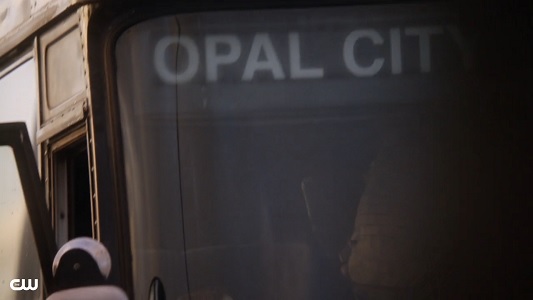 For weeks now, the CW has been running ads for The Flash‘s next new episode, “Trajectory,” playing a blues rock song over footage over Barry contending with a female speedster who has left Cisco quite smitten. Then that episode aired last night, and it revealed a Jekly/Hyde thing about an overstressed, overworked and underpaid Millenial named Eliza Harmony (Allison Paige) who took to stealing the Velocity-9 she was helping Caitlyn produce. The side effects from the speed-enhancing serum triggered an alternate personality which zoomed around the city as the speed villainess Trajectory, framing The Flash for petty theft.

Barry and his STARettes eventually emerged as the victors, although in a slight reversal for this show it was because the villain, not Barry, ran too fast (so fast she disintegrated). It was all ultimately in service to helping the team to catch up with the audience and realize Jay is Zoom. The blue lightning Trajectory gave off, and Cisco’s vibing around Jay’s old helmet did the trick. They spun some regrettable metaphors around V-9 the way an Afterschool Special might. As Collider’s Kayti Burt joked in her review:

There was even one scene involving Harry and Barry with dialogue that had to be pulled from an afternoon special on steroids. “If the game is already rigged, why can’t I level the playing field?” Barry whines to Wells. “You wanna take a shortcut? Remember this: you lose a chunk of your humanity every time you compromise your values,” Harry responds. They might as well be in a high school locker room, Barry wearing a letterman jacket and Harry with a whistle around his neck and a clipboard in his hand.

There was another fairly crucial moment along the way when Trajectory held Harry’s daughter hostage until they could supply her with more V-9. Once they did, she quickly injected Jesse with some of the V-9 to make sure it wasn’t tainted, and once satisfied she sped off.

OMG, OMG, OMG…you guys, you guys. Seriously. I mean, seriously, you know what they just did, don’t you? Jesse is now well on her way to becoming the female speedster she is in the comics where she goes by the superhero nickname Jesse Quick.

Except Jesse left Harry a goodbye message on their wrist communicators, and as he glumly listened to her proclamations about wanting to head out into the world on her own since there’s nothing for him to teach her anymore we watched her board a bus headed for Opal City.

Jesse – Harry’s daughter who was kidnapped by Zoom and whose rescue was his sole motivation for the entire season up until finally freeing her from Zoom two episodes ago – is already gone. 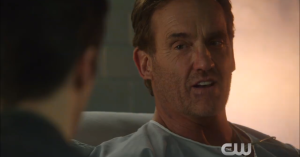 Did The Flash just seriously pull another Henry Allen on us? Barry spent the entire first season working to get his dad out of prison, and once he did Henry suddenly went on a long walkabout, only pulled back into his son’s life when Zoom almost killed him. Such an abrupt disappearance was forgiven by some as an obvious indication that Henry Allen, either the one we know or the one from Earth-2, must actually be Zoom, and the producers wanted him off screen, outta sight, outta mind to stave off suspicion. Now we know that Jay Garrick or someone who looks just like him is actually Zoom. If Henry Allen plays any role in it, that hasn’t become apparent yet.

It’s because Jesse doesn’t so much matter as a character. Not yet. She mattered as a plot motivator, and once that was resolved they realized STAR Labs was looking awfully crowded. But if so they seriously need to work on their exit strategy. The narrative of the young girl who finally leaves her parents to make her own way in the world is well understood, and Harry could understandably seem like the overbearing father to love but break free from. The impetus for her departure in “Trajectory” was largely contrived though, striking a “because of me you do bad things” chord with her dad when in actuality him agreeing to make more V-9 instead of letting Trajectory kill her seemed largely understandable.

Is this a behind the scenes issue? “Hopefully the audience will realize we’re talking about an actress who’s starring in another show, so I really didn’t have a lot of options,” is what The 100 showrunner Jason Rothenberg recently told EW to explain why a particular popular character had been written out of the show. Of course, the way he chose to write her out (no spoilers) was controversial to say the least, but the reality is that practical things like actor availability matter. Unlike The 100 fans, I doubt Flash fanatics will organize a Twitter campaign to drag down the show’s ratings in protest of the way it just temporarily put Jesse on a bus out of town.

It’s not an exact comparison. The actress in the 100 example already has another show whereas Violette Beane, who plays Jesse, is a relative newcomer with no future projects listed on her IMDB page beyond The Flash.

Whatever the reason, any future Flash arcs about saving some supporting character from imprisonment or capture might be hamstrung if we suspect that this person will just go away as soon as they’re out. That’s not to say Jesse won’t return in a big way or Henry Allen won’t significantly factor into the plot at some point. We’ll find out as the season progresses.

Did you never even care about Jessie in the first place and don’t mind to see her gone? Are you glad that Henry hightailed it out of there because the show already had enough father figures? Let me know in the comments.