18 shows in 2 days. That’s how many broadcast TV shows ended up on the chopping block as the networks cut loose dead weight in advance of next week’s upfronts. There are a variety of reasons for why it went down like this, and why Thursday and Friday quickly turned into a bloodbath. For example, there’s a new person in charge at ABC (Channing Dungey), and she didn’t hesitate to reject her predecessor’s pet projects. Across the board, vertical integration (i.e., a show is produced by the sister studio of the network it airs on) again ruled the day as did the new trend of networks favoring those shows which agree to let them start making entire current seasons available on streaming services instead of just the most 5 episodes.

It is a business, after all. Not every network can be like The CW and renew their entire schedule (and then rescue another network’s castoff, i.e., Supergirl). Heck, this year Fox canceled every single one of its new sitcoms. Meanwhile, Netflix can give a second season to a Will Arnett show (Flaked) practically no one watched or talked about, and FX can nurse a sitcom like Baskets along despite anemic ratings. They operate under different business models where the criteria for success is quite different (if not a complete mystery, in Netflix’s case).

On a major broadcast network, you can’t function like that. Showing extreme patience and faith in critical darlings like Agent Carter and Galavant is part of the reason former ABC Entertainment Chief Paul Lee lost his job.

Basically, the whole business is changing, and outside of the greyed halls of CBS anyone who says they know what they’re doing is lying. So were the people at ABC, NBC, CBS and Fox right to cancel these 18 shows? In some cases, yes; in other cases, maybe not. However, where you think the shows fall along the should have/shouldn’t have been canceled divide probably depends on which of them you actually watched.

So, among the 18 canceled shows here are the ones I actively watched this season: 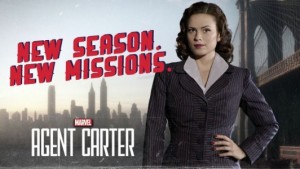 Peggy Carter was killed off on the big AND small screen in around the same week, dying in her sleep in Captain America: Civil War last weekend and falling victim to Channing Dungey’s TV show murder spree on Thursday. Hayley Atwell will soldier on in a new show ABC picked up, theoretically complicating any efforts to somehow convince a streaming network to save Agent Carter.

From a completest standpoint, one of the more vexing aspects of this is that Agent Carter is sequel to Captain America: The First Avengers but a prequel to Agents of SHIELD, seemingly always building up to the moment that Peggy Carter and Howard Stark founded SHIELD. We never actually got that point though.

Based upon the ratings, many already saw this early end coming and composed “Please Don’t Cancel Agent Carter” essays months ago. Here’s part of one from Variety:

Unlike most superhero and superhero-adjacent properties, “Agent Carter” is light, semi-comedic and has a jaunty tone. And there’s no doubt that the show works like gangbusters as presently constituted. “Carter” made a charming impression when it arrived in January 2015, and the show and its cast only improved on their admirable track record in the delightful second season, which ends Tuesday. There’s nothing to fix here, let alone improve — aside from the overnight ratings.

The good news is, we’re past the point where ratings alone are the main determining factor regarding a show’s cancellation or renewal chances. Marvel has sunk millions of dollars into the 18 hours of “Agent Carter” it has already made, and it should build on that investment with a Season 3.

Gender is an important consideration for Marvel as well. It shouldn’t keep the show on the air simply because it has a female lead, but because Peggy Carter is a wonderfully nuanced and complex female character, one who’s imbued with exceptional charisma and charm by star Hayley Atwell. Having just one major female lead in the Marvel TV universe — Jessica Jones — is not enough, and settling for that state of affairs smacks of tokenism. That is not the route a company that’s been hammered for its lack of female representation wants to take.

Alas, at the moment Peggy’s journey is at an end. Hayley Atwell will no doubt continue being one of the internet’s favorite girlfriends, and we can hopefully appreciate that a short movie made to be a Blu-Ray special feature turned into the backdoor pilot for two seasons of comic book Mad Men from a woman’s point of view.

If you are someone who thinks John Stamos is secretly a vampire thus the reason he never seems to age Paget Brewster got to be your avatar on Grandfathered, where she regularly commented on his freakishly good looks with hilarious frankness. In one scene, she simply ran her hand through his hair to see how much product was in it, expressing her extreme annoyance that his hair appeared to just be naturally perfect.

This show was built around Stamos and marketed on his appeal, and he certainly delivered a rather charming performance as a trendy L.A. restaurant-owner who suddenly learns he has an adult son (Josh Peck) who has a daughter. However, it was quite often Brewster’s effortlessly lovable performance as Stamos’ former flame which elevated each episode above pleasant, but unspectacular sitcom fodder.

The show built up enough pathos for a sudden end-of-season death in the family to land with surprising power, but by the season finale you sensed that if the show wasn’t going to come back it had at least accomplished what it wanted to do. At the start, Stamo’s character was incapable of caring about anyone other than himself. By the end, he’d been changed for the better, and his son was also a better man for having met him. They all made for a family of generally pleasant people to hang out with. It’s too bad that was cut short.

This show was about a straight-up crazy person, depicting Rob Lowe as a former TV actor who treats his entire life like a TV show and insists upon practicing law through his brother and father’s law firm even though he has no legal training. But, hey, he’s handsome, he’s a celebrity and he starred on a remarkably soapy legal show for years. Life will just work out for him like it always did on his TV show, he assumes.

How they managed to stretch this premise across an entire season is a testament to the consistently hilarious and deeply smart writing as well as the award-worthy performances from Lowe and Fred Savage as the brother, aka, the only guy who seems to realize how crazy this all is. As Hitfix argued, “The show is at its best when it isn’t telling dumb stories, but commenting on the kinds of dumb stories that other TV shows constantly tell because they’re just lazier/easier. And it so often works on The Grinder because of Fred Savage and Mary Elizabeth Ellis’ incredulous reactions to it all.”

It is, however, not exactly stunning that The Grinder never caught on at a level which would warrant a second season. As the first season progressed, it became apparent that The Grinder was one of the most meta shows in recent history, regularly skewering the tropes of both TV procedurals as well as the TV industry in general with razor-sharp whit and delightfully zany plotting. A boon for TV-obsessives, but perhaps a tad impenetrable for those who don’t yet know what the word “meta” means.

The Grinder rests, but far too soon. Behind Agent Carter, this cancellation hurts the most.

Miss Piggy is a diva you love because Kermit loves her. If he sees something good in her, there must be to her than we realize. The crucial error The Muppets made was breaking Miss Piggy and Kermit up somewhere in-between their last movie and this TV show, which imagined her as the host of a long-time talk show. Absent the reflective glow of Kermit’s adoration, Miss Piggy was just insufferable and unfunny, which poisoned the rest of the show as it struggled to perfect its balance of showbiz satire, Office-like mockumentary antics and rotating celebrity cameos. I quit after the first 5 episodes, and I never went back, even after they changed showrunners and instituted a soft reboot at mid-season.

This attempt to follow in the heels of the Sally Field movie Soapdish and show us the crazy behind the scenes lives of a cast of a telenovela soap opera was initially heralded for its diversity, targeting those Latin viewers who now regularly watch Telemundo instead of NBC. Eva Longoria was the star as well as producer, and aggressively hit the talk show circuit to promote.

However, while generally amusing and delightfully candy-colored Telenovela quickly turned into a show tailor-made to become background noise while multi-tasking (i.e., the perfect show to fold laundry to). Similar to The Muppets, much of its showiz satire was clever, but also a tad too broad. Often times, the plots intentionally mirrored the outrageous antics of a real telenovela soap opera, but if you weren’t in on the joke the show wore out its welcome. However, I would have gladly welcomed its return, if for no other reason to see more of Diana-Maria Riva as Longoria’s long-suffering best friend/costume designer.