My brother bought a house. Yay!

And I have to help him move into it today. Boo!

Correction: Well, “Boo!” might be overstating it a bit. When you’re part of a family you help each other do stuff like this. Thems the rules. Still, me lazy guy who watches lots of movies and TV shows. Me now going to lift things all day. Me going to be sore. Me not sure why I suddenly talk like caveman. Me stop doing that now.

Point being: I’m a bit short on time today (though I apparently had time to do that caveman bit, for some reason). As such, whatever amazing things I have in store for the site (or just things, really) will have to wait for another day. However, I’ve noticed my readership always falls off on the days when I don’t post anything. So, here’s a quick little something: I finally joined Letterboxd!

“What’s Letterboxd?” you say before quickly adding, “Is this yet another social media thing? OMG, seriously, like I’m not already drowning in the tweets and the Facebook vacation photos and the Instagram selfies and the Snapchat what the fucks and the Google+…okay, actually no one uses that. Still, that’s enough as it is. Why would you add to my misery? Why?”

Wow. I touched a nerve there. But, also: 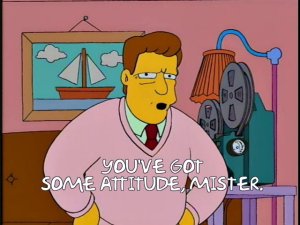 Of course Letterboxd is a new social media platform! Everybody loves a new one of those, and I will not hear otherwise. Hey, Letterboxd’s “About” section, you want to handle this one:

Letterboxd is a social network for sharing your taste in film. Use it as a diary to record your opinion about films as you watch them, or just to keep track of films you’ve seen in the past. Showcase your favorite films on your profile page. Rate, review and tag films as you add them. Find and follow your friends to see what they’re enjoying. Keep a watchlist of films you’d like to see, and create lists/collections on any given topic, for example: favorite heist films. We’ve been described as “like GoodReads for movies”.

Thanks, Letterboxd. Top form summarizing there. You could have also said, “It’s like IMDB but for cinephiles” to which IMDB users would say, “And just what the hell is THAT supposed to mean?” Oooh, I can see why you didn’t put that in there, Letterboxd. Real hornet’s nest. My mistake.

The service is currently available as an iPhone app and through a full website. Android users (myself included) are SOL as far as an app goes, though the Letterbox folks promise something real nice real soon. I just use the webs…wow, I’m really overexplaining this.

Basically, a lot of film podcasts I listen to frequently mention how they are on Letterboxd, or how you can see what film they plan on discussing next by checking their Letterboxd page. That’s what I’m using it for as well. Plus, at some point I’ll start posting shorter versions of my own reviews to Letterboxd with links back to the full reviews at WeMinoredInFilm.com, drive some of that sweet, sweet coin back to my site, get some news eyes on the various ads I have and maybe some day buy my own Playstation 4 since I sure as shit ain’t buying a house off the money from this site.

Here’s my list of films I plan on watching soon: http://letterboxd.com/weminoredinfilm/watchlist/

Better yet, here’s a screenshot of my recently watched films page:

And the same for my Watchlist:

Just in case this isn’t clear, my new Letterboxd outreach doesn’t mean I’m going stop reviewing films on the site and only post them to Letterboxd. Why the heck would I do that? No, this changes literally nothing about the site.

And now I’m off to go lift things. Should you be at a movie theater today, perhaps enjoying the meat-and-potatoes genre thrills of Morgan or “gosh, this sure is slow” melodrama of The Light Between the Oceans just know that somewhere in the MidWest I am lifting heavy objects and saying things like, “Oww, my back.” Perhaps you’ll take sympathy on me, even if for just a second. Or perhaps you’ll laugh at my discomfort, in which case: