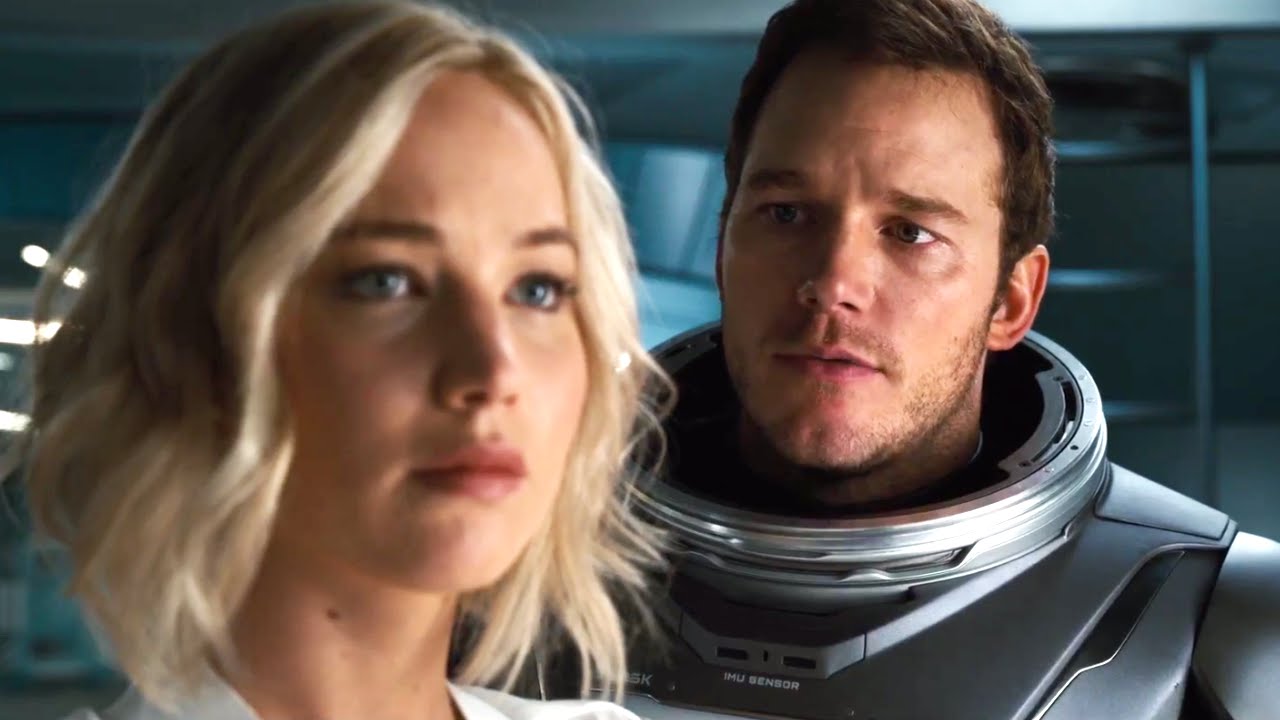 Maybe I’m only okay with this because I have a dick.

Not to be crass, but that is one of the thoughts which occurred to me throughout Passengers, Chris Pratt and Jennifer Lawrence’s new space romance saga which turns surprisingly rapey. Contrary to what the trailers lead you to believe, this tale of two outer space castaways does not begin with both of their hibernation pods malfunctioning. Pratt’s character Jim does indeed wake up 90 years too early on a ship full of 5,000 hibernating humans bound for a new Earth dubbed Homestead II. Jennifer Lawrence’s character Aurora, her name a not-so-subtle nod to Sleeping Beauty, is actually woken up by Pratt after he spends a year alone on the ship and decides he needs a companion or else he’ll probably commit suicide.

Upon seeing Aurora in her pod for the first time, Jim becomes smitten, and reads all about her in the ship’s passenger manifest, often eating his breakfast while sitting next to her pod and watching videos of her explaining why she wanted to leave Earth for Homestead II. Once he wakes her up he lies and claims she awoke due to her pod critically malfunctioning, just like him. In reality, he has sentenced her to death since she’ll never be able to go back into hibernation and will die long before the ship reaches its destination. Still, they gradually fall in love and have lots and lots of sex, her completely unaware of the role he’s played in hijacking the plans she had for her life as a writer.

Those are but some of the reactions you might have to this twist, which CBR’s Kristy Puchko memorably referred to as “repulsive” in her vicious takedown of the film and its apparent assumption of male privilege. It likely comes as no surprise to learn Passengers was directed (Morten Tyldum), written (Jon Spaihts) and produced (Neal H. Moritz, Stephen Hamel, Michael Maher, Ori Marmur) entirely by men as well as greenlit by a male studio head (Sony’s Tom Rothman, who reluctantly agreed to meet Jennifer Lawrence’s $20 million salary demand). The primary woman of note in the entire production, beyond Lawrence of course, is editor Maryann Brandon, a sci-fi specialist who previously edited Star Trek and Star Trek Into Darkness and co-edited The Force Awakens.

Yet I actually liked Passengers or at least two-thirds of it. It’s a big budget studio movie starring two of the world’s biggest film stars of the moment, yet it begins like an indie movie, its first quarter seeing Jim alone on the ship with only an android bartender named Arthur (Michael Sheen) to talk to. This section fondly recalls the opening of Moon or a space-set version of the Last Man on Earth pilot. The story from that point forward grapples with heady themes, as Spaihts told io9, “How long can you survive on your own? What is life for? How do you value your life if you are not engaged in any community? If no one loves you and you don’t love anyone? If you’re by yourself? What does your life mean if it is not witnessed?”

Things clearly take a turn for the creepy once Jim gets his first glimpse of Aurora, but this is not a plot twist entered into lightly. Jim is seen debating the decision for what we are later told was several months (not that “he knows it’s wrong” makes it okay), and while I didn’t approve of his decision to wake her up I understood it and was intrigued by the film’s treatment of the consequences. Is that because I’m a guy and thus can never fully appreciate just how appalled I should by the rape culture inherent in the film’s premise, how this should really be a complete non-starter? Perhaps, but it’s also because the film eventually acknowledges the problem with its own premise. As Spaihts told io9:

It’s not as if it’s an accidental oversight of the film, where we, through some cultural blindness, have failed to see the appalling nature of our hero’s actions. It is the subject of the film. And I think that making a movie that leaves people room to argue about what they would have done, what they could have forgiven, what they can understand or fail to understand, I think that’s great. I think that’s good storytelling. What I don’t believe the movie does is endorse or exonerate anyone. The movie looks, evenhandedly, at the dilemma everybody was in. I think putting good people in impossible circumstances makes for fascinating storytelling.

Arthur spills Jim’s secrets moments before he’s set to propose to Aurora, and her reaction is swift and without mercy, Lawrence alternating between almost operatic emotional devastation and white hot rage. In the days/weeks/months that follow, she continually rejects his attempted apologies, screaming out that she doesn’t care about his explanation or how bad he feels or how sorry he is. In one sequence, she even breaks into his room at night and beats him mercilessly as he refuses to defend himself. She stops short of using a crowbar to deliver the likely killing blow, as if suddenly discovering a moral line she’s unwilling to cross. 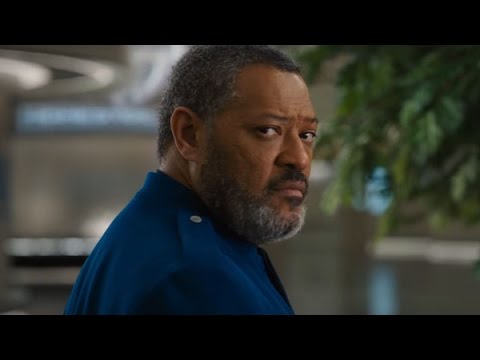 When one of the ship’s crewmembers (Lauren Fishbourne) eventually wakes up due to another faulty hibernation pod Aurora talks to him alone and refers to what Jim did to her as being tantamount to murder. When that crewmember appears less than appalled by Jim’s actions, referring to it as being clearly wrong but that drowning men will always reach for something to drag down with them, her non-verbal reaction makes her disagreement unmistakably clear.

As such, Spaihts, whose Passengers script first landed on the Black List in 2007, is not wrong. The script does attempt to look “evenhandedly “at everyone’s dilemma. Aurora is allowed her justified anger just as Jim is allowed his quiet desperation and subsequent contrition.

The twist of Jim playing both Adam AND God to Aurora’s Eve is understandably divisive and allows a creepy voyeurism to hang over the subsequent star-gazing romance. That’s not where the film loses me, though. Aurora was clearly going to eventually find out and reject Jim, and the moral and ethical quandary this whole storyline introduces is certainly thought-provoking or at least argument-inducing.

The film loses me during the ending, when Aurora becomes next to useless and completely lovestruck as Jim saves the day during an action-packed, ticking clock finale where they must repair the ship to prevent it from crashing. In a perfect movie trailer line, Aurora accurately declares, “We’re stranded on a sinking ship.”

While Aurora spends a good chunk of the film’s second half unable and unwilling to even be around Jim because of what he’s done to her the thought of losing him and leaving her alone on the ship turns her completely around during the finale. The answer to what could Jim possibly do to earn her forgiveness is to commit the most selfless act imaginable, volunteering his life to save the ship and everyone on it. However, then she spacewalks out to save him, revives him in a medical pod and they live happily ever after, or at least they do after she is given a chance to re-enter hibernation alone and rejects the offer in favor of growing old with Jim.

It feels focus-grouped to death, as if they had multiple endings (i.e., he dies saving her, she goes back in hibernation but Jim doesn’t, they live happily ever after) and went with the one which sent the most people home happy as well as the one that morally absolves Jim (she now chooses to be with him even though she could have gone back in hibernation). SlashFilm dug in and discovered at one point between 2007 and now the script had an entirely different ending involving all of the hibernation pods being ejected on accident thus meaning Jim technically saved Aurora by reviving her, not that he had any way of knowing what was going to happen.

As constructed in the finished film, the ending pays off Aurora’s arc of realizing she’s always been chasing adventure to live up to her family legacy (her father was an F. Scott Fitzgerald type) while often failing to recognize the more mundane adventures in front of her. In this case, the adventure she’s overlooking is a potentially fulfilling romance with a man she loves, but, yeah, their relationship was built on a lie.

Passengers is meant to be the ultimate tribute to “it’s the journey together, not the destination that matters.” As Tyldum told io9, “These characters are stuck in time, they are now. Part of me says that’s appealing because all of us going worrying about the future. And it’s learning to have the most fulfillment of what’s going on now.” That’s why the film ends with the central couple embracing the here and now together on the ship instead of some vaguely defined future on an unfamiliar planet. However, this supposedly happy ending is too hard to swallow, and does not pay off the headier ideas and controversial twists introduced in the film’s first two-thirds.

What did you think? Are we all overthinking this? Or have I been far, far too lenient on this creepy, male space fantasy? Let me know in the comments.