According to Vulture’s TV Critic Jen Cheney there are four possible camps you can fall into on HBO’s Twin Peaks-esque new series The Young Pope:

Is it weird that I think it’s actually all of those things all at once, both cheeky AND serious about power and faith, both emptily self-indulgent AND thought-provoking and scary for its timely (unintended) commentary on the type of forces currently overtaking the world (not just America)?

Of course, you could also add another group, roughly categorized as those who are simply disappointed The Young Pope can’t be so easily reduced to an internet meme now that it’s actually here and not just some abstract, easily mocked title and poster. Thus ends my obligatory reference to the fact that Twitter and elsewhere had a lot of fun mocking The Young Pope to the point that Jude Law had to be educated as to what a meme even is.

The pilot, which premiered on HBO this past Sunday followed by the second episode Monday night, opens with Jude Law emerging from the base of a human tower of babies, just the first part of what turns out to be a double-fake out dream sequence. The babies were obviously a dream, but so too is his first public address as pope which goes so poorly he is instantly deposed by those who won’t stand for his radical views. He shouts out about the joys of masturbation, homosexuality, sex out of wedlock, sex for pleasure instead of procreation, science-assisted pregnancies and other such progressive views, causing the gathered masses below him in Vatican City to look up quizzically. There’s even a shot of a group of grey-haired, panicked priests inside the Vatican streaking for the door as if Godzilla had just put his giant foot down in their hallway, yelling, “Help us!” on their way out.

But, hey, gotcha! This is all a dream. Pious chuckles while later describing it to one of his underlings as an interesting dream in which he said the most preposterous things. See, that’s the bait-and-switch of The Young Pope. By its very title, you’d expect this to be a series about some young upstart giving the Catholic Church a rude kick in the ass and ushering it into the 21st Century. For some reason, I pictured a King Ralph-style comedy of contrasts, Jude Law as the ignorant American comically ruffling feathers with those stuffed shirt types who just aren’t having it.

However, that’s the twist – though Pious may look young he’s very old on the inside, eager to pursue an ultra-conservative agenda while seizing as much power as possible and more or less viewing himself as God even though he might secretly be an atheist (because if Pious’ parents could have abandoned him to an orphanage as a child then how can there really be a God?). The dream sequence speech we see gives us what we likely expected, but it is the complete opposite of the actual speech he delivers at the end of the second episode, where he more resembles an egomaniacal tyrant with outdated views than a Pope.

And I still don’t know what to make of it. When I read back what I’ve written thus far it makes The Young Pope sound perfectly compelling, certainly capable of delivering a good narrative hook at least. However, I’ve left out the many “WTF?” moments where you’re genuinely unsure if you’re supposed to laugh or not, such as when Pious insists on keeping the kangaroo gifted to him by a foreign government which assumed it would ultimately end up in a zoo. 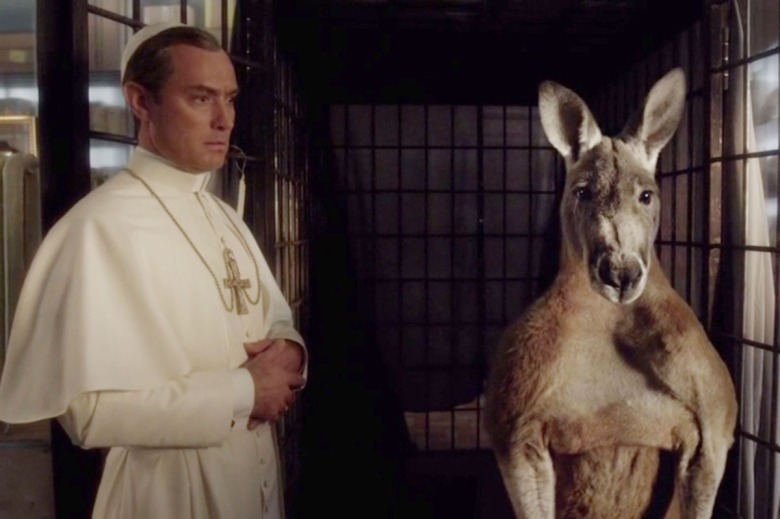 There’s also a near-complete lack of likable characters (they don’t have to be likable to be interesting, of course), wild shifts in tone (and accompanying musical score, foreboding strings one instance, light indie guitar the next) and a House of Cards/Game of Thrones-esque power struggle between Pious and his closest supporters (chiefly, Diane Keaton as the nun who raised him) and those establishment figures in the Vatican who quickly realize their way of life has come under attack by a possibly deranged man. Seeing Diane Keaton navigate the murky politics of the Vatican does also have the unintended consequence of forcing us to remember Godfather III, which deals with corruption in the Church.

Most of the critics who have reviewed Young Pope seem to have seen the first five episodes (the full 10 episodes aired in Italy and Italy alone late last year), and argue the show finds more clarity and reveals its deeper ambitions in the later episodes. As Tim Goodman of The Hollywood Reporter eloquently put it, “Early episodes are a combination of off-kilter weirdness and dry humor, but the series begins to shift into a less eccentric mode quicker than may be expected and, after five episodes (half of the first season), the show becomes a surprisingly serious meditation on loneliness and faith.”

But I’m not there yet. I also haven’t really seen an Italian TV show before, which is what this is, albeit as a co-production between HBO and the Italian backers. As such, there might be a cultural dissonance at play here, leaving me to adjust to director-writer Paolo Sorrentino’s vision of a 10-hour movie which isn’t in a hurry to get anywhere and never tips its hand if we’re supposed to be laughing with or at it (I suspect it’s the former and not the latter; You don’t put Diane Keaton in a shirt which reads “I’m a Virgin, But This Is An Old Shirt” and not expect us to laugh). Beyond the questions of tone there’s also the uncertainty as to whether the show is actually as interesting as it things it is, exploring as it does the life of a suddenly powerful dude in his 40s with serious unresolved daddy and mommy issues. The result is one of the odder shows I’ve ever seen, at least among prestige cable shows (don’t worry, John from Cincinnati, Young Pope hasn’t unseated you yet). It’s also a show I can’t stop thinking about. Seriously, what is with that kangaroo? Is it supposed to symbolize God somehow? I’ll keep watching to find out.

What about you? Which of the four Young Pope groups do you fall into, if any? Are you laughing with or at the show? Or is it a little of both? Or could you not wait for this pretentious pile of you-know-what to end so you could get back to your binge of Netflix’s Unfortunate Series of Events? Let me know in the comments.