For around half of its running time, The Great Wall plays like a more colorful version of The Battle of Helm’s Deep from Lord of the Rings: The Two Towers, but then it gives way to a muddled third act relying on the ole “kill the queen, kill the army” sci-fi trope. Oh, plus, Matt Damon’s around shooting CGI arrows and speaking in one of the strangest movie accents (Is it Irish? Spanish? Just a gruffer version of his normal speaking voice? All of those at once?) I’ve ever heard. The whole thing will probably be regarded by many as mindless, “so bad it’s good” fun while being feared by others as a far-too-accurate window into our potential future of unabashedly silly China-U.S. co-productions.

Personally, though, I was surprised to find The Great Wall fairly watchable, spectacle you don’t mind looking at thanks to director Zhang Yimou’s swirling camera and inventive action choreography. In lieu of writing a traditional review, I thought I’d instead discuss the film in a Q&A format, pondering the answers to 7 questions you might have based on The Great Wall‘s often unflattering press coverage:

1. How offensive is the white savior narrative? Does Matt Damon free the slaves while also dancing with the wolves, falling in love with blue people and writing a book about how bad she felt as a young white woman in the Deep South watching her peers thoroughly mistreat the African-American help?

Ever since its first trailer premiered last July, The Great Wall has been the subject of considerable ridicule on this side of Atlantic for its white savior narrative whereas people in China couldn’t have cared less (in fact, many over there had to have the concept of “whitewashing” explained to them). Now that it’s here, some critics (such as The Washington Post’s Ann Hornaday) think the white savior criticism has been overblown whereas others (such as Vulture’s E. Alex Jung) find it entirely on point. I side more with Jung, who argued:

While the Chinese clearly demonstrate impressive technological might, the narrative revolves around Damon’s character: His actions, bravery, and ingenuity are what propel the plot forward. Most troubling is the fact that the Chinese, both visually and narratively, are often represented as their own kind of indistinguishable horde — shields to be raised, bodies to be killed, etc.

In the film, Matt Damon and Pedro Pascal play European mercenaries in search of a new weapon in China called black powder. They end up as prisoners on The Great Wall, and observe first hand as the soldiers there fight off an invading army of dragon-like creatures called Taoitei. Due to what they have seen, they are told they can never leave since the rest of the world cannot know China’s big secret (i.e., that they accidentally unleashed monsters into the world).  However, Damon’s unrivaled skills as an archer as well as his decades of battle experience in all manners of war throughout the entire known world quickly proves invaluable. Thus, there are indeed multiples scenes where Chinese characters fret over their next military move before Damon offers a suggestion and they all go, “Yes! We’ll do that!”

The counter-argument is that Damon’s character is not the savior but a foil to the superior honor and morality of his Chinese counterpart, chiefly represented by Jing Tian as the translator/second highest in command. Yeah. Kind of. Sort of. But the arc of the story is for Tian to inspire Damon to finally find something worth fighting for other than money and food, and to be the person to turn the tide in a seemingly unwinnable battle.

It’s not, strictly-speaking, whitewashing since Damon isn’t playing a character who should be played by an Asian actor, but it is definitely a white savior narrative.

That being said, Great Wall at least deserves credit for giving the second lead role in this action blockbuster to a kickass woman (Tian) who is neither a love interest nor a damsel in distress. In that regard, it could be considered progressive.

2. How cool are the action scenes? 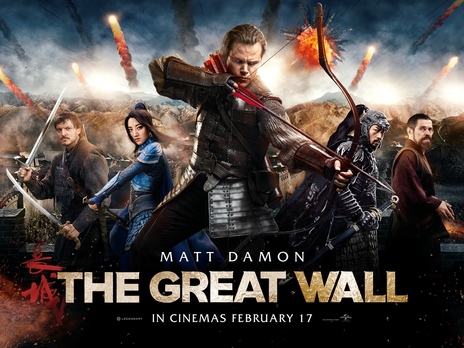 You would think it would grow monotonous watching one humans vs. monsters battle after another on the same damn wall, and the 6 credited screenwriters clearly feared as much, [spoiler alert] choosing to transfer the action in the third act to an actual city. However, one of the bigger surprises of the film is how inventive it is in actually keeping the action fresh despite mostly taking place in the same setting.

The initial battle occurs in broad daylight, with the soldiers’ glistening, color-coded, Power Ranges-esque costumes (blue for women, red for archers, etc.) on lush display as they are dropped off the side of the wall to stop the oncoming hordes of monsters and then pulled back up like human tea bags. Every subsequent battle scene is somehow different in a crucial way, be it the time of day, level of visibility (one sequence in a dense fog particularly stands out), army sizes or weaponry (from simple bows and arrows and spears to bombs and something Jung accurately referred to as “wall-scissors”).

This variety certainly keeps things interesting, but the oddly unrelenting 3D-friendly shots (so, so many things flying straight at the camera) and slow-motion action beats grow old fast, not too fondly recalling that post-Avatar period when Hollywood went 3D crazy.

3. Do the special effects look on par with an actual Hollywood blockbuster?

With a budget of $150 million, The Great Wall is the most expensive film in China’s history, and upon its release in December many Chinese moviegoers were wowed by the special effects. As a 22-year-old college student told the Global Times, “The scenes are great. I never thought a Chinese film could look like a Hollywood blockbuster.” It probably looks that good because the special effects were handled by the powerhouse duo of Industrial Light & Magic (ILM) and Weta Workshop. So, as far as CGI monsters go the Taotei are perfectly acceptable.

There is, however, a limit to what you can get out of $150m when your film calls for so many visual effects shots. As such, mixed in with Great Wall’s otherwise strong effects work are various sequences which look almost a decade behind the times, particularly during the third act when Damon and Tian dip into the action cliché playbook and jump toward the screen as a fireball threatens to engulf them from behind. The thought “I’ve seen better special effects on the SyFy Channel and CW” should never occur to me when watching a Hollywood blockbuster, but here we are.

4. Do any of the Chinese characters get anything to do?

There are so many Chinese characters who, either due to an actor’s performance or their high-standing in the army, initially seem important only to barely be seen again, if at all. It’s thus tempting to wonder if there’s actually an alternate cut of this movie told from the Chinese point of view, with Damon’s moral angst mere background noise to the life or death battle being waged against the monster by the brave Chinese soldiers fighting for country, honor and each other. Maybe the rest of the world got the Flags of Our Fathers version of Great Wall while China got the Letters from Iowa Jima version?

Nope. Aside from differing subtitles depending on local languages, we all got the same version of  the movie. Damon, Pascal and Willem Defoe (as a fellow imprisoned mercenary) hog most of the screen time. Among the Chinese cast, a perpetual fuck-up played by Lin Mae is the only character who has what could loosely be considered an “arc.” Jing Tian receives the majority of the Chinese character screen time, but she goes from believing in the power of “trust” to, um, having her faith in that “trust” confirmed?  Mae, on the other hand, reminds Damon of his younger self and their quasi-bond helps the former reach a moment of selfless heroism.

Interestingly, at the time of its release many in China were less than enthused about Tian’s performance. I admit to an uncertainty over whether you can attribute her sometimes wooden line readings to performance or language barrier (or both). Maybe she’ll be better in Kong: Skull Island and Pacific Rim: Uprising (each produced by Legendary, just like Great Wall).

5. Does that one dude from Game of Thrones get his face smashed again?

No. Without spoiling whether or not Pedro Pascal’s character survives the story, I can at least say he doesn’t get his face smashed ala Game of Thrones.

6. Will I have to read subtitles?

Yes. Only two of the Chinese characters speak English. So, even though the majority of the film is in English there are still subtitles from time to time. Pity the people in China, though, who had to watch it with far more subtitles (as indicated in the above screenshot from the Chinese version of the movie).

The Great Wall is a cultural curiosity, a first of its kind production which, if successful, will be replicated and improved upon in the future. From that point of view, it’s almost impossible to resist the temptation to gaze upon this silly, frustrating, oddly watchable mess of a movie which doesn’t add up to much but still contains some undeniably inventive action beats.

But that’s the movie nerd in me talking. If you’re simply thinking of going because you like Matt Damon then prepare to be disappointed.