On the face of it, Sony’s announcement yesterday that its Venom movie is definitely still happening and now has a release date (October 5, 2018) might seem completely random. It’s not. It’s just a classic game of release date dominoes.

To recap, we have heard literally nothing about this movie in over a year, at which point THR reported Sony had decided to make a standalone Venom movie (meaning completely unconnected to Spider-Man: Homecoming) to be written by Edge of Tomorrow’s script doctor Dante Harper, possibly directed by Alex Kurtzman and produced by Amazing Spider-Man screw-ups Avi Arad and Matt Tolmach. Now all of a sudden Sony is telling us the film not only has a release date but also two new writers, Scott Rosenberg and Jeff Pinkner, who are individually responsible for movies like Con Air, Gone in Sixty Seconds and The Dark Tower but have previously teamed up on the Jumanji remake. On top of that, Alex Kurtzman is officially out. What gives?

December 22, 2015: Sony Animation announces its animated Spider-Man movie, which we’ll later learn is to be focused on the Miles Morales version of the character, has been pushed back from Summer 2018 to December 21, 2018.

Then a whole lot of nothing until the dominoes starting falling over the past 7 days:

March 13: Sony announces the Girl with the Dragon Tattoo sequel is back on with a new director (Fede Alvarez) and stars (yet-to-be-cast replacements for Rooney Mara and Daniel Craig). A release date of October 5, 2018 is claimed, putting The Girl in the Spider Web in direct competition with Aquaman.

March 16: While announcing the release dates for a wide variety of movies, Warner Bros. casually lets it slip that Aquaman has been pushed back from Oct. 5 to Dec. 21, thus taking the more desirable date vacated by Avatar 2, leaving The Girl in the Spider-Web all by its loneseman in October and looking over at Sony’s animated Spider-Man movie and more or less saying, “I will crush you!” Man, the balls on WB to pull this shit again, remembering that they previously tried to use Batman v Superman to challenge Marvel’s claim to May 6, 2016 before running away screaming when that Marvel movie turned out to be Civil War.

March 16: Less than two hours after WB’s Aquaman announcement Exhibitor Relations, a firm which claims to have been providing research and data to the film industry for 40 years, tweets: “Watch out, Spider-Man. VENOM is now part of the release date calendar web as Sony has slated the Spidey spinoff for October 5, 2018.” Sony, seemingly, has been scooped, forcing them to step forward with clarification…

March 16: An hour after that Exhibitor Relations tweet Sony confirms the release date news to The Hollywood Reporter, also clarifying that Girl in the Spider-Web has been pushed back to Oct. 19 to free up Oct. 5 or Venom. Moreover, Venom has no director, but it does have a finished script from Scott Rosenberg & Jeff Pinkner.

March 17: The fan theory explodes online that Sony’s upcoming “outer space scientists discover a small new lifeform that grows larger and turns on them” sci-fi flick Life might be a cloak-and-dagger Venom origin story ala [spoiler] Split being a surprise origin story for Unbreakable 2’s potential villain. Further supporting this theory is the fact that Life’s screenwriters Paul Wernicke and Rhett Reese (now best known for writing Deadpool) actually penned a Venom screenplay together back in 2008. Could Sony be announcing Venom as precursor to a whopper of a surprise with Life?

That intriguing fan theory aside, this kind of release date tango is increasingly common in the age of peak blockbuster, and quite often results in studio’s hastily claiming release dates for movies which never end up being made or take far, far longer to arrive than expected. See: Amazing Spider-Man 3, Fantastic Four 2, Gambit, Terminator: Genisys 2 and 3, Avatar 2, Pirates of the Caribbean 5, etc. 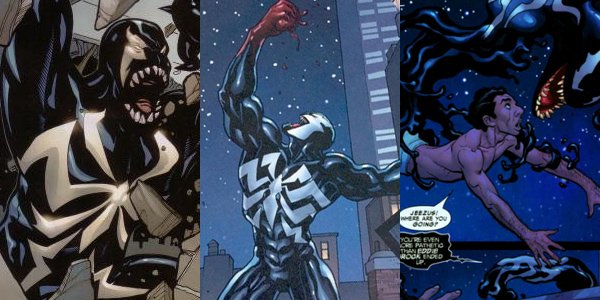 Thus, nothing has fundamentally changed about Venom since last year. Different writers, no director, but same two producers (plus ousted Sony head Amy Pascal), same plan to make it a standalone franchise, same high likelihood that they’ll fuck it up or never truly get it off the ground. What has changed is the circumstances in the industry, the success of Logan, the winds possibly ever so slightly shifting away from “it’s all connected” franchise world building and more toward “let’s just get back to making good individual movies like Deadpool and Logan.” That might give Sony the will to finally make Venom happen, but this doesn’t have the MCU/Kevin Feige-brand of approval the way Spider-Man: Homecoming does. Instead, it’s coming to us from the people behind the decent, but ultimately disappointing Amazing Spider-Man 1 and 2, and they’ve been promising us a Venom movie since 2007. We’ll believe it when we see it.

For now, skepticism, frowny face and all that, a common sense belief that this is all due to standard Hollywood release date dominoes. If that Life fan theory is right, though, well then this is a whole new ballgame. Urge to see Life, rising.

Do you buy the Life fan theory? Are you, like me, laughing at WB’s same ole crap of challenging other comic book movies’ release dates for no good reason? Or have I buried the lead because, screw all this comic book nonsense, we’re getting more Girl with the Dragon Tattoo movies? Let me know what you think in the comments.