In late 2013, Sony gathered a cabal of screenwriters to form, as the press release put it at the time, “a franchise brain to expand the universe for the [Spider-Man] brand and to develop a continuous tone and thread throughout the films.” Alex Kurtzman, Roberto Orci, and Ed Solomon were responsible for writing a Venom movie, which Kurtzman was also going to direct; Drew Goddard was charged with writing and eventually directing a Sinister Six movie.

The message: Suck it, Marvel Studios. You’ve got your Marvel Cinematic Universe? Whoopity Doo! We have our Spider-verse! 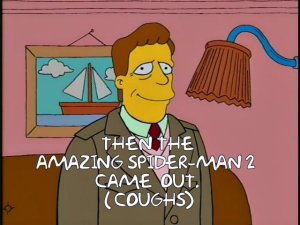 The extended Spider-verse died before it started because The Amazing Spider-Man 2‘s failure (however dubious that would seem, financially) inspired Sony to start over from scratch. Spider-Man was loaned out to Marvel to let him appear in Captain America: Civil War, and in return Kevin Feige will co-produce a new solo Spider-Man movie due out July 7, 2017.

But Venom refuses to go away. According to THR, Sony is revisiting their plans for a Venom movie, and Dante Harper, an up-and-comer who did rewrites on Edge of Tomorrow, has been hired to pen a new script. Good luck to him because Venom has been in development hell since 2007. Maybe this time will be different.

Here are 3 different angles you can take on this story:

Comic book movies used to just be, well, comic book movies. They didn’t have to be part of an interconnected cinematic universe. Make one comic book movie. If it does well, make a sequel. Keep doing that until it ceases being profitable. Business as usual for Hollywood.

Then The Avengers happened. Now cinematic universes are the currency of the realm, to the point that it has spread beyond comic book adaptations to the Transformers, Universal movie monsters and King Kong and Godzilla. Even a 21 Jump Street and Men in Black team-up movie is happening now even though that’s the type of thing the 22 Jump Street closing credits sequence mocked.

Deadpool is technically part of that trend as it does connect to Fox’s X-Men universe, but the movie itself mocks how impossible it is to follow the X-Men film continuity anymore. As a result, Deadpool often has the feel of a standalone comic book movie, even though X-Men like Colossus and Negasonic Teenage Warhead are around and Xavier’s mansion is glimpsed multiple times.

Venom is taking that one step further. According to THR, it is “being envisioned as a franchise apart from and unrelated to the upcoming Spider-Man movie.”

There might be legal reasons for why Sony has to keep this separate from their new Spider-Man continuity, possibly related to their deal with Marvel, but I’m inclined to believe this has a lot to do with Deadpool. That was a movie about an insanely popular anti-hero who had been granted a completely embarrassing adaptation in a prior live-action movie (Origins: Wolverine, may we never speak of it again). Sound familiar?

Deadpool got it right by moving away from cinematic universes and four-quadrant, PG-13 considerations. Now Fox has a new film franchise on its hands. Sony’s looking over at them and wondering, “Why can’t we do that?” That’s not suggest they’ll turn Venom into a R-rated movie. No one connected to this is saying that’s what they’re doing. However, they most certainly owe a considerable debt to Deadpool, either way.

2. Which Version of Venom Will They Use? 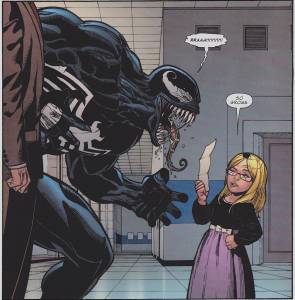 There’s no official indication yet. Obviously, they have several options, although you can immediately eliminate Peter Parker from the list. He first encountered Venom as a mysterious, but cool new black suit in 1984, only later realizing it was actually a symbiotic, sentient alien. When the symbiote transitioned to Eddie Brock, it took all of Spider-Man’s powers with it, and Brock christened himself an anti-hero named Venom.

Eventually, Brock had to part ways with the symbiote as it was becoming increasingly bloodthirsty and controlling. It has since jumped to multiple other hosts, again emerging as an abusive figure to its next host, Mac Gargan. As of late, Venom’s host has been former high school bully Flash Thompson, in more of a mercenary role controlled by the government.

Somewhere along the way, Venom had two different female hosts (Eddie Brock’s ex-wife, a U.S. Army specialist) as well as an additional male host (a mafia boss’ son) who fell to his death after the symbiote abandoned him. 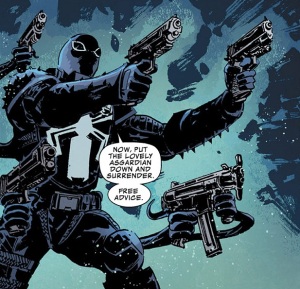 My guess is they will use the Flash Thompson version (pictured above) because that’s the most obvious pick if the question they asked was, “What can we do that is most like Deadpool?”

3. Those Guys Aren’t Going Down Without a Fight

Kevin Feige and Amy Pascal are producing the new Spider-Man movie, but they’ll apparently have nothing to do with Venom, which is being overseen by Avi Arad and Matt Tolmach.

Remember those guys? They’re the ones who produced The Amazing Spider-Man 1 and 2. In fact, there are no commonalities in cast, writing or directing from the Sam Raimi Spider-Man movies to the Marc Webb ones, but they all share the same producer: Avi Arad. He was a longtime Marvel Comics higher-up who left the mothership over a decade ago to oversee all of the Spider-Man films. You might remember him as the one who said that as long as he was around they would never do the Miles Morales version of Spider-Man on film.

The fact that Sony managed to push Arad aside to make its deal with Marvel Studios was somewhat of a shock at the time. You can’t get rid of him that easily, though. He left everything at Marvel behind for the rights to control the Spider-Man movies, and now that Spider-Man has been taken away from him he’s moved on to Venom.

How do you even do a Venom movie without Spider-Man since it is through exposure to Spider-Man that Venom gains most of his abilities?  Also, who could be used as his adversary? Carnage? Those are the types of questions Dante Harper will have to figure out as he moves forward on a new Venom script.

Your thoughts? Were you first afraid, then petrified? Did you keep thinking how you could never live without Venom by your side? Don’t worry. You will survive, hey, hey.