We’re all drowning in the age of peak TV. Here’s a life preserver you can use to pull yourself over to one show you might like: Wynonna Earp

SOURCE MATERIAL | Beau Smith’s comic book series which debuted in 1996 and was revived in 2003 and 2011. A brand new, limited run tie-in was published to coincide with the show’s first season last year.

NUMBER OF EPISODES | Thirteen 43-minute episodes over the first season.

PREMISE | Crazy chick with a gun!

SERIOUSLY, THAT’S THE PREMISE? | No, but it’s the funny line the titular Wynonna (the perfectly cast Melanie Scrofano) yells in the second episode while shooting in the air to clear out a nightclub full of innocent civilians who are completely unaware of the dangerous demon in their presence.

THAT SEEMS FAIRLY STRAIGHT-FORW… | Wait. There’s more. Wyatt’s secret battles with real life demons and devils resulted in his blood line being cursed, setting up a perpetual loop where once his heirs turn 27 if they are oldest among their siblings they take on special powers and are duty-bound to hunt down the resurrected versions of Wyatt’s old enemies, now called revenants. These revenants look like normal people, and cannot leave the general geographic region of a town called Purgatory, which is where Wynonna grew up. It’s kind of like a hellmouth with stricter borders.

CURSED BLOODLINE? CHOSEN ONE? HOW BUFFY THE VAMPIRE SLAYER OF THEM.. | Wait. There’s still more. The only thing which can send these revenants back to hell is Wyatt Earp’s old gun, dubbed Peacemaker, when wielded by his heir. Thus, Wynonna carries a pretty big ass gun. She just has to figure out how to use it.

AND IS THAT IT? | Not quite. When Wynonna was a little girl, a group of revenants attacked her home and dragged her father and older sister Willa away. To spare them the torture the revenants no doubt intended to visit upon them, Wynonna used Peacemaker to kill her father, but was unable to mercy-kill or save her sister, whose body was never recovered. However, no one believed Wynonna’s story, resulting in her being separated from her younger sister Waverly and forced to bounce around from mental facilities to foster homes before she left town and bummed her way through Europe.

In the pilot, she returns to Purgatory for her uncle’s funeral, and is stunned when upon her 27th birthday she does indeed gain all the powers her father told her about. Newly emboldened by the knowledge that she was never crazy, she makes it her mission to hunt down the revenants who attacked her home all those years ago, but must fall in line with Dolls’ orders, re-connect with Waverly (adorably played by Dominique Provost-Chalkley like a western Kimmy Schmidt) and figure out what the heck is up with the new guy (played by Tim Dozon) in town who walks, talks and dresses like he arrived straight from the 1880s OK Corral.

THAT ALL SOUNDS WAY TOO COMPLICATED | It’s not. At its heart, Wynonna Earp is a classic western revenge story (at least initially) just with a female protagonist and fresh infusion of horror story elements. There is much exposition to sort through, but it’s all perfectly doled out in the pilot. By the second episode, the show has already settled into a groove which should be familiar to genre fans. Think of Wynonna as a twentysomething Buffy Summers mixed with Jessica Jones (she certainly shares Jessica’s fashion sense). Her sister, relegated to recon and research duties for the cases-of-the-week, is early era Willow mixed with Xander. The mysterious fella they initially mistake for a cosplaying Wyatt Earp-superfan is their Angel. Her boss, Agent Dolls, doesn’t really have a Buffy counterpart, but his no-nonsense exterior hides a softer side as well as a complicated backstory which slowly come out throughout the season. 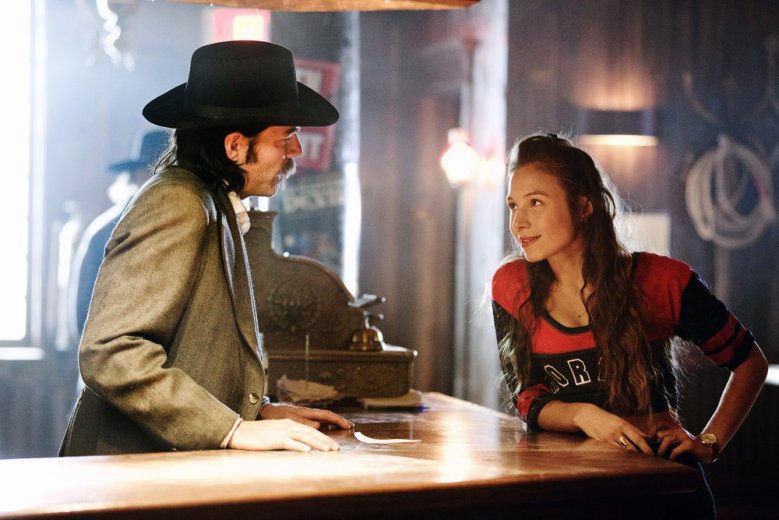 Or, if you prefer Supernatural to Buffy Wynonna is Dean, Waverly is Sam, the mysterious stranger is Castiel and Dolls is…well, again Dolls is kind of just Dolls.

DOESN’T SYFY ALREADY HAVE A SHOW LIKE THIS? | Yes and no. In addition to Wynonna Earp, SyFy has Van Helsing, which is also based on a comic book and also details the trials and tribulations of a female heir (Vanessa Van Helsing) of a famous male hero (Abraham Van Helsing). However, Wynonna Earp actually debuted four months earlier than Van Helsing, and while there’s clearly a very similar formula at play the shows are hardly carbon copies of each other. For one thing, Van Helsing takes place in a post-apocalyptic world whereas Wynonna Earp is about keeping the revenants and other monsters stuck in Purgatory and away from the normal outside world.

WHAT MAKES IT SO GOOD? | In the age of peak TV, we are not only drowning in new TV shows but also different kinds of shows. There are plenty of high-quality prestige dramas and dramedies which feel like homework, often times wonderfully rewarding homework but homework nonetheless. Wynonna, on the other hand, is true to the spirit of the dime store pulp novels of yesterday. The result is a fun show, the type you can escape into and know that even with all of its inherent silliness there is a strong feminist undercurrent to it all. It is the TV show equivalent of a light-hearted page-turner you read before going to bed, staying up later than you intended because the story keeps revealing hidden depths beneath the monsters and big guns.

For example, the second episode includes a meet-cute between Waverly and Purgatory’s new deputy, a flirty redhead (Katherine Barrell, like an American Karen Gillan) who makes no secret about her sexual orientation. A flustered and heretofore heterosexual Waverly mumbles, “I’m in a relationship with a boy, I mean, a boy-man,” eliciting laughter from the deputy who leaves behind her card and a standing offer to get drinks sometime. Waverly reads the card and laughs while saying aloud, “Office Haught? Of course.”

Yep. That’s right. Wynonna Earp is the type of show where an objectively hot new character can actually be named Officer Hot (just spelled Haught). However, while that might be a dismissible offense for certain viewers it proves rewarding for those who are willing to drop in and stick around because then you get to witness Waverly’s season-long, GLAAD-nominated realization of her true sexual identity, leading to an eventual pairing which is easily the strongest romantic relationship in the show’s young history. And, spoiler alert, the first season ends without ever falling prey to the “bury your gays” problem.

And that’s just a side story in the season. In truth, even with Dominique Provost-Chalkley’s irresistibly lovable performance as Waverly this is Melanie Scrofano’s show to either make or break. Her Wynonna could so easily come off as faux-badass, surface level snark buried under an unconvincing performance. However, Scrofano capably handles the part of the town problem child who is quicker with a quip than with her own gun, and simultaneously rages against the cruel twist of fate which cursed her while also growing to love the way the curse and working with Black Badge has actually given her a purpose in life.

Plus, the season as a whole is cleverly constructed, setting up a solid revenge quest which is seemingly resolved earlier than expected and leaves an emotional hole in the hero as well as tantalizing “what do we do we now?” question before concluding with a twist-filled final run of episodes. If you make it that far you’ll be dying to see what happens next since the finale closes on a “holy shit!” cliffhanger.

AND HAVE A TOLERANCE FOR… | Sub-par special effects, Occasional overacting from guest stars, The idea of a show seriously having a big bad named “Bobo”

TELL ME THERE ARE GRATUITOUS SHIRTLESS SCENES FOR THE GUYS | Like you actually had to ask. Wynonna’s reaction to seeing Dolls’ shirtless for the first time is priceless.

MY FAVORITE PART OF THE SHOW | Wynonna and Waverly’s unshakable bond.

MY LEAST FAVORITE PART OF THE SHOW | The somewhat unnecessary love triangle Wynonna eventually gets caught in.

IS IT COMING BACK? | Yes. The 12-episode second season will premiere on SyFy in June.

WHERE CAN I WATCH THE FIRST SEASON? | Netflix or, if you have a cable subscription, the SyFy Now app