Brillint because how could a new show based on an acclaimed Neil Gaiman novel, adapted by Hannibal’s Bryan Fuller and starring Deadwood’s Ian McShane be anything other than perfection?

I have absolutely no idea what’s going on because (as someone who hasn’t read the novel) the pilot is astonishingly disjointed and artfully obtuse. It takes the entire hour for the narrative to feel as if its finally starting to flow naturally, and director David Slade’s consistent use of slow-motion to accentuate the many visual flights of fancy might look gorgeous on a shot-by-shot basis but also borders on Zack Snyder-level slow-mo for slow-mo’s sake. Yet you’ll also be reluctant to look away for fear of missing out on the next crazy thing lurking around the corner, like a bore with fiery eyes advancing toward the camera or a character’s face suddenly melting in Claymation.

When you actually try to describe the plot it doesn’t sound that complicated [spoiler alert]: fresh out of prison, Shadow Moon (Ricky Whittle, who takes nearly the entire pilot to finally find his footing) is hired to be a bodyguard for the mysterious and clearly secretive Mr. Wednesday (McShane, wonderful as always). Strangeness quickly ensues as Shadow is forced into a bar fight over a gold coin with an angry, tall leprechaun who doesn’t take kindly to those who assume all leprachauns are short. Then Shadow travels back home for a funeral and is abducted, thrown in the back of a supernaturally long limo and shaken down by a tech-obsessed, self-proclaimed god and his gang of henchman lifted straight out of Clockwork Orange. Cue up an operatically violent fight scene/attempted lynching, and then roll the closing credits and “This Season on American Gods” trailer. 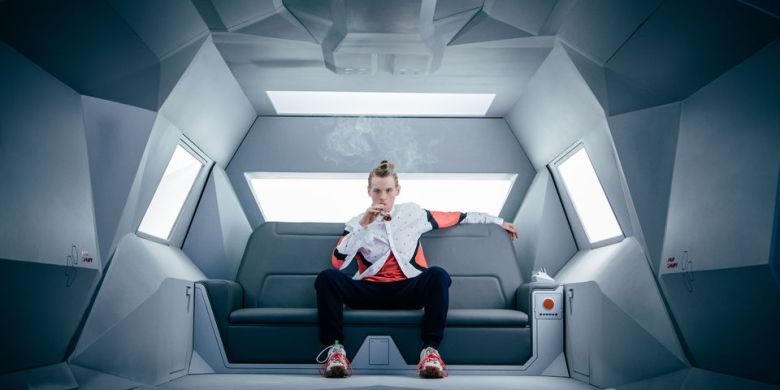 In other words, a seemingly normal man is exposed to a strange new supernatural world via a wise stranger who knows more than he’s letting on.

But I forgot to mention the random, completely unexplained scene in which an unnamed black woman has sex with an older divorcee, and at the moment of climax she gradually sucks his entire body into her vagina.

Right. So, um, I don’t think Joseph Campbell covered that. Is this maybe just a really, really kinky, avante-garde hero’s journey? A hero’s journey that has been art directed within an inch of its life? Sure, let’s go with that.

The general idea is that Shadow has accidentally wandered into a war between old and new gods, with Mr. Wednesday being an old god and the menacing stranger in the limo a new god. You partially pick up on that via dialogue, but also might simply know it if you’ve ever read the back cover description of Gaiman’s novel.  Plus, the notion of the gods interacting with humanity is somewhat thematically set-up by the voice-over accompanying the comically violent opening scene depicting the Vikings’ quickly thwarted attempt to colonize America centuries before Columbus.

However, as THR argued:

The problem for American Gods in the early going is that its creators’ wild ambition is running a bit amok and interfering with its execution meaning the most pressing distraction — more so that the buckets of blood and intense sexuality — is trying to understand what’s going on and what the series is all about, beyond the fact that old gods and new gods are about to go to war. The series is both rooted in realism and rife with otherworldly activity. It’s as visually appealing as it is mystifying, like a comic book come to stoned life.

Whether you’ll buy into any of this depends on how much the visual flourishes make up for the lack of narrative coherency for you, and how much patience you’re willing to grant this show based on its creative pedigree. In that way, American Gods is this year’s Preacher.  If you liked Hannibal and don’t mind something with a similar visual aesthetic but looser story structure and less-compelling central characters then you’ll likely stick with this well beyond the pilot. Plus, if you’ve read the book then, well, you’re the target audience because Fuller and his co-writer/co-executive producer Michael Green show no interest whatsoever in making this series palatable to anyone unfamiliar with the source material. Either way, one thing is abundantly clear: American Gods is going to be gorgeous to look at. Once it gets wherever it’s going it might be amazing.

What about you? Have you read the novel? What did you think of the pilot? Let me know in the comments.