Overboard, director Gary Marshall’s 1987 snobs and slobs rom-com, is one of those movies everyone of a certain age seems to have seen and loved. When the We Hate Movies podcast guys, all of whom are roughly the same age as me, recently announced their intentions to make Overboard the next film they’d watch and mock they were inundated with emails and comments from listeners who objected to the idea of lambasting such a beloved, um, I guess you could say classic. After listening to their episode, I set about re-watching Overboard myself for the first time in decades. Surely these random dudes in New York and all of their mean jokes are wrong. Overboard is just as good now as it was in ’87, and that’s all there is to it.

Yeaaaaahhhhhhh….it’s not. This movie is problematic, to say the least.

I get it. I get why we all seem to look back on this movie through rose-colored glasses. Kurt Russell and Goldie Hawn, Overboard‘s kidnapper and kidnappee, are adorable together. That was true back in 1987, and it’s equally true in 2017. In fact, just last year Russell, who first started dating Hawn after they worked together on 1984’s Swing Shift, confirmed the famously unmarried pair had recently snuggled and even got a little frisky together while re-watching Overboard. Clearly, Godie and Kurt=relationship goals.

So, let’s just stop all this nonsense of whether or not Overboard is as good as we remember it being or if the plot of a blue-collar single father kidnapping a bitchy amnesiac socialite and convincing her she’s his wife and mother of his four kids is entirely kosher. It’s not kosher at all! But who cares? It was the 80s! They didn’t know any better back then. Can’t we simply appreciate that this film captured Russell and Hawn’s love in its relative infancy and still brings them warm memories to this very day?

Sure. We can appreciate that. It doesn’t make Overboard any better, though. In this movie, a man essentially kidnaps a mentally compromised woman (the hospital releases her into his care because he happens to know about a birthmark on her buttocks), tricks her into working as his housewife/slave and eventually has (admittedly consensual) sex with her. Then we’re expected to applaud at the end when he not only totally gets away with it but gains access to her massive fortune?

That’s the knee-jerk 2017 way of looking at it, though. Were similar complaints raised in 1987? Not by Roger Ebert, who regarded it as a fine film in the predictable, but enjoyable tradition of the screwball comedies of the 1930s. Nor Gene Siskel, who detested the film but only because it didn’t make him laugh, leading him to conclude, “The movie Overboard is much too top heavy with bad jokes and screaming, and not strong enough in its love story. I don’t know why they didn’t emphasize that. The story is simply a The Taming of the Shrew tale, and neither the shrew nor the tamer is that interesting.”

That’s how two prominent dudes felt at the time. The one who didn’t like the film actually wanted more of the love story. What about a woman? Janet Maslin, the lead film reviewer for The New York Times from 1977 to 1999, at least acknowledged the potential for criticism on moral grounds but argued the film ” is clever enough to let love bloom spontaneously between Dean and his Annie, thus avoiding charges of sexism or white slavery. Though it starts on a note of enjoyable hostility between the two of them, the film soon aims for lighthearted romance.”

The initial hostility, of course, is key to the plot. Those who grew up on repeats of Overboard on HBO tend to remember the basic kidnap plot of the film (and, oddly, the scene of Hawn standing up for the kids at school) but not the why. What exactly motivates Kurt Russell’s Dean to con Hawn’s Joanna, whom he renames Annie while remaking her identity?

Oh, it’s simple: revenge. She hires him to build an extension for her closet, and then not only refuses to pay when he uses a type of wood she deems unsuitable but also throws him and his tools overboard:

Indeed, this is the half of the film which places the least amount of strain on your conscience. It’s quite simply a live-action cartoon with Hawn hilariously vamping it up as the “rich bitch,” unleashing such eminently quotable lines as: 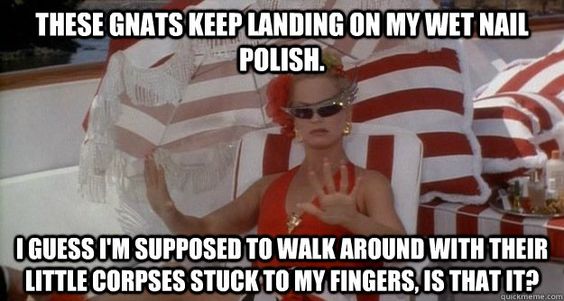 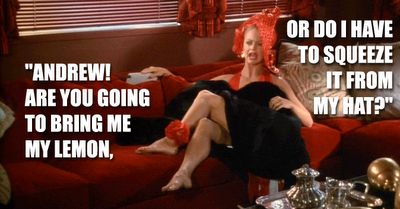 Thus, when the amnesia plot kicks in and Joanna’s own husband, played by Gilmore Girls‘ Edward Hermann, temporarily refuses to claim her you’re supposed to buy into the idea that she deserves what’s coming to her. As TheStudioExec.com argued in its retro-review from two years ago:

You see Overboard isn’t about the battle of the sexes, it’s about class. Goldie Hawn’s character might have been abducted and brainwashed but she deserved it, she’s rich, obnoxious and entitled. She lives in an elite bubble surrounded by people of her own kind. She’s unhappy, but she doesn’t know anything else, she’s never lived in the ‘real’ world and the dubious scheme concocted by Russell’s sweaty carpenter gives her the opportunity to escape from her gilded cage.

We know she’s unhappy because we glimpse her telling her mother as much while discussing how much she wants to have a child, and her ordeal with Dean not only grants her a glimpse at domestic bliss but also a taste of motherhood. Her nights as Joanna were spent in bed on a yacht with her emotionally distant husband as he watched Lifestyles of the Rich and Famous; her nights as Annie are spent teaching her youngest son to read or going out dancing with her husband and friends. It’s not hard to see why she ultimately finds one to be more rewarding than the other and chooses to return to Dean and the kids in the end after her memory inevitably returns and temporarily causes her to retreat back to her life as Joanna.

How does that really make it okay for Dean to have taken advantage of her? On top of that, Dean seriously hasn’t thought any of it through. He figures he can just turn her back in after she’s worked off the money she owes because that’s how these things work. Nor does he seem to realize he’s turned all of his friends, most notably business partner/bowling buddy Billy (Michael Hagerty), into accessories.

That might make for good fodder for a jokey podcast, but does it really make Overboard a bad movie? It is, after all, a clear ode to class-warfare screwball comedies, not some secret white slavery manifesto concocted by Marshall and screenwriter Leslie Dixon (Loverboy, Mrs. Doubtfire, Pay It Forward). Dean’s actions are meant to be acceptable because Joanna truly was that nasty to him, and he eventually shows contrition and attempts to come clean, even though she doesn’t believe him.

But did you not see the part about how great Kurt Russell and Goldie Hawn are together onscreen? Or the adorable Marry Poppins-esque effect Hawn has on the four boys once she adjusts to the situation? Maybe spend more time criticizing the running time since there’s no way this movie needs to be 112 minutes long, but do remember to enjoy peak-Russell and Hawn, amiably working through a somewhat dubious plot which raises more eyebrows with each passing year yet continues to burn brightly in the hearts of many 80s kids, just as long as they refrain from ever re-watching it.

NOSTALGIA BUSTER CONCLUSION-DOES OVERBOARD HOLD UP? – Only to a certain extent. The things you remember liking about the movie are still as strong today as ever, but the central premise is so detestable it shades the entire morality of the film in such ugly colors that you might regret having ever revisited this “white slavery sure is funny” comedy.

What about you? What do you think of Overboard? Let me know in the comments.