Doctor Who’s now-concluded three-parter confirmed what we might already have guessed: Steven Moffat is going out swinging. This is his final ride as Doctor Who head honcho, and after putting in the requisite work to establish the new companion Bill and the mini-mystery of why the Doctor has set roots down at a university he plunged into this trilogy with a clear goal to comment on current anxieties over a pending World War III, the rise of right-wing nationalism in the Western world and the spread of fake news. His solution was to put all of those anxieties in a Doctor Who context via the introduction of a new villain with a truly ingenious plan for world domination, and then ask whether or not we still deserve to be saved by The Doctor. It’s the most explicitly political storytelling in Doctor Who since John Nathan-Turner used a dystopian society to take on Thatcherism during the Sylvester McCoy-era classic “The Happiness Patrol.”

Yeah, but was it actually any good? Was it just political polemic? Did its metaphors even make sense?

“Lie of the Land,” the concluding hour of the trilogy, was the most politically charged installment yet, and while it was often breathtaking to behold it also seemed to simply run out of time, featuring an ending that was nearly as abrupt as Poochy being written out of Itchy & Scratchy via a line of nonsense dialogue and amateurish animation yanking him off the screen.

–The re-written history. It was chilling, yet also morbidly hilarious to see The Monks photoshopped into famous moments in history, decayed, corpse-like faces looming large in the background of the world.  That this sequence was narrated by The Doctor at his most re-assuring instantly set the tone for the dystopia, something we’ve seen on Who before but rarely if ever in such a way that The Doctor appears to be in cahoots with the baddies (or at least working as their slave). The central metaphor of The Monks=Fake News didn’t necessarily work as well throughout the entire episode, but for this opening it was brilliant.

–The performances when it seemed as if The Doctor might have turned on humanity. For those given to pessimism about current events, here was an episode in which The Doctor seemed, however briefly, to agree with you, telling Bill, “Yes, you’ve got free will, but look what you’ve done with it. History was saying to you, “Look, I’ve got some examples of fascism here for you to look at. No? Fundamentalism. No? Okay. You carry on. I had to stop you or at least not stand in the way of someone else who wanted to because the guns were getting bigger and it was going to be goodnight, Vienna.”

In the Doctor’s argument, The Monks almost didn’t matter, just another fascist regime given power by humanity. Instead, humanity’s the true enemy, bound to self-destruct due to an ongoing inability to learn a damn thing from history. This was a scarily effective scene because of how hard Capaldi sold his apparent betrayal and how palpable Bill’s heartbreak felt, and, frankly, The Doctor made a fairly convincing argument.

This was like a comic book/action movie where the villain gets a moment at the start of the third act to rationally appeal to the hero, illustrating that they actually have a point, albeit one which proves to be directly in opposition to the hero’s moral code. The difference here is that The Doctor got to both be the villain and the hero, advocating for giving up on humanity once and for all and poo-pooing the overblown concept of free will in one breath before re-asserting his inability to ever give up on us and strong belief in free will in the next. I had some issues with how this scene was resolved, but the lead-up to that moment was Doctor Who at its surprising best, challenging what we believe about The Doctor and pushing Bill to her breaking point, ala The Doctor and Ace in the McCoy era.

–The production flourishes providing the occasional glimpse at The Monk’s subliminal messaging. “Trust” and a picture of one of the Monks often flashed in blink-and-you’ll-miss-it fashion whenever any of the characters dared to resist, and it was done in such a way that it almost seemed like The Monks had taken over the episode, hijacking the airwaves to Tyler Durden their way into the frame.

–Nardole knows kung fu. Kind of. Each new installment in the trilogy revealed yet another impressive talent for Nardole, part of the season-long effort to initially present Nardole as bumbling comic relief before gradually revealing just how knowledgeable and, at times, physically capable he actually is.  So, it was perfectly in keeping with his character that he would know his own version of the Vulcan death grip, but not be able to do it with his other hand since he’s had a hand transplant, muttering on before a stern look from The Doctor causes him to trail off.

–Missy. I loved the acknowledgment that The Master/Missy has other adventures unrelated to The Doctor. Feels like that has almost never come up before in Doctor Who history. Additionally, kudos to the closing scene with Missy tearing up over remembrances of her victims. Either she’s going through a Faith-in-Angel long night of the soul or she’s pulling a seriously long con. I can’t tell which one it is, but Michelle Gomez is playing the hell out of it either way.

-The parting, hopeful message. My reading of this entire trilogy is it was born out of Moffat stepping back from the state of the world and asking himself if The Doctor was real would we still deserve to be rescued by him, ultimately settling on a hopeful answer with Doctor telling Bill, “In amongst 7 billion is someone like you. That’s why I put up with the rest of them.” It’s the capacity for good in the individual person which can still give us hope, or so the message seems to be. 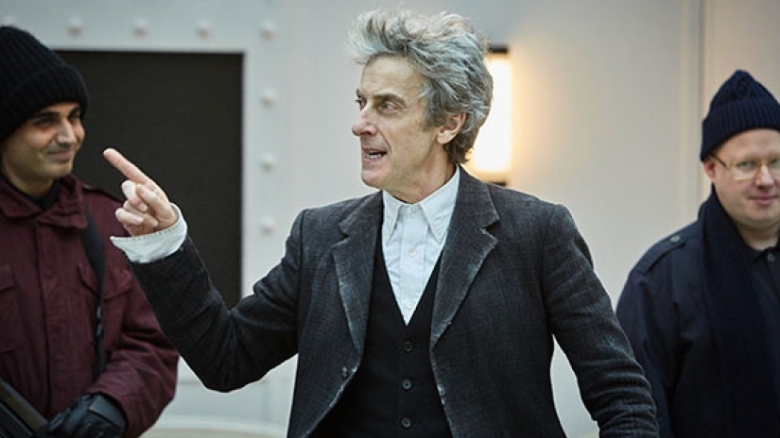 –The ending. The idea, as I understand it, is Bill’s memories of her mother are so pure and buried deep inside of her that they were incapable of being corrupted by The Monks, and subliminally transmitting the image of the mother to the rest of the world counters The Monk’s psychological hold because it’s actually fighting love (her love for her mother) with love (her love for The Doctor, which the Monks have weaponized by turning Bill into an unwitting battery supercharging their psychological grip on the world). I think. Honestly, the last 10 minutes of this episodes are such a blur of rushed explanations and abrupt exits that I couldn’t believe my eyes. They had two full prior episodes and all of “Lie of the Land” to build up to a big finale, yet then they ended up having to rush through it like an indie movie which has suddenly run out of money.

–The fake regeneration. From a practical standpoint, can the Doctor actually do that? Can he force his body to begin a regeneration process for no reason and then simply stop? If that wasn’t what was actually happening there, then how exactly was he mimicking the appearance of a regeneration?

Those are some of the nerdy, inside-Doctor Who questions which the sequence raised, but what purpose did it serve from a storytelling standpoint other than producing an admittedly solid surprise? Could Bill’s deprogramming only be completed if she genuinely thought she’d killed The Doctor? I’m not entirely clear if any part of that ruse was actually necessary because Bill already seemed plenty deprogrammed to me. Perhaps, though, I was simply annoyed that a moment which had been hotly debated due to its inclusion in the season trailer turned out to be a parlor trick The Doctor plays on Bill as a test. At least this much is clear: Bill knows what the regeneration process looks like now. That might factor in later should she still be around when this Doctor finally regenerates, be it sometime this season or in the Christmas special.

What about you? What did you think of “Lie of the Land”? Let me know in the comments.