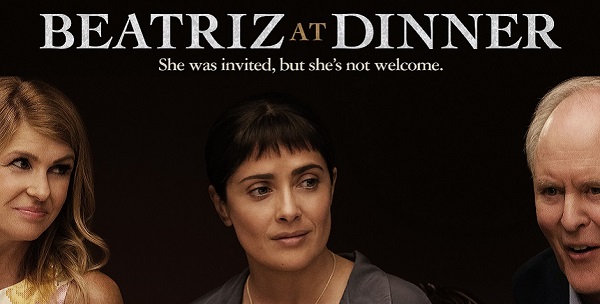 Beatriz at Dinner, director Miguel Arteta and screenwriter Mike White’s study of what happens when the 99% meets the 1%, is instantly familiar to anyone who’s watched a lot of indie film over the past couple of years. There’s a character we briefly glimpse going about her everyday life (Selma Hayek’s Beatriz, who works as a holistic healer for cancer patients as well as a masseuse). Next thing we know she’s at a massive house with several other characters where she and they shall stay for the remainder of the film, casually talking to one another and arriving at several dramatic turns in their ongoing conversation.

It’s a one house wonder! The indie film world has been flooded with these ever since the middle fell out of the film industry and micro-budgets became the in-thing in the film financing world thanks to Jason Blumhouse. All you need is a home to rent, a group of actors willing to work for next to nothing and a story idea. This has resulted in sex comedies (e.g., The Overnight), rom-coms (e.g., Digging for Fire), inventive sci-fi (e.g., The One I Love, ARQ), a Shakespeare adaptation (Joss Whedon’s Much Ado About Nothing) and too many horror movies to count…although you should really watch Hush if you haven’t yet. This is what Mark Duplass once dubbed “the available materials school of filmmaking.” The best of these maxmize their space and tell a story which overcomes the limitations of the space; the worst feel like filmed plays.

Beatriz is different, though. Beatriz is political. It might as well be called My Dinner with Donald (get on making that an official My Dinner with Andre sequel, Wallace Shawn!), dropping Beatriz into a dinner party with a Donald Trump-like figure who instantly mistakes her for hired help and later grills her over the details of her immigration from Mexico as a child and whether or not she’s even a U.S. citizen.

And this might be a harbinger of things to come in the indie film world over the next couple of years. According to the Spring 2017 issue of Filmmaker, every indie filmmaker currently seeking funding might need to stop and honestly assess if their project has a strong message about what’s going on in the world now. If not, maybe think about a rewrite because film financiers looking to invest in the indie sector are newly emboldened to back projects which might contribute to the #Resistance against the Trump administration.

This is based on a series of interviews Filmmaker conducted with indie film financiers and producers, including Jamie Patricof (Captain Fantastic), Eddie Linker (Win It All) and T. Sahara Meer (Nancy). Opinions varied on whether or not Trump’s uncertain impact on the stock market, trade and international relations will choke off funding resources for indie film or leave them relatively unchanged, but the consensus is that films with a political, social or economic message will have an easier time finding funding than those which have nothing to say. As Patricof put it:

We’re now at a place where I’m actively looking for projects that have some direct or indirect social or economic or political point of view. If I’m going to make a movie, it’s got to move the conversation forward.

Beatriz, having completed production last August, predates this, but it likely contributed to Beatriz attaining distribution at Sundance in January, which overlapped with Trump’s first week in office. It now joins Get Out, It Comes at Night and The Dinner as post-Trump films attempting to address the divisions between us.

-And in the time since I started writing this The Hollywood Reporter published an op-ed from Jay-Z, who has produced seperate documentaries about the tragic deaths of Trayvon Martin and Kalief Browder, pushing for more projects which demand social justice.

Perhaps none of this sounds interesting to you because enough already with Trump. Outrage fatigue is a real thing, people. Perhaps it simply confirms your suspicion about Hollywood’s liberal bias, and you just want to flip this movie off and yell Make America Great Again. Or perhaps all you really want to know, dammit, is Beatriz at Dinner any good?

To those in the latter category: Yes, Beatriz is good. The script is partially inspired by Mike White’s privileged childhood experiences of watching his parents (his father was a ghost writer for far right figures like Jerry Falwell) host dinner parties where the most offensive things would end up being said in the most casual, pleasant way possible, and that is Beatriz’s secret weapon. This is not a working class immigrant stumbling into an Illuminati meeting; she simply finds herself at a table with a group of rich people whose defenses are down and pronouncements of their Ayn Rand-infused worldviews more casual and thus even more upsetting. 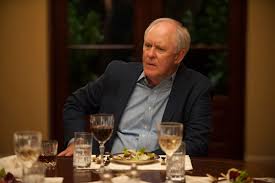 The plot: Beatriz rushes out to deliver a massage to her oldest client (Connie Britton, perfectly toeing the line between sincere/caring and willfully oblivious) in the hours before a small dinner party being thrown by her husband, but after the massage her car won’t start. So, her client extends a sympathy invite to the dinner party, making her the proverbial third wheel at a casual meeting of three rich white dudes (John Lithgow, Jay Duplass, David Warshofsky) and their trophy wives (Amy Landecker, Chloe Sevigny, Britton) celebrating a shady-sounding real estate deal. They are all outwardly polite toward Beatriz, but also react as if they don’t fully understand why someone who looks (at least to them) like she should be serving them food is now sitting at the table and eating with them.

Eventually, Hayek and Lithgow (as as Trump-stand-in Doug Strutt) lock horns and engage in an ongoing debate of altruism versus objectivism, although never in those exact terms. It’s more that as they engage in idle chit chat they realize just how opposite they are in their respective approaches to life, and because she’s had a tough day and too many glasses of wine she can’t stop herself from confronting him, which he initially indulges because he seems to find it amusing, not recognizing that she views him as being emblematic of everything that’s wrong in the world. As Arteta told LandmarkTheatres:

We gave these two characters the same strength of conviction and made the best arguments we could find to justify their beliefs. Our intention is to see that even though we all feel we have good reasons for doing what we do, missing each other and not understanding that we’re in the same boat is the constant tragedy of our lives.

Hayek and Lithgow prove up to the task, each delivering stellar performances, with special kudos to Lithgow for not simply doing a Trump impression. He’s Trump-like in worldview, but not necessarily in behavior or verbal dexterity. He comes off as charming, only dropping the veil of congeniality when discussing matters of business at which point he turns into a single-minded task master.

It becomes clear that to Hayek’s Beatriz this night will change her life forever but to Lithgow’s Doug it will simply be a night which produces stories for him to tell at parties, regaling acolytes with the details of that one night a Mexican woman got really mad at him for, among other things, bragging about killing a rhino in Africa. His life will go on as it always has, amassing more and more wealth, breaking more and more rules and getting away with it and contently looking up at the sky while contemplating his next African hunting trip or ruthless real estate move. She, however, will look back on this as the night she realized, to borrow the title of another stellar 2017 indie, she no longer feels at home in this world anymore.

Arteta aimed for more nuance than that, telling Landmark:

“I believe that all of us, whether we are immigrants or not, have a yearning—something that is missing in our lives—that compels us to remember a time when things were simpler and better. It’s like wishing for an impossible time that can never come back. Beatriz at Dinner’s main theme for me as its director is that that yearning unites us all more than any differences we have.”

On that point, Beatriz can be considered a failure. It tries to draw a connection between Beatriz’s yearning to see her dead grandmother again and return to the purity of her youth in Mexico and Doug’s yearning for a simpler time devoid of liberal hand-wringing and government regulations to free him to do whatever the hell he wants. It’s a connection, though, that doesn’t work at all, meaning you only really end up coming down on Beatriz’s side or at least get the sense that the film wants you to feel that way. Because I went in already inclined to side with her over the Trump stand-in I found it to be fascinating, but to others Beatriz might just seem rude for never shutting up the whole dinner party.

It’s really like an incredibly well-acted play with an obvious liberal bias, and while the film does work to give one of its’ white characters (Britton) some shading it’s mostly the “rich white dudes suck” movie you’re expecting it to be.

And in the age of Trump we might be seeing a lot more of those.