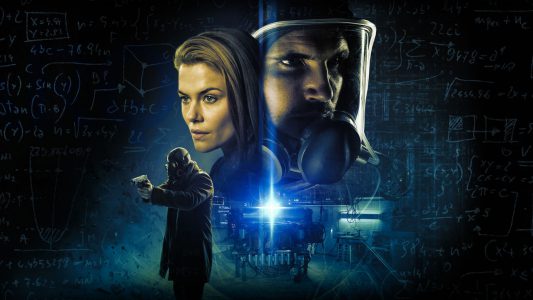 A guy (Robbie Amell) suddenly awakes in his bed, fully dressed and on top of the covers. He quickly checks the clock on his nightstand before rolling over to admire the beauty of the girl (Rachael Taylor) sleeping next to him. Before he has a chance to wake her up, three masked men break down his bedroom door and knock him out. The next thing the man knows he’s in his own work room, tied to a chair back-to-back with his girlfriend. The masked assailants want something he’s not willing to give, and he only has 5 minutes to change his mind. However, the man will not be intimidated, and quickly hatches a plan to take out his would-be attackers. It backfires, and he dies. 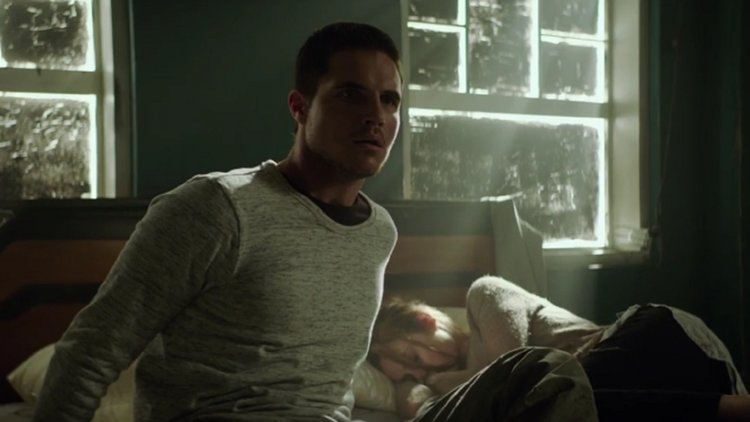 Then he wakes right back up in that same bed at the same exact time of the morning, with mere moments to spare before the assailants storm his room and the whole thing happens again.

That’s probably not the type of quote Netflix is looking for in reviews of ARQ, the streaming giant’s latest original movie. However, largely due to overuse on various TV shows we are now so familiar with the time loop storytelling trope that you can’t simply just pull a Groundhog Day anymore and call it good. If you want to do a time loop story you have to do something new with it, and while ARQ gets points for its immediacy, i.e., dropping us straight into the story, that’s not enough to set it apart from its various cinematic predecessors. Also, thanks to  Source Code and Edge of Tomorrow they’re not the first to take a strictly sci-fi (the loop is happening because of a time displacement machine the main character creator) instead of fantasy (as in Groundhog Day or About Time ) approach to the genre.

But then that first twist happens, and, holy shit, there might be more to ARQ after all.

Obviously, I can’t tell you what the twist is. That would be spoiling. Plus, ARQ actually has multiple plot twists, all of which challenge the central character’s assumptions about his situation and continually elevate the tension while also heightening the interpersonal conflict. Writer-director Tony Elliott, making his feature film debut after writing for TV (Orphan Black, Hunters), claims to have written his script several years before either Edge of Tomorrow or Source Code came out, and films like Children of Men and Red Road were just as influential on him as Groundhog Day or Primer. However, ARQ still feels like a well-studied film attempting to honor genre conventions while also tweaking them, employing the time loop device in service to a character drama with sci-fi trappings.

Elliott would prefer we think of it as a story about hope which just happens to feature a time loop, a two-hander about a reunited girl and guy with baggage to work through and differing world views but also unmistakable mutual affection and attraction. As Elliott told Filmmaker Magazine:

ARQ is a personal story about hope. The times we’re in now seem particularly precarious politically, environmentally and socially. Some days the world feels frenetic and spiralling out of control. And while we’re in unprecedented territory, history repeats. From the political to the personal we keep making the same choices — and the same mistakes — over and over again. We’re only human. Like the lead character Renton, I know what it’s like to be trapped in a cycle of self-destructive behavior. And like the co-lead, Hannah, I know what it’s like to strive to be better. And like them both I know what it’s like to keep trying — yet keep failing. I’m only human. ARQ is a story about fighting for what matters, no matter the odds or the obstacles. It’s about believing that we can change, if we keep trying. That we will change for the better, as long as we never give up. I believe that for myself as I do for humanity. ARQ is hopeful.

Whether or not Elliott completely succeeded in completing that storytelling goal is up for debate. Renton’s transition from pragmatist to optimist does seem a tad artificial. However, Elliott definitely stuck to his guns, going out on a final moment which might confound some viewers looking for more closure but ultimately continues the film’s message of hope, namely that even when things seem to be at their worst there’s always the possibility that they could get better.

ARQ is a surprisingly clever time loop movie, exactly the type of small film you’d expect from an ambitious first-time director looking to make his or her mark by tackling a familiar genre and adding something new to it. As such, you don’t necessarily walk away from ARQ looking forward to maybe rewatching it some day; you walk away looking forward to seeing what the film’s writer-director, Tony Elliott, does next. He had 19 days and $2 million to film ARQ. Let’s see what he can do with more time and money.