Last week, Vulture’s Emily Yoshida memorably admitted, “I think I saw The Hitman’s Bodyguard, but I can’t be sure.”

And that about covers it. This Ryan Reynolds-Samuel L. Jackson buddy comedy in which the former plays the Felix to the latter’s Oscar (except, ya know, with guns) isn’t the kind of movie that sticks with you. It inspires neither a passionate nor a critical response, really. It’s just something you see, moderately enjoy and promptly forget about. In that way, it’s not dissimilar to various buddy comedies of the past. Like, I know I saw Bulletproof in the late 90s, but I couldn’t tell you anything about it now. Is that the one with Adam Sandler? I’m pretty sure it is. Ah, who cares. It doesn’t matter.

Similarly, the plot of The Hitman’s Bodyguard doesn’t really matter, but I’ll explain it to you anyway because that’s what were supposed to do in movie reviews:

Reynolds plays Michael Bryce, a world-renowned bodyguard laid low by an epic fail at some point in the recent past. Jackson plays Darius Kincaid (a made-up movie name if I’ve ever heard one), an assassin with a heart of gold about to turn’s state evidence against a Belarus dictator (Gary Oldman at his Gary Oldmaniest). When Kincaid’s prisoner transfer inevitably goes wrong Bryce’s ex (Elodie Young) suspects her Interpol unit has a mole and can’t be trusted. So, she twists Bryce’s arm into covertly escorting Kincaid the rest of the way, and….wait for it….hilarity….you know it’s coming….ensues! 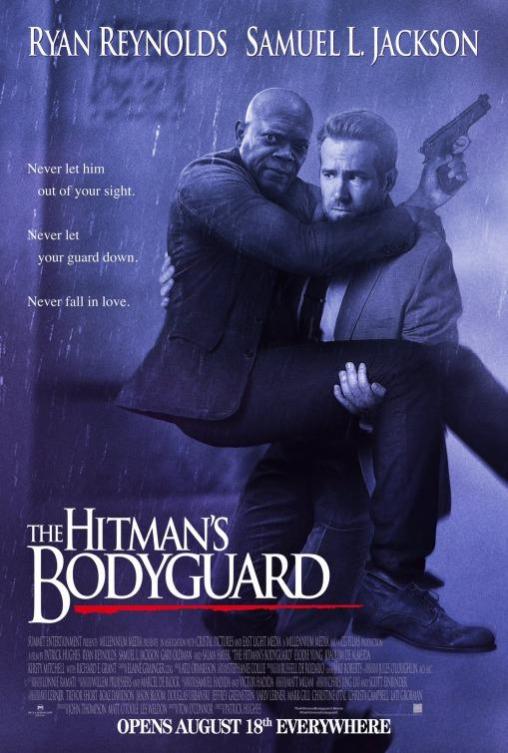 The whole thing plays like an updated Midnight Run with broader jokes, rougher language and more extreme action, often invoking John Wick in that last category. When the warring personalities at the heart of the film reach a point where they start singing annoying songs at each other in the car to make up for the lack of a radio you remind yourself that these kinds of movies used to be as plentiful as comic book movies are now.

However, while that tired on-screen dynamic eventually ran its course and wore out its welcome its absence can do funny things to the heart. It can make you nostalgic for the days of simple action movies where you watch a perfectly matched central pair bounce off of each other, laughing their way through a tepid mystery and mindless action scenes before sending us out with a smirk and thinking, “Those crazy guys. They really learned a lot from each other.”

And that’s certainly what The Hitman’s Bodyguard is going for. It scores definite points for cast chemistry since Reynolds and Jackson are never not-watchable together. (Plus, Selma Hayek’s steals scenes as Kincaid’s foul-mouthed, unlawfully incarcerated wife). It also pleases the action movie gods by staging some inventive sequences. There’s a running gun battle in Coventry, England, continuous fight scene through a kitchen and into a hardware store as well as a speedboat chase along the canals of Amsterdam, with Jackson in the boat in the water and Reynolds trailing in a motorcycle up above, darting from one side to another to take out Jackson’s various pursuers.

However, the inevitable bickering feels manufactured. Jackson’s consistently bemused reactions and constant laughing at decidedly unfunny moments, such as when they lose all of their weapons as well as their last mode of transportation in one fell swoop, rings false. Same goes for the notion that Reynolds’ character is some kind of control freak who just needs to learn how to let go. Jackson getting a Dexter-like moral code (and tragic backstory) feels a little too focus-grouped. And I don’t even know what to do with the weird digital haze which covers many of the outdoor scenes, giving off the impression that some digital trickery was utilized to maintain the illusion all of these scenes really were shot on location (and not at some place doubling for some other place).

But for all of its buddy comedy cliches and odd beats Hitman’s Bodyguard has a definite Deadpool side to it, one where you can see Ryan Reynolds’ handywork as a screenwriter since he admits to having taken a pass on the script 10 weeks before shooting to up the humor. As such, Hitman sneaks in the occasional clever upending of genre conventions, such as an ex-boyfriend getting his comeuppance when he melodramatically accepts an apology his ex-girlfriend never actually offered. There’s also an element here that is pure cartoon, such as ultra-exaggerated “how I met my girl” flashbacks for Reynolds and Jackson which feel cribbed straight from Deadpool’s romance montage. When Reynolds, at one point, vents his frustration and complains that Jackson has single-handedly ruined the word “motherfucker” you feel the nod and wink to the camera, even if it doesn’t literally happen.

It’s in those moments that Hitman’s Bodyguard feels like something worth remembering, but there aren’t enough of them. Instead, what you have is a perfectly watchable buddy comedy which you’ll probably forget as soon as it’s over.

The bar for the modern buddy comedy was set pretty high last year by The Nice Guys, and if you want to lovingly mock the genre you can’t go wrong with The Other Guys. The Hitman’s Bodyguard has positive elements from both of those, but it doesn’t know how to add them up to make a consistent and truly memorable movie. Luckily, there’s enough Ryan Reynolds cleverness here and likable chemistry between Reynolds and Jackson to make Hitman something you might not mind watching if you’re already a fan of either actor or buddy comedy movies in general. But it feels like the definition of a passably entertaining comedy to fill up theaters during the dog days of August.