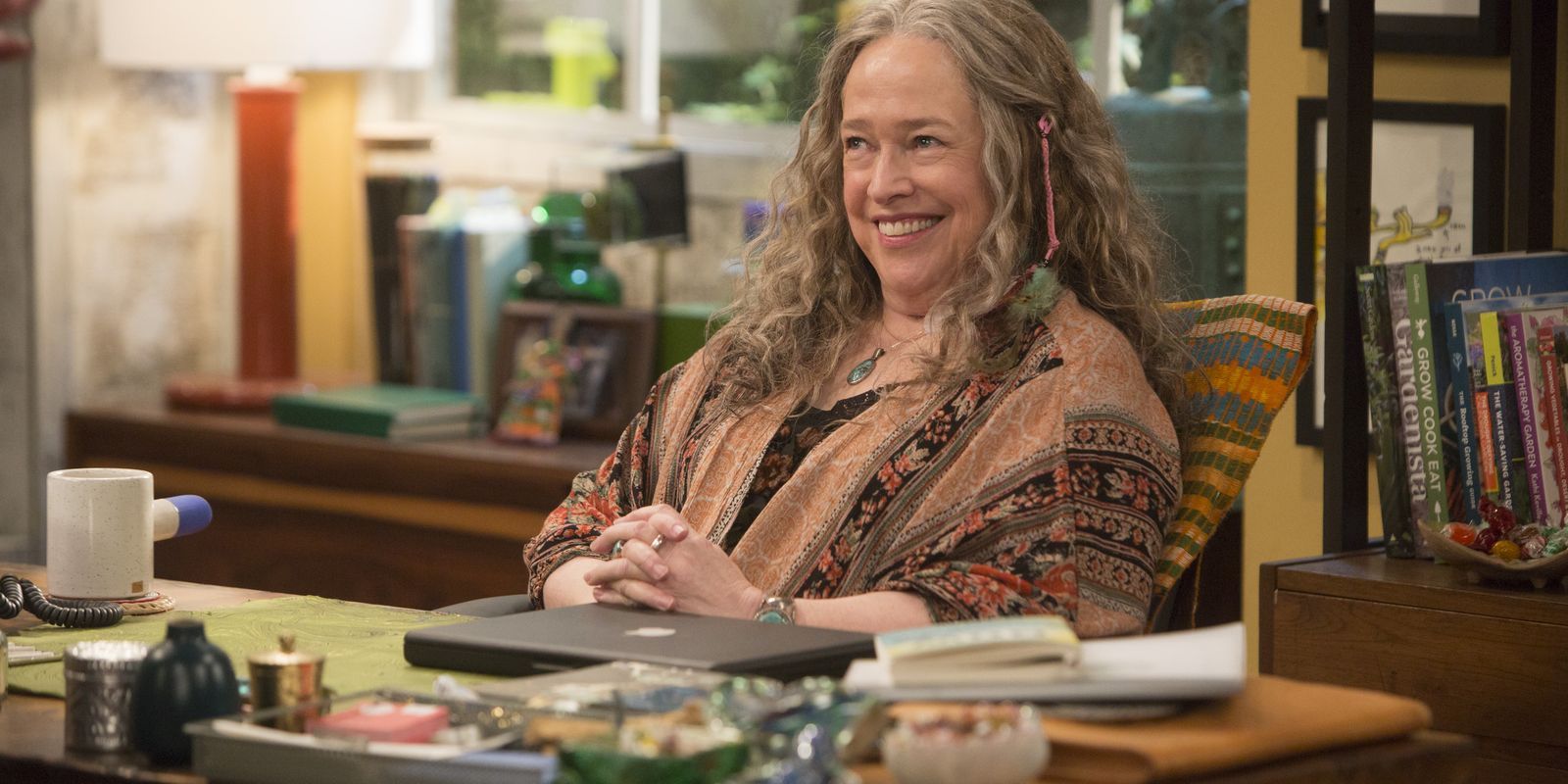 Disjointed, Netflix’s latest attempt at a progressive version of a multi-camera, laugh track sitcom, is the brainchild of longtime network TV veteran Chuck Lorre (Grace Under Fire, Dharma & Greg, Two and a Half Men, Big Bang Theory, Mom) and former Emmy Award-winning Daily Show writer David Javerbaum. The strange marriage of such seemingly incompatible work experiences adds up to one of the more intriguing sitcoms I’ve seen in a long time. I only intended to watch the first couple of episodes this weekend. Instead, I binged the entire 10-episode season (an additional 10 episodes are in the can and ready to go whenever Netflix chooses to drop them), sucked in by the increasing boldness of something that started out so poorly. In fact, if you watched the pilot and gave up I don’t blame you. I almost did too, but I’m a bit of a comedy snob when it comes to laugh track sitcoms these days. Luckily, Disjointed eventually proved me wrong.

The premise of the series is fairly sound. Kathy Bates plays Ruth Whitefeather Feldman, a longtime advocate for the legalization of marijuana who runs a dispensary in Los Angeles. She’s a lawyer as well as a self-proclaimed shaman and healer who refers to her customers as “patients.” Her mixed race son (Aaron Moten) is newly returned from college with an MBA and big plans for her dispensary, arguing that there’s no reason her store couldn’t be built up to become the Wal-Mart of marijuana shops. Thus, the core of the story is a cultural and generational clash. Ruth finally has what she spent decades fighting for, but all she wants to do with it is to simply help people and get high. Her son is more Alex P. Keating-like in his ambitions, rightly reasoning that with legalized marijuana turning into a real gold rush it’s incumbent on them to do everything they can to cash in on the opportunity.

This is spelled out for us in the opening minutes of the pilot as Ruth speaks directly into the camera and introduces us to her store and its quirky (and, as we later learn, rather damaged) employees, the conceit being that her son has ordered them to film this for a YouTube commercial. It’s an economical device, but it’s packed with one DOA joke after another, as is the rest of the pilot. The marijuana puns come fast and furious (e.g., Elizabeth Ho’s Jenny refers to herself as “the toking Asian”). The studio audience laughs too hard at one predictable punchline after another. And you start to feel bad for Bates being stuck in something so unabashedly old-fashioned in its ideas about joke construction and delivery.

Then at the 11-minute mark Ruth says the word “fucking” in a scene-ending joke.

That’s cool, I guess, but thanks to Netflix’s The Ranch we already know you can cuss on a multi-camera sitcom if you want.

Yeah, but then a fake commercial narrated by a Sam Elliott soundalike apes the cinematic DNA of a beer commercial (so many cowboys standing around looking man-ly…) to try and sell us on an American Made, Rocky Mountain-grown brand of weed.

That’s kind of funny, but…

Then Carter, the surly Iraq war veteran security guard played by Tone Bell, looks into the camera which then zooms straight into his head as part of a jazz-scored, spoken-word-poem-narrated animated sequence peeking inside his PTSD-addled mind.

WTF? What the hell is this show? 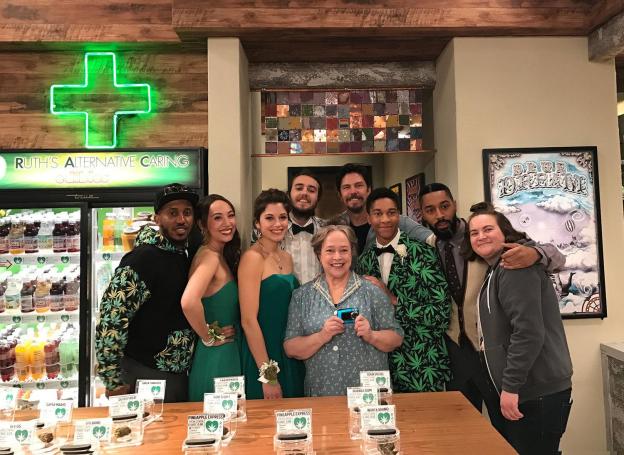 Indeed, as Lorre told KCRW’s The Business Javerbaum’s big idea was to use Disjointed to “deconstruct” the traditional sitcom. In execution, though, there’s less full-blown deconstruction and more simple experimentation. All of the episodes feature fake commercials, some benign, others laugh out loud hilarious in their satirical slant on advertising. There are at least three fantasy musical sequences interspersed throughout the season, and Carter’s PTSD is continually communicated to us through inventive animation. The opening theme song’s lyrics are re-written for one episode (and one episode only) to jokingly comment on something that just happened. And the finale takes a sudden turn for the grimly serious as the laugh track eventually falls away and we are treated, in the form of a killer Kathy Bates monologue, to a bitter rebuke of America’s hopelessly wrongheaded war on drugs.

It’s enough to keep you watching, but it’s not enough to make you laugh. Because for all of Disjointed’s jarring and often brilliant experimentation the majority of the show is still dependent on tired sitcom shenanigans and punchlines, capably delivered but not always inspiringly written (the ones that include curse words seem to a higher success rate). Of course there are two will-they, won’t-they couples, one which the show attempts to deconstruct but can’t completely get away from and another which comes on very late. Lorre’s Two and a Half Men predilection for crude sex jokes occasionaly rears its lazy head. Side characters like a villainous Taekwondo instructor, a desperate housewife and two stoner YouTubers are played to cartoonish extremes, no more well rounded or thought out than your average Disney Channel sitcom character.

To be fair, any joke is made better by Kathy Bates, and there’s a fair deal of enjoyable weirdness on display, such as a running gag about Pete, the store’s sweet-natured pot grower, occasionally and mysteriously slipping into an Australian accent (mostly because the actor playing him, Dougie Baldwin, is actually Australian).

Disjointed also quickly develops a Mom-like propensity for tempering its humor with dramatic reflection, such as when the death of an old colleague forces Ruth to ponder what her legacy will be or when Carter finally opens up about his PTSD and has to lean on everyone for advice as to whether or not using pot will actually help him. That last plot line, in particular, might be Disjointed’s greatest achievement because although the season makes all the obvious pot jokes you’d expect it also found the time to devote an entire episode to a surprisingly nuanced discussion of the potentially contentious subject of marijuana usage among war veterans. One by one, Ruth’s employees offer Carter their advice, and not everyone is necessarily eager to push marijuana on him. Instead, it needs to be his choice. He’s free to do what works best for him.

And that’s where I leave you. Should you watch Disjointed? Do what’s best for you. If you are someone who gets no satisfaction whatsoever from traditional laugh track sitcoms then this probably isn’t for you, even with its flights of fancy. However, if you are agreeable to a somewhat experimental twist on an old format and love Kathy Bates then please give Disjointed a chance (and don’t give up after the pilot.)