Huh. That doesn’t have the same ring to it, but it’s a more accurate title for Birth of the Dragon.

I knew I was in for trouble with this movie when the WWE Studios vanity card logo flashed at the beginning. You see that log, you think “direct-to-video” and B-Movie fodder like See No Evil, The Chaperone, Leprechaun: Origins and the Larry the Cable Guy vehicle Jingle All the Way 2 . To paraphrase South Park, the WWE almost taunts you, announcing, “We know you have a choice in movies to see, and it looks like you made the wrong one.”

Fine. Whatever. I went to Birth of the Dragon expecting a B-Movie in the vein of all those Bruce Lee kung fu flicks I grew up on, and a WWE logo shouldn’t change that. In fact, it only confirms it. I wasn’t expecting a masterpiece. I just wanted to see fake Bruce Lee and fake Wong Jack Man fight. That is, after all, the entire premise of the movie:

In 1965 San Francisco, years before Lee became a film star he was teaching kung fu out of a dojo, accepting students of any race or religion even though the old guard frowned upon teaching kung fu to westerners. The resulting controversy led to Lee and Wong Jack Man, a Shaolin monk and kung fu master newly arrived in the Bay Area, to stage a private fight to determine whether kung fu would remain shrouded in secrecy or shared with the world.

Or so the legend goes.

In reality, the reasons for the fight were more complicated, and since there very few eyewitnesses to the actual fight the details shift depending on you ask. Those sympathetic to Lee claim it was a short fight which resulted in a decisive victory for the future Enter the Dragon star whereas those sympathetic to Wong claim it was an extraordinarily long fight with a somewhat unclear resolution. 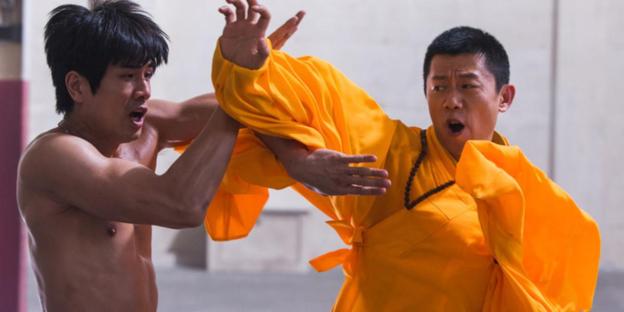 Dragon: The Bruce Lee Story, the 1993 biopic starring Jason Scott Lee, heavily – and I do mean heavily – dramatized the event. Their Wong Jack, for example, is called “Johnny Sun.” Birth of the Dragon takes a second go at it, heavily leaning toward sympathizing with Jack.

At least that’s what you think you’re getting from the movie. For the first 5 minutes or so you’re not disappointed.

We quickly meet Bruce (Philip Ng) and Jack (a truly fantastic Xia Yu) on their respective sides of the globe – Bruce in San Fran, Jack still back in China. There are also a couple of notable side characters at Bruce’s dojo: a goofy manchild named Vinny (Simon Yin) and his Indiana-born white friend Steve (Billy Magnussen) who is using Bruce’s kung fu lessons to work through his rage issues and augment the natural boxing skills he picked up while defending himself from his abusive father.

We watch as Jack somehow dishonors himself in a showcase match against the master of a neighboring Tai Chi temple and as Bruce charismatically teaches his students by day while making Hollywood screen tests by night. The former is a reflective and compelling figure, the latter astonishingly arrogant but physically impressive. It seems as if they will have much to learn from each other.

But then the damnedest thing keeps happening. The film always seems to cut away to Steve, sometimes hanging out at work with Vinny, other times making googly eyes at a hot waitress at a restaurant. You start counting in your head and realize roughly 5 full minutes have gone by without Bruce or Jack being on screen. Suddenly, it hits you: shit, Steve’s the main character, isn’t he?

Yep. This film about a legendary fight between two kung fu masters is secretly about some fictional white dude who ultimately acts as an intermediary (starting as Bruce’s student before switching to become Jack’s) and eventually asks both of them for help in freeing his new Chinese girlfriend from the Chinatown mob. It’s a plot which seems to have been born out of two goals:

1. Create a go-between character to help set-up the fight and act as a sounding board for both Bruce and Jack’s competing worldviews; 2. Create a pulpy side plot meant to evoke one of Bruce’s own movies (evil crime bosses galore), and then delight in the complete fantasy of watching Bruce and Jack kick ass together.

Which, sure. You’re adapting a historical event that has competing eyewitness accounts and featured two combatants who had next to zero one-on-one interactions outside of their fight, but you also just want to make an unabashed homage to old Bruce Lee movies with a WWE flair (thus Bruce refers to bad guys as “badasses”) while simultaneously elevating Wong Jack Man’s historical profile. Plus, you probably had someone in accounting arguing you’d never be able to sell this movie to western audiences without a white lead, ironic since the plot is so contingent upon the controversy over Bruce teaching white people.

So, that’s how you get Birth of the Dragon, a movie that wastes a stellar Xia Yu performance and Philip Ng’s exaggerated, if somewhat more accurate than we’d like to believe imitation of young Bruce Lee on a bullshit story about some white dude who learns the true meaning of kung fu is not to kick ass but to practice spiritual self-care only to then see that lesson completely contradicted by a butt-kicking finale. By the end, even my Bruce Lee-worshipping, Tai Chai-practicing Hawaiian stepfather turned to me and lamented, “Too cartoony. Too much of the white guy.”

Which is a shame because the core idea here of turning the fight into a teaching exercise, one in which the older master (Jack) opens the young punk’s eyes (Bruce) and steers him toward achieving his true potential, is well-executed, if somewhat controversial for those more well-versed in all things Bruce Lee. However, who has time for that when there are white guy problems to solve.

But, hey, at least the fight scenes are fun. Mostly.

Too cartoony. Too much of the white guy.