For someone who has built his career around using various animated shows to tastelessly skewer celebrities of all kinds, Seth MacFarlane has amassed a surprisingly larger number of notable friends and frequent collaborators, most of whom presumably don’t mind the occasional joke at their expense or simply revel in the chance to be silly. That MacFarlane would call in some favors to get these friends/collaborators to put in a profile-boosting guest spot on The Orville is not altogether shocking; what is a tad surprising, though, is how quickly they’ve arrived in the show’s run and how mostly serious they’ve been.

Last week, Liam Neeson popped in to play a long-dead scientist delivering a sobering, but ultimately hopeful message via archival video. It’s the type of thing he probably knocked out in a day, maybe even just a morning, and the episode around him was fine, but ultimately ho-hum. Now, in “Pria” Charlize Theron does him one better in playing a full-blown character, an apparent damsel in distress named Pria Lavesque who ultimately emerges as a deceitful love interest. There are some jokes about how hot she is because of course they are, but there’s also a precisely put together plot and rather cinematic direction from Jonathan Frakes, turning “Pria” into a rather exceptional episode.

The story is a classic Trek set-up in that our crew encounter and save someone who turns out to be lying to them, setting us up perfectly for several nice surprise act breaks. Well, not so much “surprise” in that we’re shocked to learn Pria’s story, i.e, that she’s simply part of a mining consortium, doesn’t add up; more “surprise” in the “we’re just waiting to see what the twist is going to be” kind of way. Thankfully, the twist is a fairly fun spin on time travel, revealing that our poor crash landed mining ship captain is actually a traveler from the future who goes into the past to steal antique ships which were destroyed in the original timeline. Thus, Pria saves the Orville from a dark matter storm just so she can sell the ship to some scary aliens back in her present, their future.

This twist assumes the antiques economy will still exist in some form centuries from now, but that’s a thought you couldn’t even really entertain in classic, optimistic Roddenberry Trek mode where the utopian future is supposed to be free of all commerce (well, outside of Ferengi, of course). This is The Orville enjoying its freedom to live up to the spirit of Trek but not the letter of the law of Trek. Beyond all of that, it’s a pretty bold, almost Rick & Morty move to establish The Orville has suddenly transitioned into an alternate timeline since everyone originally died in that dark matter storm.

Of course, while The Orville is obviously so indebted to Trek it almost borders on plagiarism it’s not the only show being used as inspiration. In truth, MacFarlane’s prior animation and live-action work suggests someone who grew up on lots and lots of TV and film, particularly anything in the 80s. So, much of what he does is to simply offer twisted takes on familiar, staid storylines. “Pria” continues that tradition by following in many a sitcom’s footsteps by in telling the post-breakup storyline where a man or woman’’s well-founded suspicions over their ex’s new guy or gal is repeatedly written off as mere jealousy. In this case, it’s Kelly suspecting the worst of Pria and even sucking Alara into her snooping, much to Mercer’s dismay. “Pria” does just enough with this, not too much, and I suspect the emerging case that Kelly should be the Captain instead of Ed is something the show doesn’t realize it’s doing. 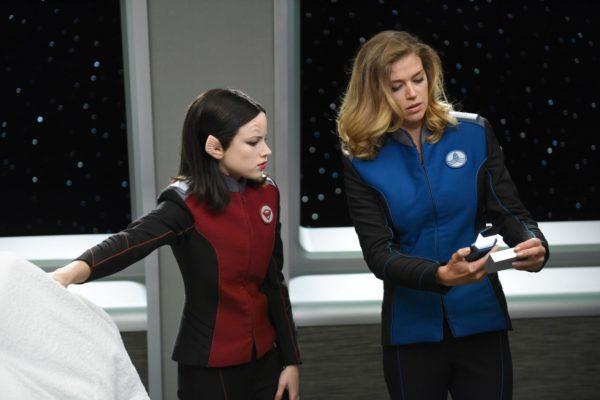 However, what really impresses me about “Pria” is how complete it is. I’ve seen The Orville described as not a comedy, but instead a Star Trek action-drama which happens to feature characters who’ll actually crack a joke from time to time. That’s accurate, but it’s also created a slight imbalance in most of the episodes, resulting in broad comedy bits that just kind of hang in the air and feel out of place.

“Pria,” though, is the first episode where all of the show’s various elements felt perfectly blended together. An opening throwaway bit involving an old Seinfeld episode is called back beautifully in the tense finale. A Million Ways to Die in the West-style gag involving MacFarlane and Theron and bantering ala Woody Allen and Diane Keaton that Annie Hall park bench fits seamlessly. A sidestory about Malloy learning the follies of entering into a prank war with a robot earns a big laugh after a rather lame beginning, and then is paid off to great effect during an otherwise serious confrontation between Mercer, Alara, Kelly and Pria. Several jokes are created through clever editing (such as cutting from Ed’s “I have an idea” to him simply shooting at something to see if that’ll fix things) without ever undercutting the drama.

My only real reservation is with the ending, which doesn’t quite pass the time-travel-logic smell test. It’s like they’re trying to say none of this ever happened, yet it obviously must have because otherwise they would have died without Pria’s help. Maybe I just didn’t completely understand their explanation, or maybe I was just sad to see Charlize Theron disappear. She makes everything better. Even The Orville.

THE NOTES AND NITPICKS

What did you think of “Pria”? Let me know in the comments.