“It was…it was difficult, at best.”

That’s stunt coordinator Donna Keegan’s most diplomatic description for what it was like working on Halloween: Resurrection. Released four years after H20 had injected life back into the beleaguered franchise and suggested a fitting end to things, Resurrection turned around and sucked all of that life and momentum right back out. It tricked audiences by promising another Jamie Lee Curtis performance that turned out to be a 10-minute cameo as prelude to a hacky reality TV/internet-leaning plot featuring Michael slashing through a bunch of dumb teenagers/wannabe actors and sparring with Busta Rhymes, for some reason. Contrary to its title, Resurrection ultimately did what no on-screen protagonist had been able to for over 20 years: it killed Michael Myers for good.

At least the original Michael Myers. Rob Zombie came along with his remakes, and now John Carpenter/Blumhouse are collaborating on a requel which will ignore all of the sequels. But Resurrection marked the end of the (to use the expression loosely) “cinematic saga” of the original Michael who came home that fateful Halloween in 1978.

1. There was a legal clause preventing them from killing Michael for good in H20 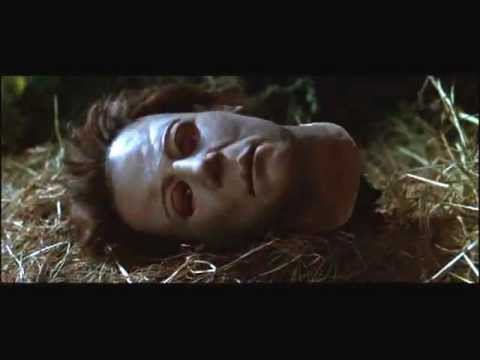 The franchise didn’t have to go down like this. Resurrection didn’t need to be made. Michael could have gone out gracefully, well, if you consider being beheaded by Jamie Lee Curtis “graceful.” Turns out, though, Jamie Lee was never legally allowed to kill Michael.

Here’s what she told Halloween: The Inside Story:

There was something in the contract that said, “You can never kill Michael Myers. They never told me. I said, “Guys, [H20] is entirely predicated on the fact that I chop his head off so there’s no possibility that he could come back. I’m not going to string along an audience again. I’ve spent 20 years of having people go, “Why’d you drop the scissors? Why’d you drop the thing? Why’d you drop the knife?” They go, “So, if you think he’s dead, and the audience thinks he’s dead but he’s not dead is that good enough for you?” I went, “Yeah, I guess.”

Anchor Bay’s “Blood is Thicker Than Water-The Making of Halloween H20” provides a little more clarity. According to the interviewed producers and screenwriter, the dispute ultimately came down to Dimension and the filmmakers wanting to kill Michael for good and Moustapha Akkad very much wanting not to. After it was eventually determined Akkad actually had the legal right to block them from killing Michael, Kevin Williamson interceded on Dimension’s behalf to reach the body-switching compromise.

Before that, H20’s co-writer Robert Zappia had mapped out several potential “Michael’s probably dead, but maybe not?” endings, such as being impaled by a javelin and trapped under the mechanical covering of the school’s pool or plunging to apparent doom inside a flaming school bus which falls off the side of a cliff.

2. Gather ‘round to hear the tale of why exactly Jamie Lee Curtis agreed to be in Resurrection

The story of why exactly Jamie Lee Curtis agreed to return for Resurrection just to be killed off is a lesson in why you can’t trust what actors say while promoting a movie. Because if you listen to the line she was selling around the time of the Resurrection’s release you’d believe she was truly invested in seeing it through, while perhaps also being influenced by a post-9/11 mentality since it just so happens Resurrection was originally due out 9 days after 9/11 before being pushed back to July 12, 2002:

“I’m proud to have created such a great and enduring character in a horror movie,” Jamie Lee Curtis is quoted as saying at HalloweenMovies.com. “And when I learned that Michael Myers still was not dead, I had to come back for Resurrection. I’m really interested in the idea that the only thing to fear is fear itself. So I wanted to take Laurie to a place where she can look at Michael and say: ‘You lose because I’m no longer afraid of you. Live, die, whatever, it doesn’t matter because the important thing is that your terrorism failed. You’re like nothing. You’re pathetic. You’re a wimp because I will not fear you.”

Jamie Lee’s stunt double on both films, Donna Keegan, however, tells a more likely and sobering story, “Jamie was resistant to come back. She didn’t want to do this final sequel for herself and for her character. To me, it was an oddity that Laurie Strode was able to be taken out so easily. She took it hard.”

But why did she come back if she didn’t really want to? According to H20’s co-writer Robert Zappia, it was simply a contractual issue, one which indicates Jamie Lee might have known exactly what she was in for long before Resurrection was even made, “Even back when we did H20 contractually she had said I’ll be in the first 10 minute of the sequel but then you’ve got to kill me off.”

Regardless of how exactly this all went down and who knew what when, the takeaway is no one is bigger than Michael Myers – not John Carpenter, not Donald Pleasence, and not Jamie Lee Curtis. The only thing that can kill him is audience disinterest, and rather than be strung along like Pleasence in a series of lesser sequels Curtis was probably better served to simply be killed off and wash her hands of it.

SOME WOUNDS NEVER HEAL
Michael & I will see you all next Halloween 10/19/18#Trancasfilms #Blumhouse #Universal #Halloween #H40 pic.twitter.com/Qbj4B9UAPL

Oh, come on! So much for that point. Um, maybe this means she’s ready to finally get a proper send-off since Resurrection did such a shitty job of it?

3. We also have ourselves to blame 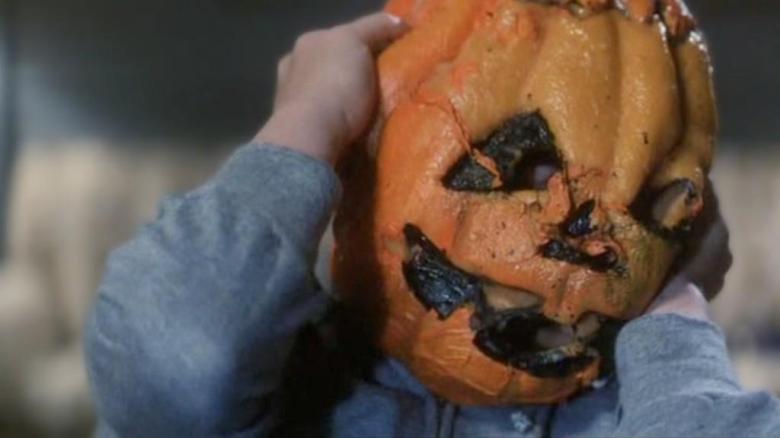 Resurrection partially exists because fans demanded it. When Miramax and Dimension were entertaining the notion of making a Michael Myers-less sequel and ultimately taking a second stab at Halloween III’s well-intentioned anthology approach to the franchise various fansite polls overwhelmingly opposed this idea. Plus, unlike the Miramax/Dimension people, Moustapha Akkad had been with the franchise long enough to remember the fan backlash to Halloween III, and he was not going to let it happen again.

4. Twas market research and self-imitation that brought us Busta Rhymes

The blunt truth, at least as told by Malek Akkad in “Blood is Thicker Than Water,” is LL Cool J was put into H20 as the quirky security guard/wannabe novelist because Dimension and Moustapha Akkad’s company had conducted market research which indicated African-American audiences formed a significant portion of the slasher movie fanbase. So, they wanted to play to that base, and LL Cool J just happened to be transitioning into acting around that time.

For Resurrection, they were more simply trying to imitate themselves by casting Busta Rhymes, figuring the last movie had a rapper and made a lot of money so the next one needed a rapper too. Heck, this time why not also pair him with a black supermodel. Hello, Tyra Banks. Busta, who plays the director of the internet reality show they’re filming at the Myers house, even emerges from the film the hero. He defeats Michael (via electrocution) and saves the final girl (Bianca Kajilch’s Sara).

It was part of a mini-trend of crossover performances from pop stars and rappers in horror movies at the time. A year later, for example, Destiny’s Child’s Kelly Rowland popped up in Freddy Vs. Jason.

5. The director wanted to pull a Clue 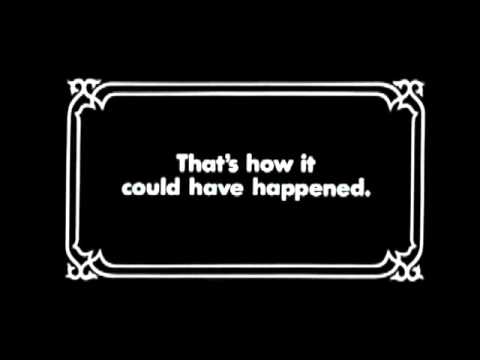 Resurrection director Rick Rosenthal, who also directed Halloween II, shot four different endings and championed the notion of mimicking Clue’s multiple ending strategy of shipping different cuts of the film to theaters thus leaving audiences to have to see it multiple times to see all of the endings. The Freddy Vs. Jason people toyed with the same idea a year later.

Of course, that wasn’t very popular when Clue did it, which is why the subsequent home video release lumped all the endings together. Dimension wasn’t interested in opening that can of worms with Resurrection. So, Rosenthal had to pick an ending and go with it.

6. Their scream queen had all of her screams overdubbed in post 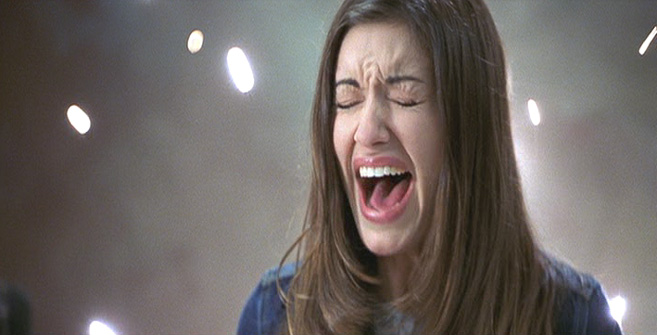 In an interview with a fansite to promote Resurrection, Bianca Kajilch admitted, “I’m quite honestly not that confident in my screaming abilities. I think I sound like a man. I found that sucking on candies does the trick. Jamie Lee was kind enough to pass me a bottle of Vick’s throat spray. I also learned that screaming from the diaphragm helps, too. Scream 101 – I can teach it now at this point.”

Maybe not. Her screams were so inadequate they had to be overdubbed by someone else in post.

7. The Myers home was recreated on a soundstage

Due to lack of location & short evenings the Myers House in #Halloween Resurrection 🎃was built in a soundstage in Vancouver #TriviaTuesday pic.twitter.com/ZIc8fFysBy

This made Resurrection the first movie in the franchise to be filmed outside of California or Salt Lake City, Utah. Rather than repeat Halloweens 4-6’s mistake of finding a local home that ultimately doesn’t look anything like the original from 1978 they simply recreated the home on a soundstage, and digitally added in most of the leaves later.

8. An original super 8mm opening showing Michael as a child was cut

Resurrection originally opened with super 8mm footage meant to look like old Myers family home videos, with Donna Keegan’s son playing young Michael. However, it was cut because, as the director puts it on the DVD, “To humanize the bogeyman was to perhaps the rob the dark, malevolent side of him, and to take away some of his power.”

9. There was going to be a sequel featuring Josh Hartnett’s H20 character hunting Michael to avenge Laurie’s death

Instead, we got this: 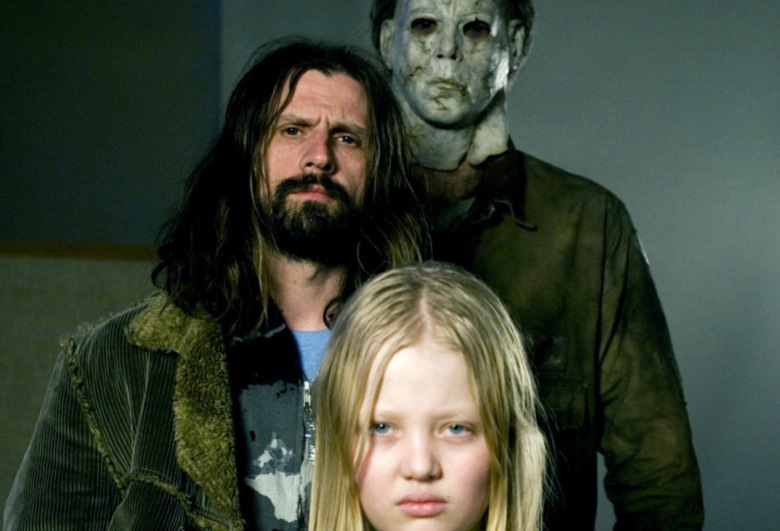 If you liked this also check out my Friday the 13th and Nightmare on Elm Street trivia lists, and you can always circle back around to see my other Halloween trivia articles.

Any corrections or questions? Let me know in the comments.