I get it. There are too many TV shows. We can’t watch them all, and here at the end of the year Netflix and its competitors are absolutely pummelling us with choices. Heck, literally as I wrote that last sentence I looked up at Netflix on my TV and noticed they just added both seasons of Ash vs. Evil Dead. Bruce Campbell fighting an evil puppet version of himself? Um, yes, please.

But before you get to that could you at least hear out my argument for why Halt & Catch Fire should be the next show you binge? One of the all-time great TV shows came and went, unfurling 40 increasingly innovative and moving episodes across four little watched seasons (as in less than 400,000 viewers per episode by the end), and nobody but TV critics seemed to notice. Now that the show’s final season is on Netflix it’s time to rectify that.

Okay. I should explain the title, which is defined in the opening seconds of the pilot via the following text:

It is used here as a metaphor for the personal ambitions of the characters who, via judiciously deployed time jumps, end up spending an entire decade riding the various tech waves of the 80s and 90s, from the rise of personal computing to the dawn of the internet. Across the seasons, the characters repeatedly steal each other’s ideas and break each other’s hearts all while continuing to scratch at the need for perpetual reinvention in an industry where stagnation equals death.

What You Might Think Halt & Catch Fire Is Now That You Understand the Title….Another one of AMC’s failed Mad Men/Breaking Bad replacements (Low Winter Sun, anyone?) centered around an anti-hero, in this case, a smooth dude in a suit monologuing his way into disrupting an entire history at some point in the past?

Why You’re Kind of Right…That’s absolutely what Halt and Catch Fire started out as. Upon its 2014 debut, the show struggled to truly distinguish itself, coming off as Mad Men set in the personal computer industry of 1980s Texas. East coast transplant Joe MacMillan (Lee Pace) is the Don Draper of the piece, running away from some ill-defined past discretion and looking to remake himself into that great American ideal of the industrial titan forever in search of the next big idea. He gives speeches at tech colleges as a cover to recruit new computer coding talent, which is how he meets punk rockish, sexually liberated Cameron Howe (“San Junipero”’s Mackenzie Davis), and he absorbs all of the tech literature in search of “the thing that gets you to the thing,” as he puts it.

He finds that “thing” in an obscure academic journal article written by husband and wife engineering team Gordon (Scoot McNairy) and Donna Clark (Kerry Bishé), who dreamed of a personal computer which could compete with IBM. Their idea all but ignored, Gordon toils away in bitter obscurity at Cardiff, a Dallas-based software company, and Donna focuses on her life as an anonymous Texas Instruments staffer and mother to two young daughters. Joe snake oil salesman’s his way into a senior position at Cardiff all so that he might talk Gordon into building a computer with him in a garage, with Joe the clear Jobs to Gordon’s Wozniak.

And that roughly covers the pilot. The rest of the first season chronicles Joe, Gordon and Cameron’s attempt to take on a giant at great personal and emotional cost, yet in ultimate service to pure, unadulterated, and at times completely joyous ambition. There is a remarkably compelling spark of discovery to this portion of the show, and Lee Pace proves he can do a killer Don Draper speech better than anyone other than Jon Hamm. However, for a show about innovation this first season is too indebted to what came before and the TV whims of the moment it was created in (e.g., atmosphere and all that, but does the dim lighting really have to be that dim?).

As the season progresses and Cameron, Donna and Cardiff’s silver-tongued, Southern-bred salesman Bosworth (who also serves as Cameron’s surrogate father figure) wrestle some of the spotlight away from Joe’s mysterious aura and Gordon’s frustrated genius act, you get a sense of something on the verge of greatness. You don’t have to wait long to see it get there.

How It Fixed Itself…The second season blows it all up and reforms the show into something more worthy of its characters. The [producers] made the wise choice reshape the show around Cameron and Donna, who move on to their own start-up video game company while Joe and Gordon flounder in search of a new challenge.

Joe, from this point forward, assumes a more nefarious role and grows into even more of a Steve Jobs analog than before, yet the show refrains from devolving back into a Social Network/Jobs style great-man-biopic about tortured brilliance. Instead, Joe comes to serve, as TheVerge put it, “A deconstruction of the myth of the misunderstood, erratic genius that surrounds Jobs and similar types.”

Cameron and Donna truly become the center of the show’s gravity, continually budding heads and growing into thrilling, if sometimes frustrating new versions of themselves. Remember how everyone wanted to see what Peggy and Joan’s business partnership might have looked like post-Mad Men? Cameron and Donna get to live that out while Gordon floats in and out of the story as the genius who knows tech but seems to always lack the vision to see what’s coming next.

What Exactly Makes the Show So Great…The writing, acting, and pacing is uniformly awards-worthy, but so is just about everything in the age of Peak TV. What elevates this particular show is this: Halt and Catch Fire is primarily concerned with the intersection of people and technology and the personal cost of endless expansion, but rather than express this through Social Network-style imitation, Black Mirror futurism or Mr. Robot paranoia it repeatedly comes back to the story of a group of people who are, at their core, just looking for ways to connect and communicate. In the wrong hands, that could so easily have come off as hackneyed or overly obvious. Halt and Catch Fire manages to make something consistently profound out of it.

The repeated failure of the characters to truly communicate mirrors our own and the quiet heartbreak they experience along the way proves to be astonishingly palpable. However, as the AVClub argued, there is also an undercurrent of celebration which turns the words “I have an idea” into a thrilling rallying cry, and what other should could pull that off?

Why It Rewards Binge-Viewing…GQ put it best: “Halt and Catch Fire was a show that completely embraced change, filled with vibrant and fully realized characters who gave themselves up to the fires of creation and progress and reinvention, collaborating with each other to make great things and tear themselves apart, only to come back together bit by bit, a little at a time. This constant drive forward makes for an utterly irresistible Netflix binge.”

You’ll be stunned to see where everyone ends up. 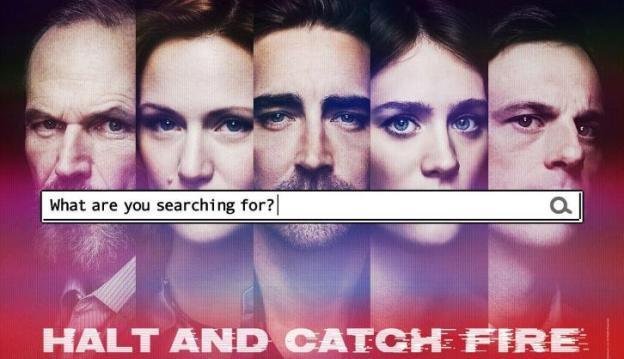 Moreover, binge-viewing enhances your appreciation for the show’s well-crafted writing and attention to detail. Details which initially seem insignificant will be called back two seasons later, and you’ll pick up on it more via binge-watching.

How Best to Binge (aka, Can I Skip the First Season?)…If you want to skip the first season altogether at least read some of the AVClub’s impassioned first season recaps, consult Wired’s detailed binge-viewing guide, or simply watch the pilot and then episode 9, “Up Helly Ya,” which is even more of a culmination for the season than the finale. After that, everything in the second season and beyond is mandatory viewing.

It’s Important to Know…The characters are all fictional, but the history they experience is incredibly accurate which lends the series an added layer of intrigue since it serves as an impeccably researched history of the internet (e.g., online gaming and shopping is far older than you probably realize).

It’s Also Important to Also Know, Part 1…In the final season, Donna delivers a speech about the need for sisterhood and progress in STEM jobs which ranks as one of the most inspirational moments in anything released in 2017, film or TV. The final season, in a transparent attempt to add a modern relevance, occasionally overplays its angle on institutional sexism, but it’s all worth it to get to Donna’s speech.

It’s Also Important to Know, Part 2…There is an episode in the final season in which Joe and Cameron spend an entire evening simply talking to each other on the phone, and it so masterfully pulls off this tricky spin on a bottle episode that it should be taught in screenwriting and directing classes everywhere.

It’s Also Important to Know, Part 3…Don’t skip past the opening credits. They’re only 30 seconds long, and they never get old.

Suggested Follow-Up Viewing If You Only Have A Couple of Hours…Silicon Cowboys, a rags-to-riches-to-rags 2016 documentary about the rise of Compaq, the real world version of Cardiff. As is if the parallels aren’t overwhelming enough on their own, Silicon Cowboys points them out via direct video comparisons to Halt and Catch Fire and interviews with the show’s creators. The doc is currently on Netflix.