Newly added to Amazon Prime, Tom McLoughlin’s One Dark Night is a haunted mausoleum movie that takes way too long to get to the actual haunting part. Or to the mausoleum. Or to anything exciting. It’s a slow movie, is what I’m trying to say here.

An opening scene outside an apartment building where a man has been found dead but with a mysterious stack of corpses in his closet sets a beautifully eerie tone, the camera wandering, trance-like, through the odd crime scene and lingering on the faces of the curious onlookers outside the building. That, unfortunately, gives way to the so very 80s melodrama of random high school girls and the man they’re fighting over. The two halves of the movie don’t connect until the final 30 minutes, which really delivers the goods, if by “goods” I mean glorified haunted house props lurching ever so slowly toward screeching twentysomethings posing as teenagers.

But what more could be expected from a PG-rated, early 80s horror movie? It was already old-fashioned at the time of its production and release and is only more so now.

In truth, I only sat down to One Dark Night because of my affection for McLoughlin’s Friday the 13th Part VI (i.e., the intentionally funny one). One Dark Night was actually his directorial debut. Plus, I’ll admit it, that cover on Amazon Prime looks pretty rad (that’s what they used to say in the 80s, right?):

But what I found was clearly the work of a first-time filmmaker rubbing up against budget constraints and his own inexperience. By McLoughlins’ own admission, if he could remake One Dark Night now he would do almost everything differently. That doesn’t mean the actual One Dark Night we’re stuck with is without its own small charm, though.

The dual plots deal with the notion of a “psychic vampire” and a hazing ritual gone wrong:

On the psychic vampire front, the mysterious man in the apartment at the beginning is a famed Russian psychic named Raymar. As the authorities gather to collect his body as well as those of his apparent victims, a rather curious white-haired gentlemen (Donald Hotton) linkers in the shadows. This man, eventually revealed to be named Samuel, proves to be the Basil Exposition/Crazy Ralph of the piece. He later pops up on the periphery of Raymar’s funeral attended by his daughter Olivia (Melissa Newman) and her husband Allan (a positively restrained Adam West) and approaches Olivia with a far-fetched explanation of what really happened to her father.

Raymar, turns out, was a psychic vampire, the kind that can suck people of their energy without ever laying a finger on them. The dead women in his apartment didn’t have any wounds or obvious cause of death because Raymar had simply stared directly into their eyes and feasted on their youth and energy like Bradley Cooper going through a midlife crisis with Emma Stone in Aloha.

Allan, of course, wants to bounce Samuel’s ominous ass right out of there, but Olivia might just believe him because ever since dear ole Raymar died she’s been having these strange visions. 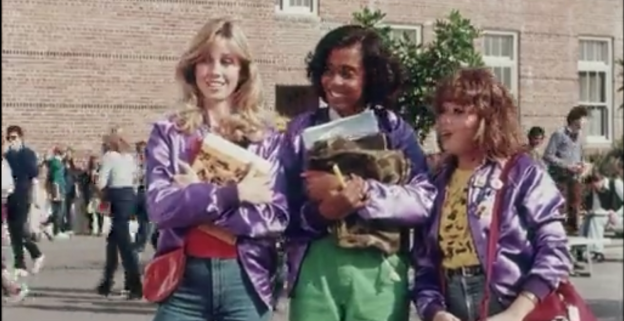 On the other side of the movie, a trio of high school queen bees – Carol (Robin Evans), Leslie (E.G. Daily) and (for some reason) toothbrush-sucking Kitty (Leslie Speights) – put naive new recruit Julie (Meg Tilly) through the ringer by making her sleep all night at a mausoleum, the same one Raymar’s corpse now calls home. It’s a cruel punishment doled out to Julie because she’s had the nerve to date Carol’s ex. Will supernatural hijinks ensue? 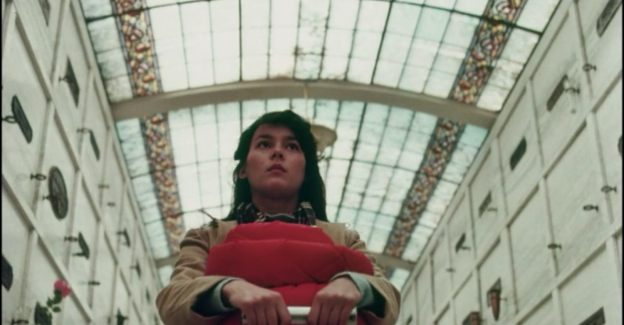 Well, yeah. It’s a horror movie. That’s kind of a given. But One Dark Night sure takes its sweet time getting there.

For some, that’s actually part of the film’s charm. It was produced in 1981 at the height of the slasher craze, released in 1983 after Poltergeist had proven the viability of more family-friendly horror, and generally plays like an After School Special about hazing before shit gets scary. The acting isn’t great, but kind of endearingly so. The same goes for the prop work in the big finish at the mausoleum, which can either make you think “Well, that just looks silly” or “Oh, isn’t that cute – look at how hard they tried despite clearly having no money.”

In fact, the whole thing was financed by a Mormon businessman in desperate need of a quick tax shelter. McLoughlin wrote the script with a friend (Michael Hawes), basing it in part on the fears he felt upon visiting the catacombs of Paris four years earlier. Filmed over 28 days in Los Angeles, with the key set being the famous Hollywood Forever Cemetery, One Dark Night was eventually taken away from McLoughlin and released two years later with a different ending.

It’s not hard to see why the producers would have wanted to take over during post-production. McLoughlin’s script offers a perfectly fine set-up for horror, and his direction shows flashes of promise (particularly in the aforementioned opening) and a keen eye for a killer setting (the mausoleum evokes Phantasm in the best way possible). But there’s no real suspense, Olivia and Allan might as well not be in the movie at all, and the long wait combined with disappointing pay off makes for a rather unfortunate combo. It adds up to little more than a historical curiosity – McLoughlin’s first movie, a pre-Psycho II Meg Tilly, an early acting appearance from future voice acting pro Elizabeth Daily.

One Dark Night is clearly a horror movie made by people still figuring out how to make horror movies, and to their credit what they produced definitely has its strong moments. There just aren’t enough of them.