At this point, I’m beginning to think Deadpool 2’s marketing strategy is going to be more entertaining than the actual movie. There’s been a video of Deadpool utterly failing an attempted Christopher Reeve Superman impression. Then we saw him doing his best Bob Ross, painting happy little trees while also getting high on the fumes. Over the weekend, “Deadpool” live-tweeted the Super Bowl to predictably profane results, and yesterday Ryan Reynolds released a new Flashdance-parodying Deadpool 2 poster. Now, today brings us the teaser trailer officially introducing Josh Brolin’s version of Cable. This time around, there’s actually a whole helping of genuine movie footage, but there’s also 30 seconds of just Deadpool playing with Deadpool and Cable action figures like some kind of superhero YouTuber. He even works in a hilarious Toy Story reference in the process.

That’s an awful lot of non-movie footage in promotional material that’s meant to be promoting a mere movie. It leaves me more enamored with the marketing than the actual movie because it’s all just so unusual, an outgrowth of Ryan Reynolds’s social media savvy and ongoing effort to simply own the internet. Even as far back as when Honest Trailers did their thing for the first Deadpool film, Reynolds popped by as Deadpool to bicker with the movie trailer voice guy. Now, he’s rewriting the rules of movie marketing but in ways that only real make sense when your franchise is built around a self-aware, fourth-wall-breaking jokester.

As for the movie itself, well, there remains the little matter of “someone died during the making of this thing.” Which is a level of reality not even Deadpool would want to or probably even should reference. So, we’re mostly talking about quick action shots here and there, glimpses at the new characters, drop-ins with the old, and an emphasis on attitude and crude jokes over plot:

I wonder how hard they had to fight the impulse to use this particular teaser to actively poke fun at the following oddness: we’re getting Josh Brolin in two different comic book movies in the same exact month. His mo-capped Thanos will continue his search for the best glove in the galaxy in Avengers: Infinity War (because, really, Thanos is just a giant fashionista) at the start of May. Two weeks later, his time-traveling mutant Cable will do a buddy cop thing in Deadpool 2.

However, the comic book gods could not let Deadpool 2 have this day to itself. Marvel also released the first full story trailer for Jessica Jones: Season 2, which will see Jessica searching for answers about her past and confronting a rival spy and his attempted hostile takeover of Alias Investigations. Plus, yeah, the best part of the first season is coming back in a big way.

I refer, of course, to Jessica’s BFF Trish Walker, the once and future Hellcat. She’s going to start tearing some shit up herself this season. Awesome.

Wait. Who did you think I meant? What, Killgrave? But that doesn’t make any sense. Spoiler from last season: that dude’s dead. Why would he be back? 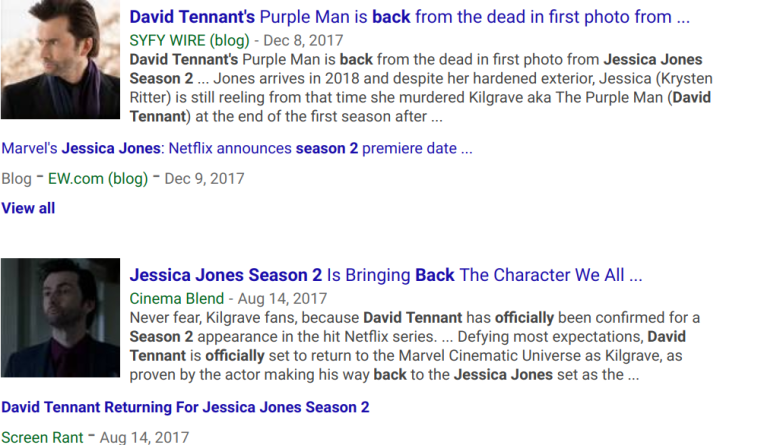 So…huh. Guess they already announced David Tennant was coming back, like six months ago. So, him being hinted at in the trailer isn’t actually a surprise? Well, shut my mouth.