Remember the Wii, Nintendo’s best-selling video game console that got us up off our couches and onto our feet for what was then the world’s most interactive form of gaming? We bowled, played tennis, defeated Bowser, and accidentally threw controllers at TVs all while standing (and sometimes jumping up and down) in our own living room. Those were the days. But do you remember this little screen that would occasionally pop up while games were loading?:

Like Netflix’s “Are You Still Watching?” screen, it was a curious moment of our own technology appearing to judge us, acting like a digital bartender who has determined we’ve had enough and need to be cut off. But you could always just hit “A” and keep on playing. In my experience, that’s what everyone did. Very few people I knew ever took the screen’s advice and actually went outside to appreciate the perfectly blue sky. There was too much video game fun to be had. Still, the Wii had to at least ask, even if it didn’t expect us to heed the advice.

That’s about the level of depth in Ready Player One, Steven Spielberg’s adaptation of Ernest Cline’s once immensely popular, now incredibly controversial novel about a teen’s quest to win control of a virtual universe. It’s a film which preaches a message of moderation and human interaction over virtual escape, but it only does so halfway. Apart from one mid-movie sequence and a heavy-handed ending, the film’s message is secondary to its dizzying assortment of whiz-bang-pow fun, eye popping visuals, and nerd references galore. The message feels diluted between those who wanted to say something with the movie and those who merely wanted to entertain and not challenge/alienate. 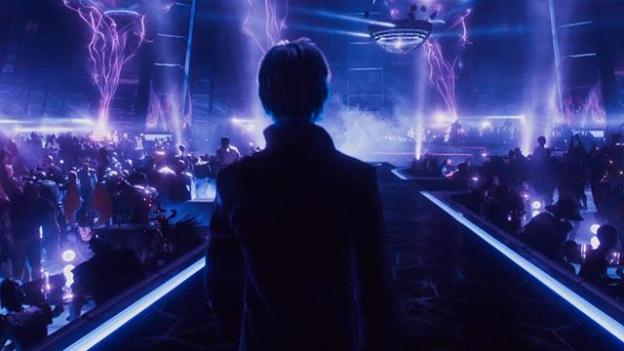 That makes Ready Player One a somewhat hollow viewing experience, the type of film where someone loses an aunt one minute and flirts with a cute girl the next, moving right past ever expressing any grief. In a more honest version of the story, that could actually make for an interesting moment, the character’s obsession with virtual reality rendering him incapable of accepting real loss and challenged to know how to process pain. Instead, the movie just gleefully moves on.

But let’s back up.

Published in 2011, Cline’s Ready Player One initially seemed like a bit of an apotheosis of geek culture. It takes place in a future where reality sucks so much everyone escapes into a virtual world known as The Oasis, a place where you can be and do anything you want just as long as it somehow relates to the pop culture of the 80s (and maybe a little bit of the 70s and 90s on the side). The Willy Wonka-like tale involves a Steve Jobs-type dying and leaving control of his company to anyone who can track down all of three of the puzzles/easter eggs he left behind in The OASIS.

The main character, Wade Watts (played by Tye Sheridan in the movie), so named because his dad thought that sounded like a superhero’s alter-ego, ends up competing with a group of future friends (played by Lena Waithe, Philip Zhao, and Win Morisaki) and an evil corporation for the easter eggs. In the end, victory comes down, mostly, to really, really knowing your pop culture trivia.

In the right hands, a movie version of that story could be like a live-action Wreck-It Ralph meets Who Framed Roger Rabbit?, at least in its potential to marry a good story and genuine heart with endless pop culture references; in the wrong hands, it could be Pixels. And probably the only person on the planet with enough pull to actually get all the licensings rights together was Steven Spielberg.

After spending years trying to adapt the novel into a screenplay, Cline and Last Action Hero writer Zack Penn were stunned when they actually got Spielberg to sign on in 2015, and he had immediate notes and fixes for their script. But that was after Gamergate blew up and exposed the rampant sexism in the video game community. Post-Gamergate, Ready Player One lost its reputation as a tale of harmless wish fulfillment and morphed in the popular consciousness into something more like an unintentional flouting of male privilege. It’s the type of story written by someone who grew up on the tone of 80s movies but doesn’t know how to actually critically engage with any of them beyond a chronicling of trivia and nostalgia. Or so the argument goes.

[Not that I’m the best judge of that, of course.]

Spearheaded by Spielberg and Penn, massive improvements have been made over Cline’s novel, such as streamlining the plot, slightly altering the structure of the story, and turning the love interest, Ar3mis (Olivia Cooke), into more of an actual character instead a glorified prize for the male hero. But Spielberg comes off as largely disinterested in truly engaging with the problems in the source material. Instead, it’s just about cramming in as much action, references, and set pieces as possible. It does tell us to go outside every once and a while, but it doesn’t seem to so much care if we take the advice. How can it? It’s a movie that essentially tells us to stop watching so many movies while also reaffirming how cool VR can be and predicting a day when the geeks will inherit the Earth. How do you shake your finger at us with one hand and enticingly invite us forward with the other? 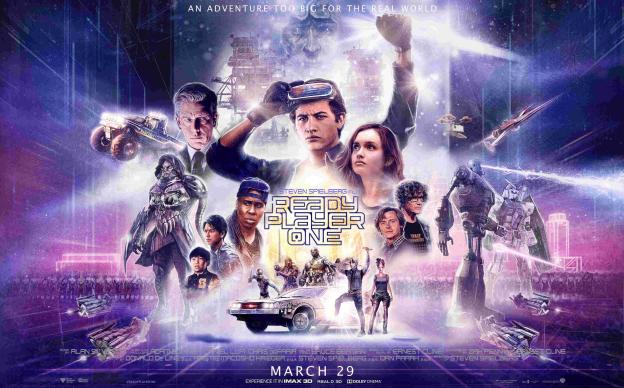 So, this isn’t quite Black Mirror “U.S.S. Callister” caliber commentary. That’s ok. More action-oriented Spielberg instead of drama and theme-oriented Spielberg can still be fun, like the clear joy he has in remaking Godzilla in San Diego at the end of The Lost World or the technological freedom to stage an unbroken, two-and-a-half minute chase sequence in Tintin. That’s the same kind of freedom he enjoys in Ready Player One, which actually takes place in the entirely CGI Oasis so much that it might technically qualify for consideration in the Academy’s Best Animated Film category. In fact, it’s a surprisingly long time into the film before we see our first flesh and blood person.

Upside: the visuals are stunning and the dreaded uncanny valley entirely absent.

Downside: so much time is spent establishing the rules of the universe and exploring the OASIS that it’s difficult to actually care about Wade and his problems in the real world. This is, after all, a movie in which Wade’s OASIS avatar, Parzival, has more screen time than Tye Sheridan. That forces them to move swiftly and communicate mostly just the broad strokes, giving us serviceable, but lacking depictions of sad home lives, cardboard thin villains (Ben Mendelsohn), and a budding romance with Ar3mis. There’s also a thread somewhere in there about the darker reasons people have to escape their lives and how escape is ultimately not the answer.

But the spectacle and action on display is impressive. As IndieWire put it, “The cavalcade of visuals leave the impression that [Spielberg] watched a bunch of Luc Besson movies and decided he could outdo them all. The result is an astonishing sci-fi spectacle and a relentless nostalgia trip at once.”

Plus, it’s kind of interesting to watch Spielberg choreographing action to so many pop songs for the first time in his career. Not surprisingly, he’s great at it. No wonder he now wants to do a musical now.

There is, of course, the nostalgia problem. In this creeping age of intertextuality, where more and more films and TV shows see fit to not just drop Joss Whedon/Amy Sherman Palladino/Quentin Tarantinto-style reference to other movies but steal entire set pieces as an homage, you run the risk of reminding audiences of much better movies they’d rather be watching.

For the most part, there isn’t as much of that in Ready Player One as I feared, since the references feel more like fun, but largely ignorable player skins in a video game than anything else. However, there are a couple of key moments, one of which runs for several minutes, which I won’t spoil but will share that they pulled me out of the movie. Add on top of that all the times composer Alan Silvestri drops out of his original Ready Player One score to include little nods to his old Back to the Future music and you have a lot of nostalgia to process.

So, it’s a bit hollow, gorgeous to look at, stuck with some rather ho-hum human characters, but padded with plenty of engaging action as well as a pop culture homage moment or two which might go a little far (I’m still torn on that last part, really, because the homage I’m thinking of is also pretty amazing to behold). Also, the film runs a tad too long.

Yet I’d still recommend seeing it in theaters. Spielberg has been away from his old cinematic sandbox, the same space he used to return to for fun bit of spectacle like an Indiana Jones or Jurassic Park movie, for far too long. Ready Player Ones is a reminder of what can happen when the king of blockbusters is handed lesser material and still manages to find an emotional throughline and grounding moments, such as taking a page from The Matrix and setting the finale in both the real world and virtual world, with our heroes in peril in both arenas, even if they don’t fully realize it. That makes Ready Player One a premiere movie made from less than premiere source material, and the result is understandably imperfect but entirely watchable.

Much like its protagonist in the picture I included at the top of this review, Ready Player One is a film which reaches into the distance for greatness but failts to get there. The storytelling is lacking and the spectacle impressive, but overwhelming. Still, it’s a delight to see Spielberg playing in this space again and showing what one of the greats can still do with such a massive canvas.