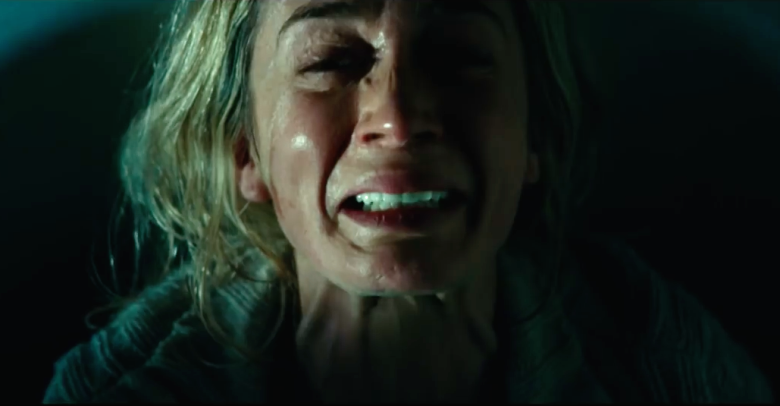 A Quiet Place is a film whose idea has always been there, just waiting to be realized. An almost entirely silent horror movie where anything above a whisper spells certain doom? Of course! Why hadn’t anyone else thought of that before?

In truth, it’s certainly possible someone has already done this before, in a different era, perhaps even in a different format, maybe a short film. Buffy the Vampire Slayer and The Magicians have each had silent-ish episodes. Steven Moffat’s Doctor Who had The Silence villains. There’s that horror sequence in The Artist where the silent character hears sound for the first time. My personal favorite is Netflix’s Hush, an excellent cat-and-mouse slasher featuring a masked killer terrorizing a deaf woman in a house in the woods. But in those cases, sound or the absence of it was used to create tension, force characters into non-verbal communication, or tweak a familiar formula. A Quiet Place, however, weaponizes sound in a way I’ve never seen before.

A QUIET PLACE is an extraordinary piece of work. Terrific acting, but the main thing is the SILENCE, and how it makes the camera's eye open wide in a way few movies manage.

The cold open: a family of five are riding out the apocalypse on a Midwestern farm, only occasionally going into the nearby city to get provisions. They walk barefoot wherever they go and only communicate via sign language, though we don’t know why. From the looks of it they are the sole survivors in the area. The youngest among them is adorably obsessed with rockets and spaceships because that’s the kind of thing little kids are supposed to be into. He hopefully signs to his deaf older sister (Millicent Simmonds, who really is deaf) that a rocket will someday take them away from everything. She doesn’t have the heart to correct him. He doesn’t fully understand why his dad forbids him from playing with the battery-powered toy rocket he finds in the store.

We soon find out why, to horrifying results. While walking home in a single file line, the youngest, taking up the rear position, defies his dad and plays with the toy anyway, pushing it up and down through the air and delighting in the electric noises it makes. He’s completely oblivious to the fact that his mother (Emily Blunt) is now using her hands to smother her own cries of terror and his father (Krasinski) is in a full-on sprint toward him, but the heartbeat-mimicking musical score and alarmingly fast movement in the woods by some unseen beast tells us to be afraid.

And just like that, the kid is gone, snatched away by an arachnopod-like monster that’s all teeth and legs. Suddenly, the family of five is a family of four. As we take the moment to catch our breath, the title card flashes and the movie truly begins, cutting to over a year later at which point the daughter still blames herself for her brother’s death and Blunt is well into a new pregnancy.

It’s an opening which perfectly establishes the rules and stakes (make a loud noise, you die), character dynamics (dad’s a taskmaster because he has to be), themes (it’s all a metaphor for parenthood and the fear of being unable to protect your child), and feel of the entire film (all subsequent setpieces will roughly mimic what we just saw).

It’s also completely unlike anything Krasinski has done before, that is unless his prior two directorial efforts, 2009’s dramedy Brief Interviews with Hideous Men and 2016’s Margo Martindale weepie The Hollars, are quite different than I remember them being. This isn’t a Jordan Peele and Get Out situation. Krasinski hasn’t been a closeted horror movie fanatic this entire time. He wasn’t exactly watching old Wes Craven flicks and taking notes during those down times on The Office set when the cast members really would just serve the internet, play games, or watch movies. Instead, Krasinski’s ambitions have always leaned more toward prestige drama and awards hopefuls.

The Quiet Place script, from Bryan Woods and Scott Beck, two buddies who started making movies together back in high school in Iowa, simply came to Krasinski at just the right time. Emily Blunt had just given birth to their second child, and he saw in the script the chance to use genre to speak to his concerns as a new parent. So, he rewrote the story to make it more explicitly about a family recovering from tragedy and parents doing everything they possibly can to love, support, and ultimately protect their children. That much he knew on is own. To get the horror elements right, he binged the classics, both modern (Get Out, The Witch, The Babadook Let the Right One In) and old (Jaws, Alien, Rosemary’s Baby, and Hitchcock). He then mixed the more standard horror conventions of the older films with the more esoteric charms of today’s artsier, A24-approved classics.

The result is a sentimental thriller that isn’t above the occasional jump scare or tugging on the audience’s heartstrings. The combination might rub some the wrong way, but it absolutely won me over and struck me as an almost primal viewing experience. The story is so supremely simple – one of the most memorable and haunting moments comes simply from a woman stepping on a nail – and the sense of dread so ever-present that people around me in the audience were reluctant to make even a single noise, as if we were all just as vulnerable to the lightning fast monsters as the people on screen. 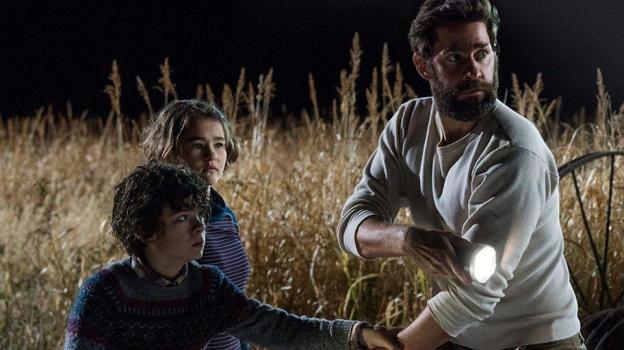 If there’s a disappointment it’s simply that as the film enters its third act it doesn’t always adhere as closely to its own rules, but if Jaws can make you believe a shark can blow up A Quiet Place can get away with some of its slip-ups. Plus, the signature set piece of the film – a pregnant Emily Blunt struggling to hold in her screams while hiding in a bathtub from one of the creatures – is entirely contingent on us not asking too many questions, such as why in the world they ever chose to have a baby – cute, lovable, but impossibly loud baby – in a world preyed upon sound-hunting monsters. However, if you ignore that question you’re freed up to appreciate what will surely be one of the most cathartic screams in any movie this year.

A new horror classic that demands to be seen with the biggest crowd possible.

What about you? Did Quiet Place leave you asking too many questions? Has it left you afraid of the sound of your own voice? Or do you just want to know where Krasinski got all of those fantastic sweaters? Let me know in the comments.