That’s how Florida Project director Sean Baker described Upgrade in his Letterboxd review. One you start piling on that many comparisons, it can very easily seem like you’re not so much praising a film as accusing it of being overly derivative. However, Baker really did mean it as a compliment, and he’s right. Upgrade will at one point or another remind you of all those mentioned films and probably various others, yet never distractingly so. Written and directed by Saw and Insidious scribe Leigh Whannell, Upgrade blends together so many familiar elements into something refreshing and new, the type of kickass action sci-fi that appeals to the 14-year-old in all of us.

Set in a near-future dominated by self-driving cars and smart homes, Upgrade opens on Grey (Logan Marshall-Green), a man’s man drinking his beer and tinkering under the hood of his muscle car while his Vinyl collection spins out old blues on a nearby record player. Grey’s clearly so devoted to the old way of doing things I’m half surprised there aren’t also stacks of Playboys lining the walls of his garage.

Sadly, the future has no room for a man like Grey. He spends his days fixing up old cars and selling them to eccentric billionaires, such as Harrison Gilbertson’s Eron, a baby faced shut-in with Zack Morris hair and a Jared Leto-from-Blade-Runner-2049 temperament. At the same time, his wife Asha (Melanie Vallejo) works at a cutting edge robotics company and talks to the AI’s running her house and car like real people. She seems to find Grey’s obvious technophobia charming, if occasionally inconvenient, like when she wants to stay home but has to go with him to deliver a car to Eron since he’ll need to use her self-driving car to get home and doesn’t know how to operate it.

All of this material is fine and necessary and universe/character-establishing stuff (e.g., Felicity Abbott futuristic production design is gorgeous for the limitations she must have had), but it’s also saddled with slightly cookie cutter characters and a far too leisurely pace, inspiring plenty of yawns. Even after the inciting incident arrives and sees mysterious men killing Asha right in front of Grey while leaving him a quadriplegic, the film lingers on his physical recovery and deep depression a little too long. 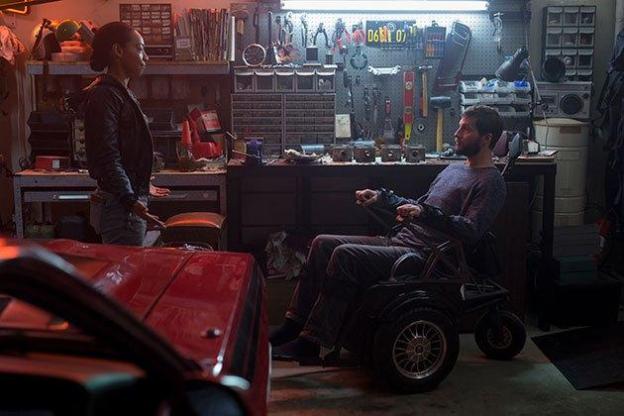 Once he truly hits rock bottom, salvation arrives in the form of a top-secret, experimental computer chip called STEM. Once inserted on his spine, STEM allows Grey the use of his limbs again, though his now computer-aided movements are less natural and more precise, not quite robotic, but not quite entirely human either.

STEM’s not just some piece of tech bypassing Grey’s brain. It’s an AI with a voice only Grey can hear, and the two of them start plotting together to track down Asha’s killers. Eventually, with permission STEM takes over Grey’s body to fight the bad guys with computer-like precision, leaving Grey clueless as to what his arms or legs will do next. This makes for some of the most intriguing fight scenes in any movie this year:

The premise is more than a little similar to what Sony and director Ruben Fleischer appear to be going for with their Venom movie where the symbiote both speaks in a disembodied voice only Tom Hardy can hear and controls his actions. Except Upgrade cost over $100m less to make. And is probably the better movie.

If not better, it’s definitely more violent. Whannell has been playing in the almost family friendly Insidious franchise for so long ago it’s easy to forget his unmistakable knack for cinematic violence from his Saw days, but it’s back in full force here, leading to multiple holy shit moments of either disgustingly over-the-top gore or pitch-perfect violence (depending on your personal taste).

For large stretches, the film plows forward like a more tech-oriented Crank or Taken film, but as a detective (Get Out’s Betty Gabriel) closes in on Grey and the answers to who killed who and why arrive Whannell drops a couple of twists that elevate Upgrade above the competition and leaves you walking out feeling as if they definitely saved the best for last. 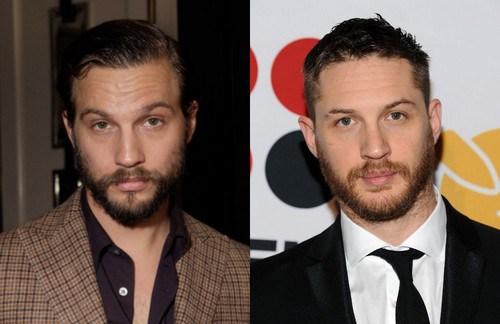