First, there was MoviePass. Then, there was Sinemia. Now there’s AMC’s Stubbs A-List. Pretty soon, the Alamo Drafthouse will possibly have a subscription service of its own. The movie theater economy is changing in a big way, but where will this leave the indies, especially the non-profits?

“No, that’s not us. That’s a third-party app. We have nothing to do with it.”

If you work in a movie theater, you’ve likely had to dole out some variation of the above phrase more times than you can count over the past year. Through no fault of your own, a tech disruptor came along and turned you into unpaid customer support, smoothing over bad experiences, offering point-by-point instruction.

At the start of 2018, Mitch Lowe’s Netflix-for-movie-theaters service MoviePass slashed prices as part of a wildly successful new membership drive. 500,000 new members were added between January and February alone, pushing the total membership up to 2 million, with a goal of reaching 5 million by 2019. That has meant a lot of headaches for actual theater employees, forced into providing guidance for confused customers and thereby making up for MoviePass’ own notoriously undermanned customer support team. While the boots on the ground have been stuck dealing with somebody’s else problem, the higher-ups have lobbed one insult after another at MoviePass, turning the phrase “It’s not sustainable” into a practical drinking game.

But, people love a good deal, and they don’t get any better than MoviePass’ enticing prospect of being able to see a movie a day for just $10 a month. Lowe, the video store owner turned Netflix and Redbox co-founder, recognized an inefficiency in the market. Faced with declining attendance, movie theaters thought the answer was to raise prices in exchange for a more premium experience with better seats, more varied menus, and state of the art screens and sound systems. The higher prices and thus bigger box office totals masked the unmistakable reality: attendance is still going the wrong direction. 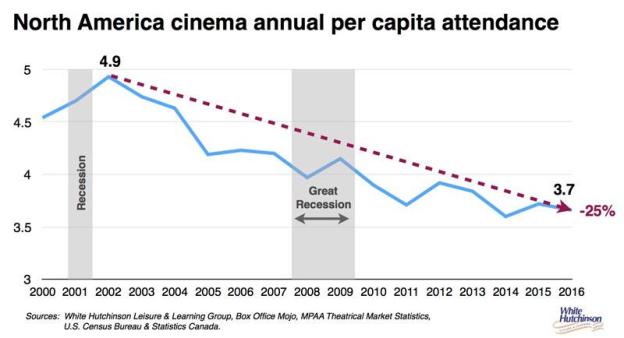 In comes with MoviePass with a Netflix-like price point. The age of ala carte pricing has been giving way to subscription models for years now, and for a generation raised on Netflix and Spotify it feels more natural to pay for monthly access to movie theaters than to continue paying for tickets individually. European theater chains have been testing this out for at least two years to much success, but the North American market was far more reluctant to experiment, with Cinemark taking a half step in offering an $8.99 membership plan to allow customers to see one movie per month. MoviePass simply offered the inevitable and attracted millions of customers as a result.

Except, of course, MoviePass ran a deficit of $40 million last month and will likely fare even worse in June, with a projected loss of $45 million. Its parent company is currently trying to raise $164m. In the same week AMC announced its own $19.95 subscription service for up to 3 movies a week MoviePass countered with a new surge pricing model where patrons will have to pay a little extra (on top of their monthly subscription fee) to see the most in-demand movies at the most in-demand times. Essentially, AMC yelled “Here’s a great new deal!” (no restrictions, more flexibility in ticket reservations) while MoviePass quietly admitted “Our great deal keeps getting worse.” 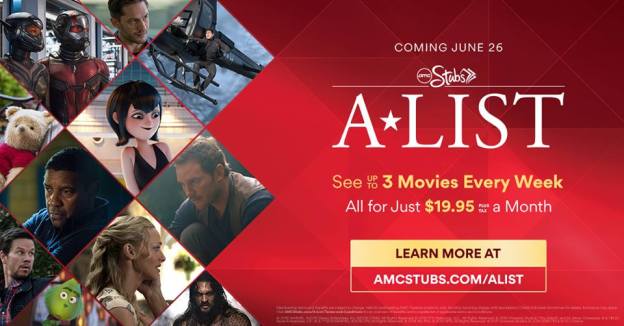 Moreover, AMC, being the biggest theater chain in the world, can afford to run its membership program at a loss for quite a while whereas MoviePass has only given itself a year to continue operating like this before re-assessing its own viability. In success, AMC will likely inspire its chief competition, Regal and Cinemark, to launch suit, until all the major theater chains have their own MoviePass killer, likely inspiring consumers to look back fondly on a time when there was just one service which could be used at nearly every theater in the country.

But AMC, Regal and Cinemark don’t own everything.

Correction: They kind of do, but there are still various regional theater chains and art houses sprinkled throughout the country. What becomes of them in this larger battle over how to charge people for movies?

The Alamo Drafthouse has already signaled its intention to wade into the subscription model waters, or at least test it out in beta before the end of the year. If the Alamo, which uses its own publicity outlet (BirthMoviesDeath), film festival (Fantastic Fest), and indie film studio (Neon) to wield an outsized influence in the film nerd community even though it only has 29 locations in the country, can go that route who might follow? 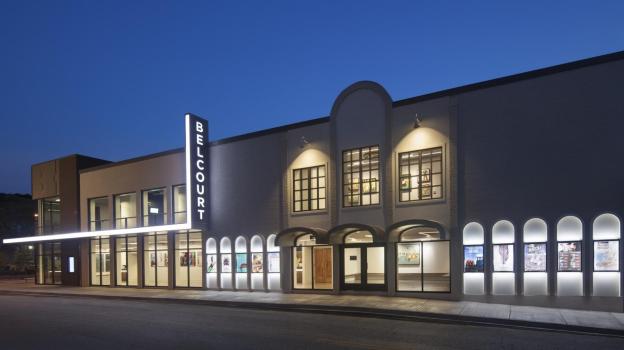 Well, membership plans are nothing new to non-profit cinemas like Nashville, Tennessee’s Belcourt Theatre, which are largely dependent on annual memberships offering customers discounted tickets. MoviePass is a threat to that business model, but also a boon. It’s complicated, as Belcourt’s Stephanie Silverman told MovieMaker Magazine, “I imagine we will sell fewer annual passes and punch cards due to MoviePass, but we hope that more filmgoers will be introduced to our theater through that service and that they’ll return again and again. So far it hasn’t hurt us. We’re seeing people use it and our membership levels are still strong.”

Theaters like that operate on razor-thin profit margins, though, and aren’t likely to ever give in to MoviePass stated goal of someday forcing exhibitors into sharing concession revenues. Still, the indies struggle with the pros and cons of MoviePass just like the big chains do.

Oy vey, that cons list is far too long. It’s why certain indies have opted against playing MoviePass’ game. One such holdout is Portland, Oregon’s Clinton Street Theater, whose co-owner Roger Leigh told MovieMaker Magazine, “We’re all for business partnerships that build community, but this just seems like a blatant attempt to build a community solely for corporate gain.” 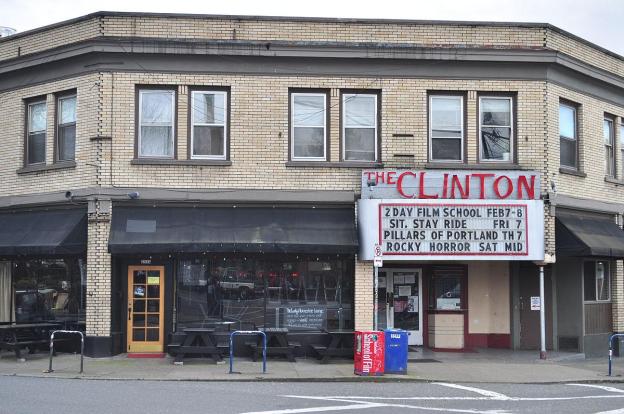 Even those theaters which have chosen to accept MoviePass struggle to accurately quantify how much they’re actually benefiting. It’s easy to measure a rise in attendance, but direct attribution to MoviePass is harder to pin down. “There’s no practical method to parse through the transactions individually,” Amherst Cinema’s General Manager George Myers told MMM. “We started implementing a system with an adult MoviePass ticket designation just to see if we could start tracking it. But if it’s a really busy night with a line full of people and someone hands you a MasterCard, you may not catch it.” 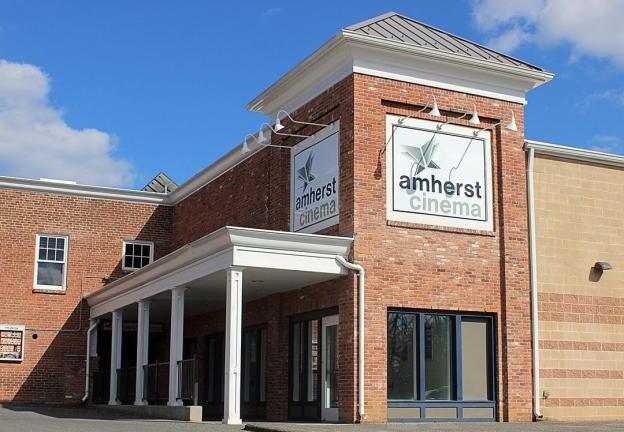 Beyond that, as Forbes pointed out it’s unclear how exactly box office reporting and theater/studio profit sharing, indie theater or random AMC location, will be impacted should the industry move over to subscription models.

Still, MoviePass has now defined the conversation we’re having about movie attendance, and even if it doesn’t survive to achieve Mitch Lowe’s lofty goals it will have served as a larger wakeup call to all theaters. Maybe pushing so hard into creating a premium experience with a premiere pricepoint just pushed more audiences straight into Netflix’s waiting arms, yet at the same time the goal is to give audiences something they can’t already get in the veritable movie palaces we call our living rooms or basements these days, which Hollywood has took to mean going bigger and bigger and bigger with an all blockbuster, all the time model. But what’s a fair price for that kind of entertainment? Or for an indie like RGB, Won’t You Be My Neighbor, or First Reformed?

As Greg Laemmle, co-owner of Laemmle Theatres, told MMM, “I do think MoviePass has a lesson for the exhibition industry, and that is that price matters. For exhibitors, the trend has been toward increasing ticket prices and the cost of the experiences, but there’s something to be said for taking of people who want to see a lot of movies. We’ve got to figure out how to make it reasonable.”