Last week, the PR firm which represents Emily Blunt and John Krasinski sent entertainment journalists a free DVD copy of A Quiet Place along with a gentle reminder: don’t forget about us come Oscar time.

A Quiet Place is an expertly made thriller with a lovely emotional throughline about parents protecting their children at all costs. It has a near-perfect Rotten Tomatoes score and soared to a stunning $329m worldwide on a $17m budget, making it an even bigger hit than last year’s Oscar winner Get Out.

Clearly, critics love it. Audiences love it. But it’s not an Oscar movie. No, A Quiet Place is far too conventionally entertaining and devoid of any larger social commentary to join the stuffy white-shirts celebrating the important art of our day. Get Out was one thing, but A Quiet Place? Pish-posh. Surely the pearl-clutching gatekeepers at the Academy won’t stand fo…

Meet the Academy of Motion Picture Arts and Science’s Class of 2018 and Try to Remember What Movies They’ve Actually Made:

Yeardley Smith, Julie Kavner, Hank Azaria, Emilia Clarke, Lena Headey, Andre Braugher, Alison Brie, Gina Rodriguez, Anna Chlumsky, Amber Tamblyn, Randall Park, Audra McDonald, Hannibal Buress, Dave Chappelle, George Lopez, Sarah Silverman, Damon Wayans, and 900 others with various degrees of film credibility. All talented, to be sure, but according to the Academy’s own bylaws most of them should be voting for the Emmys, not the Oscars.

And remember that under prior President Cheryl Boone Isaacs’ leadership the Academy has set a goal of doubling its numbers of female and diverse members by 2020.

Point being: the Academy is changing. Older, inactive voters are being purged out of the system. Younger industry personalities who might not even work in film are getting invited at a record pace. It’s still a predominantly older, white male organization, but not at the oppressive level it used to be. With the fresh infusion of youth and international voices has come an increasing willingness to redefine the staid old definition of what constitutes an “Oscar movie.”

So, floating a trial balloon like this Quiet Place mailer isn’t as crazy as it might sound. The same goes for A24’s still-developing Oscar campaign for Hereditary and Toni Collette. Whether or not such campaigns will succeed is another story, but it’s no longer fruitless to at least try. Is there a world in which Emily Blunt and Collette’s respective horror movie turns ends with them competing against each other for Best Actress? A couple of years ago, you must be kidding. Now, it’s not absolutely, 100% out of the question. Still highly, highly improbable, but not entirely impossible.

At the very least, they can compete for Best Scream: 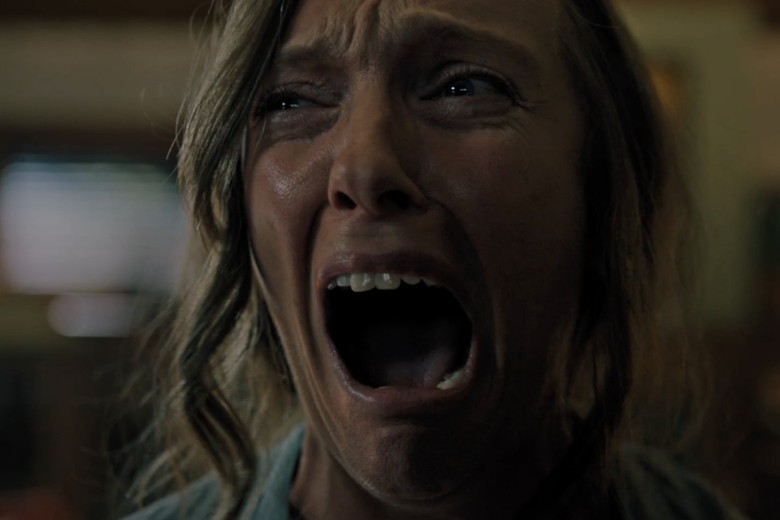 After all, the old version of the Academy saw fit to award Kathy Bates for Misery, Jodie Foster for The Silence of the Lambs, Natalie Portman for Black Swan, Brie Larson for Room and nominated Ellen Burstyn for Requiem for a Dream, Rooney Mara for The Girl with the Dragon Tattoo, Rosamund Pike for Gone Girl, and, indeed, Collette for The Sixth Sense. What might the newly constituted Academy do?

Part of that process, though, will entail convincing Oscar voters that neither Quiet Place nor Hereditary should be thought of as horror. In fact, here’s the language used in the Quiet Place mailer:

“While the film is viewed as a terrifying, nerve-shredding horror, Krasinski did not take this project on for the scares. He was influenced by the story’s universal message around family. This film is a ‘love letter’ to his daughters. He visually demonstrates how it feels to be a parent in this day and age, and the lengths in which a parent will go to protect their children.”

To any horror fan, that has to be absolutely maddening to read. One shouldn’t have to apologize and distance himself from working within the horror genre, yet that’s exactly what Krasinski is doing. It’s in stark contrast to Jordan Peele, who made no secret of his deep love for the genre while promoting Get Out. However, Peele also stayed on message in driving home what he wanted to say about the world with his movie, and that’s what Krasinski (or his PR agent) is getting at as well.

Hereditary’s 31-year-old wunderkind Ari Aster, by contrast, has leaned far more toward simply wanting audiences and reviewers to experience and interpret his film on their own. He’s also been misquoted in the press as distancing himself from the horror genre, but one listen to his interview on Mick Garris’ podcast reveals a more complete picture of a film nerd who happens to love all sorts of genres, horror included.

Will any of this work with Academy voters? Hard to say because, um, it’s July. We have no idea what the Oscar field is going to look like 6 months from now! Moreover, in Quiet Place’s case this is just a mailer sent by a publicist to some journalists. The actual studio behind the film, Paramount, would be the one to launch a full campaign. At last check, Paramount’s longtime awards strategists quit to start their own consulting firm and have yet to be replaced.

Hereditary might actually have the stronger awards prospects because A) it’s more art-house than Quiet Place and B) A24 has already played this game and guided Room and Ex Machina to actual nominations and wins.

Both films, despite those who go looking for Trump commentary in Quiet Place, lack the social immediacy of Get Out, which might keep them out of the Best Picture conversation, but they shouldn’t be forgotten in the acting and crafts categories. Quiet Place, for example, is a shoe-in for Sound Mixing and Sound Editing (for whoever knows the difference between the two) just as Hereditary easily warrants Production Design consideration. More than anything, though, Blunt and Collette deserve to hear their names called come Oscar night.

Nominating either film won’t alone reverse the Oscar’s ongoing slide in the ratings, but it might prove that Get Out and Shape of Water weren’t flukes. If the Oscars are suddenly and consistently open to recognizing genre films it will have been long overdue.