Thanks to the World Cup, around half of the world has to wait another month to see Ant-Man and the Wasp. Not so much for those of us here in the States. So, yeah, I saw the movie last night, and I loved it so much I’m seeing it again tonight. There are so many things to talk about, like how did…

Dude! Did you not read your own first sentence?

How does it connect to Infinity War?

Wow. Just cutting right to the chase there. Pulling that band-aid right off.

How can there even be an Ant-Man and the Wasp after Thanos finger-snapped half the world to death? It doesn’t make sense!

Okay, okay, I heard you. It’s just, this is a hard one to answer without spoiling anything. What I’ll say is this:

Ant-Man and the Wasp is pretty much completely its own thing, separate from Infinity War. If you walk out before the mid-credits scene you’ll have simply seen an unfailingly charming Ant-Man sequel that clearly takes place before Infinity War. There are, of course, multiple references to Civil War, as there would have to be since Scott Lang’s actions there resulted in him being stuck on house arrest for 2 years while Hope and Hank ran from the law. But that’s pretty much it in terms of significant MCU references in the main body of the film. Otherwise, Ant-Man and the Wasp is entirely true to its title – it’s a movie about the wacky, more family-oriented world of the smallest superhero and his mostly superior partner.

Tell me about the Wasp! 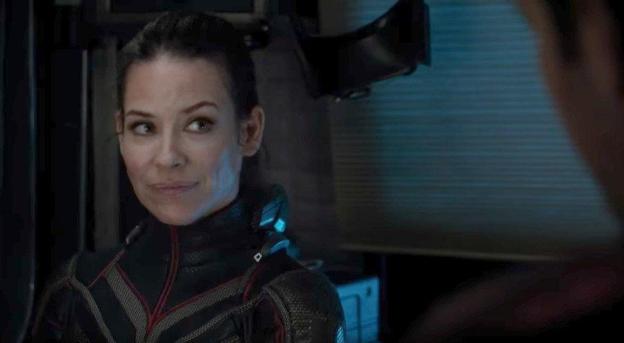 She’s, well, a total badass. Marvel movies have had capable female heroes before who factored heavily into the story, most notably Black Widow as Cap’s work wife in Winter Soldier, but this is different. This truly does feel like it’s Ant-Man AND the Wasp’s movie, not just Ant-Man’s.

Does she steal the movie? I bet she totally does. 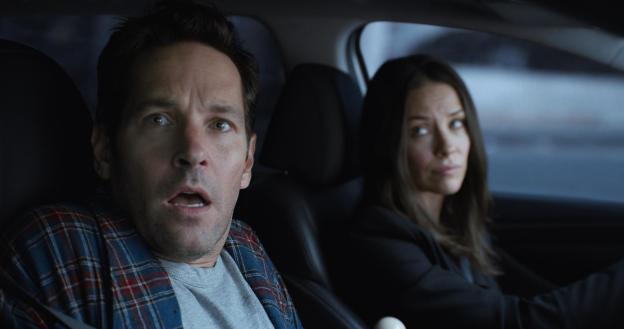 Early reviews have been quick to suggest Wasp and the Ant-Man would be the better title since this is more her movie than his, and I get that argument. From a screenwriting perspective, the story completely bends around Hope and Hank’s search for Janet. Scott is mostly just around to help them reach their goal. But the same was true of the first film as well. Hope is forever looking to repair a relationship with a parent while Scott is forever preoccupied with figuring out how to be the best dad possible to his daughter Cassie.

This time around she does have more fight scenes than Scott does, and they’re uniformly amazing, making great use of her wings and showing what we’d already guessed to be true: she’s simply better at this than Scott.

The character dynamics, however, haven’t changed drastically. She’s still the more intelligent, physically capable, determined one; he’s still the funnier, more emotionally available one. That means she’s often forced to put on her serious face when he does something immature. So, there’s still quite a bit of the old “behind every great man is a woman rolling her eyes” gender dynamic here, just applied to the world of superheroes. Because of that, Hope isn’t really allowed to steal the movie. She only works in combination with Scott. That being said, she does get to crack a couple of her own jokes and actually smile a time or two. That’s at least an improvement over the first movie. 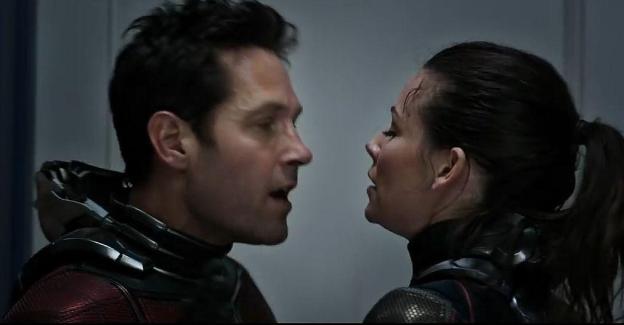 Marvel Studios movies, at least those made over the past couple of years, are romance-averse, usually preferring to stretch out will-they, won’t-theys across multiple movies. Ant-Man, possibly owing to its status as a holdover from the Iron Man development days, stood out for actually having Scott and Hope kiss at the end of the film. However rushed that might have felt to certain audiences, the conclusion was clear: the MCU finally had its first real superhero couple, predating Vision and Wanda by several years.

Ant-Man and the Wasp, however, is not the superhero rom-com some had expected. Hope is in the same headspace occupied by Judy Greer’s character, Scott’s ex-wife, throughout the first Ant-Man. Namely, she clearly has affection for the guy, but she doesn’t know how reliable he is. He has to earn back her trust.

It works surprisingly well. In both movies, Scott ultimately has to prove himself to Hope, and that’s totally fitting considering how much of a well-meaning fuck-up he is. Ant-Man and the Wasp, then, isn’t so much about a superhero couple working together as it is about a badass woman doing what she has to do save her mom while also deciding if the man she likes is actually worthy of her.

As the director Peyton Reed told Total Film, “It couldn’t just be about them having to come together as heroes. It’s how do they coexist as a man and woman. The gender politics of the thing.”

Geesh, so serious. Just tell me about the jokes. 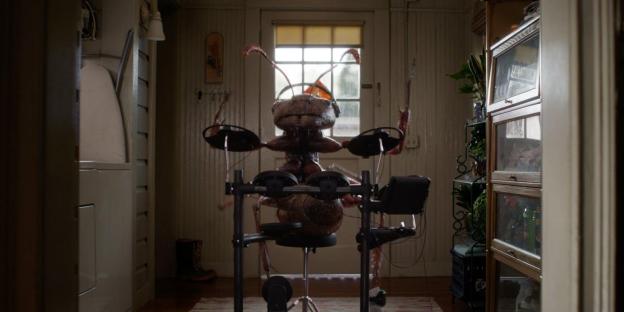 This might be Marvel’s first bonafide comedy. Inspired one-liners, ingenious “look how big/small they are” sight gags, even cell phone ringtones consistently elicit laughs, so much so that the superhero movie stuff feels secondary. This turns problematic on the rare occasions when the story has to stop to dole out necessary, dead serious backstory, at which point the story comes to a noticeably screeching halt. In that way, Ant-Man and the Wasp doesn’t juggle its comedy and drama nearly as well as its predecessor.

Does it have that awesome “You go low. I go high.”/”I have wings. Why would I go low?” bit from the trailer?

Actually, no. Ditto for “Ant-Man and the Wasp, teaming up.” There are several little lines like that which are in the trailers but not in the film.

Is there just the right amount of Luis and his gang? Too much? Too little?

Just the right amount. Marvel doesn’t always know what to do with comic relief side characters in sequels. In the case of Kat Dennings’ Darcy from the Thor franchise, they gave her a lot more to do in the sequel, arguably too much, actually. Luis, Dave, and Kurt are saved from that fate in Ant-Man and the Wasp. As a group, they likely don’t have significantly more screen time than before, yet they are simply better utilized as ex-cons with their own struggling security company. Luis has more individual screen time, but Michael Pena’s charm never runs dry and the script masterfully saves one of his patented lightning-fast Drunk History monologues for just the right moment.

What about the villain? Is she crazy for no good reason like the Yellowjacket?

“[Yellowjacket] in [Ant-Man] felt like a bit of a vestige from the era in which that project was started, [which was] around the time of Iron Man 1, where you have an antagonist who has a similar power set [as the hero],” Reed said. “I was hell-bent on doing something different in [Ant-Man and the Wasp].”

So, this time Reed gives us Killjoys’ Hannah John-Kamen as Ghost, a mysterious villain with the ability to phase through matter. For spoiler reasons, the less I say about her the better, but she is ultimately a far more sympathetic presence as well as a truly physically imposing one. The fight choreographers make brilliant use of staging action scenes in which one of the people fighting can simply disappear to avoid a punch, kick, or projectile. I would still hesitate to call her a great villain. Heck, I would hesitate to even call her a villain. She’s more someone who occasionally gets in their way but has pretty good reasons of her own.

What about Laurence Fishburne? Or Michelle Pfeiffer?

They [spoilers] … Oh, damn. Um, they’re both great. Let’s stick with that for now.

Will my kids love it?

Absolutely. This continues to be the family film wing of the Marvel Cinematic Universe, invariably centered on fathers and daughters. In fact, Ant-Man and the Wasp is arguably even more wholesome and family-friendly than its predecessor.  One scene between Cassie and Scott had people at my screening crying (not sad crying, but “that’s so sweet” crying), and by people I mean me.

This is starting to sound like a perfect movie.

It’s really more that it’s perfectly pleasant. As a film, Ant-Man and the Wasp is way too busy. Reed has described it as “like an Elmore Leonard sci-fi novel made into a Marvel movie,” and that odd combination of elements results in a story where it is far too easy to lose track of who wants what and why. By the finale, everyone is chasing after the same thing, and when Hope yells “This guy again? You’ve got to be kidding me!” (in reference to side villains led by Walton Goggins) you are left wondering why those people are even in the movie.

The “let’s come up with funny sight gag ideas and work backwards from there” DNA of the story shows a time or two, and the lack of a set genre to work around (like the heist portion of the first Ant-Man) lends Ant-Man and the Wasp an oddly formless feel. So, they just make do with a tired chase-after-the-MacGuffin plot. But there is such a good-natured quality to it all that you go along for the ride, especially when that ride involves Scott in Giant Man mode treating a flatbed truck like a scooter

Bottom line it for me.

Definitely worth seeing. The first Ant-Man has the better story, Ant-Man and the Wasp has the better gags. Either way, Ant-Man is Marvel’s palette cleanser. The first film was the perfect antidote to the grandiosity of Avengers: Age of Ultron, and now Ant-Man and the Wasp delivers exactly the kind of light-hearted romp we need after the soul-crushing Infinity War. In the process, it’s become the Marvel Cinematic Universe sub-franchise I most enjoy watching with family.

But about Infinity War…