I Kill Giants, Danish director Anders Walter’s adaptation of Joe Kelly and J.M. Ken Niimura’s beloved 2009 graphic novel of the same name, has a central problem, and it is best crystallized in the following tweet:

Basically, what’s your level of patience for a coming-of-age story about a young girl named Barbara (Madison Wolfe) fighting monsters which are most likely just metaphorical manifestations of her unspecified grief? Are you in it just to see if the monsters are real or not? Or will you allow yourself to be sucked into Barbara’s fierce campaign to save her oceanside town from an oncoming hoard of Shadow of the Colossus-inspired giants while also dodging bullies at school, avoiding the guidance counselor (Zoe Saldana), and making herself scarce at home to avoid an annoying older brother and overprotective older sister (Imogen Poots)?

On top of all that, have you already seen A Monster Calls? If so, are you willing to watch basically the same movie with a female protagonist instead of male and a slightly different order of events?

Questions like that ultimately sunk I Kill Giants earlier this year, dooming it to an ultra limited theatrical release and a rather quiet second life on VOD. It’s newly out on Blu-Ray, but its reputation as a noble failure persists. IndieWire’s film critic David Ehrlich and Walter even sat down for a fascinating conversation about the film’s perceived strengths and weaknesses.

Walter, an Oscar winner for his short film Helium, argued, “I have a strong reaction to this story because I had to find my own courage from a fantasy world when I was young. I worked with six producers on this, all men from 40 to 60, and they felt the same way. I hope that any teenage boy or girl can find themselves in Barbara because she’s an outsider who has to accept certain realities.”

It’s not Walter’s first time delving into this territory, either. Helium is about a hospital janitor telling a terminally ill child grand stories about the magical place he’ll go to when he dies. Some find it glib and overly sentimental whereas others take it as an emotional gut punch.

If you have 22 minutes to spare, here’s Helium:

The same is true of I Kill Giants. Ehrlich still hates it, arguing “it’s kinda dangerous to tell kids that grief is something they have the power to conquer overnight, and not a monster they could fight for the rest of their lives.” Vulture’s comic book expert Abraham Riesman, however, happily admits I Kill Giants is the first movie to make him cry in the office.

I neither cried nor got caught up in righteous anger in response to I Kill Giants. I more pondered the clearly amazing future ahead of the supremely talented Wolfe, who masters Barbara’s rocky mix of harshness and vulnerability. By the end, I was slightly won over to Walter’s argument, even if I ultimately agree with those who say there’s not quite enough story here to justify a full movie. 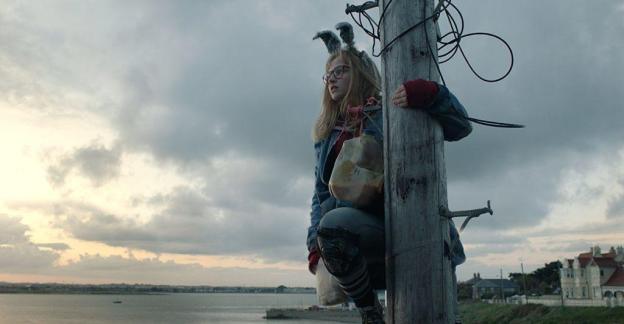 When we first meet Barbara, she’s creating bait for her perceived enemies, carefully positioning jugs around a forest. She looks out at the world through glasses and wears a set of fluffy bunny ears as a kind of armor, the unofficial costume of her unofficial job as the island’s expert giant-hunter. At home, she has nothing but contempt for her video game-obsessed brother and his troglodyte friends, and every bit of the real world she overhears from her overworked, perpetually stressed out older sister simply pushes her further into fantasy. Walter captures all of this as if we’re visiting some long lost Amblin classic or perhaps an alt-cut of The Goonies. 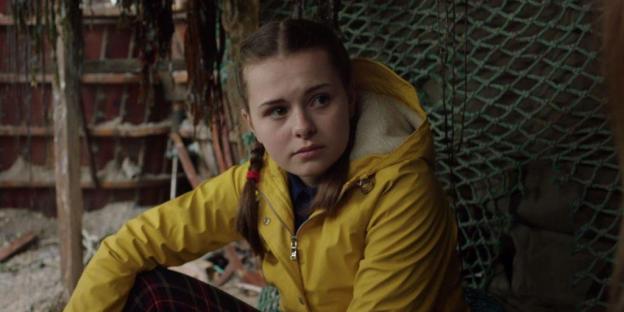 Eventually, Barbara gains a friend in Sophia (Sydney Wade), a new student with a British accent and no one to talk to. To Sophia, Barbara’s rantings about giants and hunting is mostly a fun game; to Barbara, it’s a deadly serious calling, but it’s not one she shares with just anyone. The new school counselor knows what’s really going on with Barbara, but she never outright says it, clearly unsure of how exactly to cut through the young girl’s defenses.

The tension here is an adult watching the film can easily guess where it’s all heading. A younger viewer might not, but they might also struggle to engage with the film since it’s so slow-moving. This creates the question of who exactly I Kill Giants is really for, other then devotees of the graphic novel, but there’s enough universality in Barbara’s tale of grief and awkward young friendship to pull in those with plenty of patience as well as a high tolerance for sentiment.

The film delays its reveal of whether the giants are real and what exactly Barbara is running from until the very end, which does it give a distinctly different flavor than Monster Calls. There, J.A. Boyena throws down “the kid’s mom is dying from cancer” card in practically the first minute. Here, Walter and his screenwriter Kelly, adapting his own text, play it for mystery and lean into Barbara’s possible descent into madness. It doesn’t totally work, but it’s at least a different approach.

Still, the impressive special effects add to the effective magical realism, and the shot of bunny-eared Barbara staring down a Titan while holding her gigantic hammer is an all-timer: 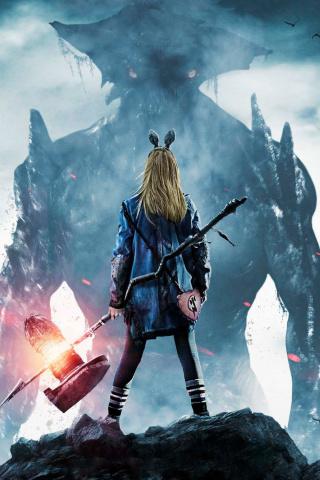 If only the rest of the film contained as much power as that one image.

I Kill Giants’ message, as communicated multiple times throughout the movie, is we are all stronger than we think are and can get through anything. It’s a simple, but inspiring call to arms, and definitely earns I Kill Giants worthwhile applause for its clearly pure intentions. The film isn’t always worthy of that message, but even when it falters Madison Wolfe is there to hold our attention.