In the time it’s taken me to write this article I’ve missed the chance to start Picnic on Hanging Rang, get caught up on 12 Monkeys, finally get around to Luke Cage, or maybe give that Money Heist show a look. It’s not that I want or have the time to do all of those things, but in the golden age of TV the reality is there is always something worthwhile you could be watching. Thus, any Best Of list comes with a giant disclaimer: this is just the best of what I’ve had the time to watch.

As such, in the interest of brevity I’ll just cut to the chase and get on with the list:

15. The Frankenstein Chronicles, seasons 1 and 2

What begins as a grisly, but simple procedure-based crime drama dovetails nicely into fascinating reflections on both the woman behind the birth of a horror icon and a key transitional moment in modern medicine. There are dark turns and thrilling sequences along the way and a gripping central performance from Sean Bean as the beleaguered investigator suffering an emotional crisis while simply trying to get to the bottom of an increasingly complex case.

The 1993 siege of the Branch Davidians compound in Waco, TX was a crucial moment in fostering deep doubt and disdain for the government in rural America. Waco, the Paramount Network mini-series casting Taylor Kitsch as David Koresh and Michael Shannon as lead FBI negotiator Gary Noesner, makes this rather profound point a tad too bluntly at times, but it still does so quite effectively. It also has everything we expect from prestige dramas these days, namely the feel, look, and performance of a (highly bingable) 6-hour movie.

I was one of those “Timothy Olyphant is totally miscast” critics of Santa Clarita’s first season. I’m over it now. His zaniness in the second season won me over, and even if the series still does basically hit the same metaphorical jokes about marriage and suburban living over and over again I’m cool with it when it’s making me laugh so hard, especially as it up the gore factor considerably. Plus, any season of television which features Nathan Fillion as an emotionally needy disembodied head is a winner in my book.

SyFy’s creepypasta-inspired anthology series Channel Zero continues to motor on mostly under the radar, doling out highly cinematic slow-horror for the select few who turn up to watch. The first season, Candle Cove, tackled a kind of modified Children of the Damned–The Ring scenario involving a small town plagued by a seemingly demonic old kids show. The follow-up season, No End House, took on the haunted house genre and explored the metaphorical horror of grief, as the final girl of the story allows a facsimile of her dead dad to feed on her even though it’s slowly killing her. Butcher’s Block similarly uses a known genre, in this case cannibal horror, to speak to larger issues, like mental health and addiction.

Two sisters, one of them a social worker, the other a recovering drug addict, move to a new town to escape their alcoholic mother. They soon come upon a curious stairway in the middle of the woods. Then…well, shit gets crazy. Rutger Hauer appears as the patriarch of a mystical family of cannibals, and the sisters are caught up in a web of human sacrifices and truly horrifying gore.

There is a fourth season on the way. After that, nothing is guaranteed. I just wish SyFy or whoever owns the rights would put this on Netflix in a bid to raise the show’s profile. It deserves to be better known. 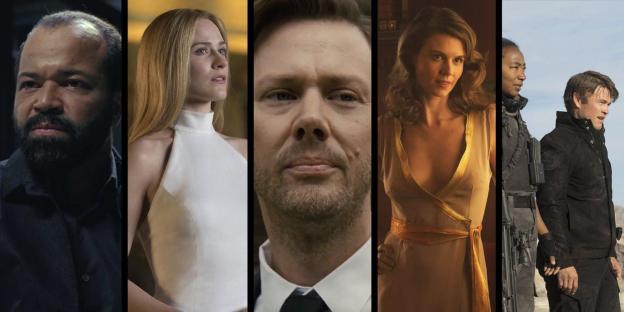 At times, I wish Jonathan and Lisa Joy Nolan would be a bit more okay with simply making something purely entertaining as opposed to a complex puzzle box which aims to make grand statements about the nature of humanity, master/slave dynamics, gender politics, and the moment of self-actualization. But, damn, their ambition, filmmaking, and eye-popping production values has my rapt attention, even if the show is starting to fall prey to Battlestar Galactica syndrome where damn near everyone turns out to be a robot.

AMC’s new horror survival series tackles a real historical mystery about lost British naval ships in the Northwest Passage and imagines, essentially, “What if they got stuck in the ice for years and were gradually hunted by a primeval monster?” The series plays out in bursts of action followed by long stretches, if not entire episodes of talk, despair, and origin story flashbacks. That can make it frustrating if you come just for the thrills, but it ultimately makes for a more rewarding, well-rounded series. Special props to Jared Harris for his performance as the ship’s drunken captain. 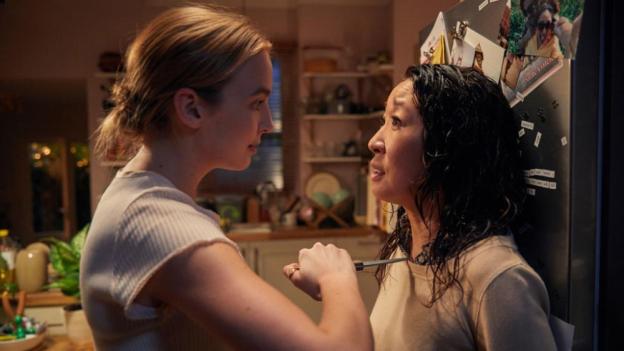 Phoebe Waller-Bridge…really, after Fleabag, that’s all I need to say. Whatever she’s in (like Solo and Fleabag) or whatever she writes for other people to be in (like Killing Eve), I’m interested. Killing Eve, starring Sandra Oh and Jodie Comer, is like Waller-Bridge’s version of Spy mixed with Mindhunters, except instead of Fincher somberness she sprinkles her tale of a female assassin and the woman hunting her with unexpected humor, recognizably human and thus flawed people, and a killer soundtrack of vintage Europop. Sandra Oh is, of course, fantastic as the titular Eve, but Comer is the true revelation as Villanelle, the bored, sociopathic assassin who finds Eve’s pursuit of her invigorating. I imagine blockbuster roles await her, even though Oh is the one who ended up getting the Emmy nomination.

No show in its 13th season can, what, find new creative legs? Nope. Not happening. Not without a significant change to the cast or premise.

Or so you’d think.

Yet, to my complete surprise Supernatural managed a creative rebound and pulled off one of its finest seasons to date. The Winchesters essentially got a little brother (it’s complicated) to mold and protect, and a show built around the good guys thwarting each new apocalypse introduced a juicier “What’s the point of it all?” crisis which hung over much of the season. Beyond that, the show continues to excel at inventive standalone episodes and is more willing to break from its old bag of tricks for the serialized stories. The brothers, for example, still keep secrets from each other, of course, but only for a couple of episodes now as opposed to entire seasons. And quest narratives now take a backseat to character growth.

This is a tough one to pick because less than half of The Good Place’s second season actually aired in 2018. If not for that, I would have this ranked even higher because seldom have I seen a sitcom so thoroughly committed to constant reinvention and experimentation. Community, obviously, but Good Place’s experimentation has none of Dan Harmon’s unmistakable smirking, replacing it instead with throughtful reflections on morality and the potential for good in all of us, even a demon like Michael.

Awww, the joy of watching a good show turn into a great one. GLOW’s evolution into becoming the new Orange is the New Black is complete. What began as an enjoyably flawed story about two white girls has turned into a richly rewarding ensemble story about a diverse group of women finding sisterhood together while fighting against the constraints put on them by men. Plus, it’s still so much fun watching them work out their drama through kitschy 80s wrestling.

Bill Hader’s Barry is a bit like a version of Get Shorty where the mobster is a hitman and the movie producer he meets is just a self-serious acting coach (Henry Winkler). Except it’s so much better than that description would lead you to believe. Hader’s titular Barry is a hitman who hates his job even though he’s good at it, and he suddenly decides he wants to be an actor even though he’s terrible at it. With Stephen Root in tow as Barry’s uncle/boss and Sarah Goldberg and The Good Place’s D’arcy Jarden aka Janet filling out Barry’s acting class, the ensemble is stellar, and the comedy pitch black and often quite unpredictable.

Some of the best journalism going at the moment. It just happens to come packed with jokes.

The producers wrote themselves into a corner at the end of the second season. After all, how does a show called The Magicians continue after its characters inadvertently caused all magic in the world to be turned off? Admirably, the show refused to take the easy way out. Rather than rushing to return things to their default setting, the entire season was about the wide-reaching aftermath of a magical world suddenly going dark. Some characters coped with the change better than others, and Quentin, our presumptive hero, clung to his belief that all could be solved through a quest.

Not to get too heavy about it. After all, this is a show in which a scene like this happens:

Yep, two characters spoke entirely through pop culture references as a sort of code to avoid being found out by their otherworldly enemies. That’s just one speck of the level of formal experimentation in season 3, from something as little as casually working “fuck” into the dialogue to playing an entire section of one episode in near silence to doing a full-on musical episode. The Magicians is a different show every week, yet it also always remains somehow recognizably itself.

Arriving in early January, this British import struck an immediate chord with its title – The End of the F****** World – sounding like a perfect summation of the gloom and doom of the day. However, that title is actually just a reflection of teen angst and the redeeming joy of young love.

If this was the 90s, World would be a hip indie movie making major waves at Sundance, getting instantly scooped up by Miramax for millions, and setting up its directors for a solid decade of impressive work, with probably a failed dalliance or two with the mainstream. But this is 2018, and for World’s unabashed celebration of those kinds of 90s movies to work, it has to also offer something new and relevant to the mix. Thankfully, it does that by asking what if halfway through a clever Tarantino story or darker-than-usual Wes Anderson script the movie we were watching suddenly developed a conscience and delved deeper into its endearingly complex characters while still managing to seem, well, cool as fuck.

This docu-series about an Oregon cult from the 80s touches on so many hot-button topics that it feels almost like the directors used some kind of advanced computer algorithm to find the perfect, most zeitgeisty subject material possible. Their refusal to take a side between the religious zealots and their don’t-tread-on-me neighbors ensures the debate over what to make of the story continues to this day. Like most good Netflix docu-series, Wild, Wild Country inspires outcries of “How have I never heard about this before?” Once you finish the show, though, you won’t soon forget the story of Sheila, the guru, his sex cult, and a completely mystified small town in Oregon.

2018 TV Show I Simply Haven’t Seen/Finished Yet: Picnic at Hanging Rock, 12 Monkeys (I just started the final season), The Americans, The Assassination of Gianni Versace, Atlanta: Robbin’ Season, Corporate, Counterpart, The Expanse, Pose, The Looming Tower (it does have a solid pilot episode), Luke Cage: Season 2 (still stuck on episode 2), Legion (can’t get past the emotional emptiness of it all)

What about you? What are some of your favorites of the year?