1. Mission Impossible Managed to Finally Grow Its Audience (Except Not)

In his recent interview on Variety’s podcast, Mission: Impossible – Fallout director Christopher McQuarrie lamented the franchise’s frustrating stasis at the box office. They just can’t seem to top Brad Bird’s Ghost Protocol, which still owns the franchise records for top domestic and worldwide totals. McQuarrie’s Rogue Nation is #2 on both of those lists, of course, but the pre-releasing tracking showed his follow-up, Fallout, was unlikely to exceed Rogue Nation. Instead of growing, the franchise was going to stand still, largely because, as McQuarrie explained, the bottom has completely fallen out of the 24 and under market for films like this.

McQuarrie and Cruise work so hard to make high octane action movies which demand to be seen on the big screen with the slack-jawed masses who “ooh” and “ahh” at every death-defying stunt, yet they are increasingly playing to older audiences who still value the filmgoing experience in ways younger audiences just can’t relate to.

Well, score one for playing to older audiences because Fallout just exceeded expectations and set new franchise records all around the world. Deadline has the numbers:

Of course, in a Disney-controlled world these numbers don’t actually look that impressive, treading far more in Ant-Man and the Wasp waters than Infinity War or The Incredibles 2. Yes, but the typical Mission Impossible movie nets 70% of its worldwide gross overseas, and Fallout is only out in 40% of the market right now. It doesn’t hit China, for example, until the end of August. Considering the word of mouth and manageable $178m budget, Fallout seems set to at least top Rogue Nation on the franchise charts, if not also Ghost Protocol.

This success is a reminder that while Tom Cruise remains one of the world’s last bonafide, bankable movie stars, he is still only at his peak potential when he’s attached to a Mission: Impossible movie. The Mummy and American Made illustrated there is a limit as to how much can be sold on his just his name only.

Mission: Impossible, on the other hand, is a brand, albeit one closely identified with Cruise. Elsewhere, we know he’ll dream up insane stunts and somehow pull them off practically, like The Mummy’s brillian airplane crash, but we also know he saves the best for the Mission: Impossible movies. These are the ones where he climbs skyscrapers in Dubai, hangs off the side of a building, and learns to fly a helicopter just so he can ram it into Henry Cavill. The fact that he hurt himself while making Fallout only added to its mystique, turning the viewing experience into a slightly sick waiting game to see the shot where he clearly breaks his ankle since they left it in the movie.

But there is a downside here. It’s mostly of the annoying, but true “you have to adjust for inflation!” variety, but here it is: Fallout didn’t actually grow the Mission: Impossible audience. In fact, by BoxOfficeMojo’s estimate it sold fewer tickets than Rogue Nation domestically. 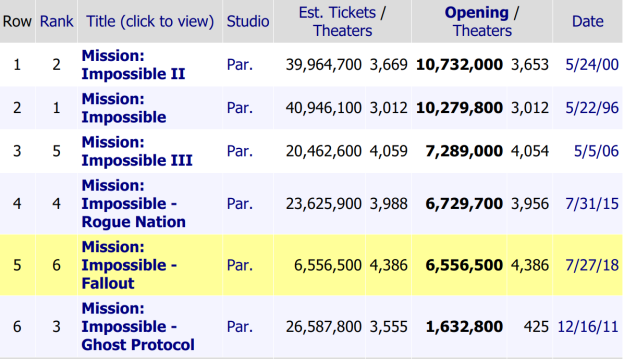 A win is a win, though. Paramount will take it. Now, McQuarrie just wants to know how many 18-24-year-olds actually went to see his movie.

2. After months of no animated movies, Hollywood suddenly has too many 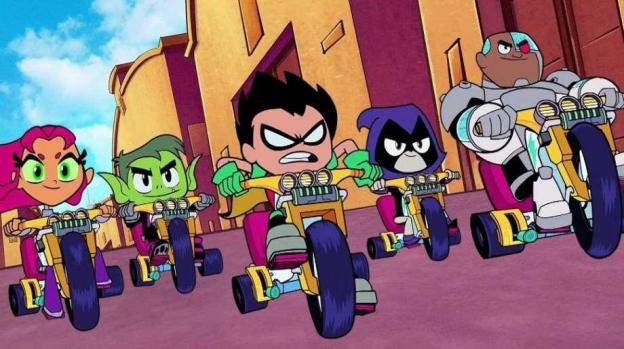 As I argued earlier this summer, the animated film is one of the leading currencies in all of Hollywood right now, along with superheroes and horror movies. As such, family traditions have taken hold and expectations have been formed. We expect there to be a new animated movie every couple of months, but because of school schedules Hollywood still prefers to bunch these things up in the summer or over holidays.

Still, 2016 and 2017 gave families far more year-round animated options. For whatever reason, be it Infinity War-related fear or grueling production schedules, Hollywood offered up a 2018 that is comparatively back loaded with animated movies. After going over three full months without a new animated movie from late March to mid-June, families have suddenly had three thrown at them in just 5 weeks, beginning with Incredibles 2 last month. Sony’s Hotel Transylvania 3, which is normally a Fall franchise, opted for a mid-July release. Now, Teen Titans Go! to the Movies is here just two weeks after Transylvania 3, and the saturation finally shows.

Transylvania is playing to franchise norms, and The Incredibles 2 has become one of the highest-grossing animated movies of all time. Teen Titans never had a chance up against that, but it was always more of a niche play. The studio spent a mere $10m on the budget and might be able to eke out a small profit on worldwide ticket sales alone when all is said and done.

More importantly for their bottom line, Teen Titans Go! to the Movies mostly exists to prop up the various other profit centers connected to the franchise. As Deadline explained:

Realize that Teen Titans Go! is the No. 2 cable telecast for boys 6-11 this year. The Teen Titans Go! Figure game launched on July 19, ranking No. 1 in the Google Play Top New Paid chart, No. 2 in iPad Top Paid chart, and No. 5 in iPhone Top Paid chart. The overall amplification of the franchise has had a ripple effect on 2016’s Teeny Titans game, which has consistently been in the Top 20 on iPhone overall paid games and Top 10 on iPad overall paid games since the movie promotion began. That is very notable for a mobile game in the marketplace for two years. Also, the series earned its second consecutive Emmy nomination this month for the “The Self-Indulgent 200th Episode Spectacular! Pt. 1 and Pt. 2” in the Outstanding Short Form Animated Program category

Given the current state of the animated market, if WB was serious about making a big box office run they would have surely moved Teen Titans away from Hotel Transylvania. They didn’t, signaling they are likely okay with this performing like “one for the fans” that then keeps them funnelling money into toys and video games. A $10m debut is still lower than expected, but it’s not a killer.

3. The July crunch sets in 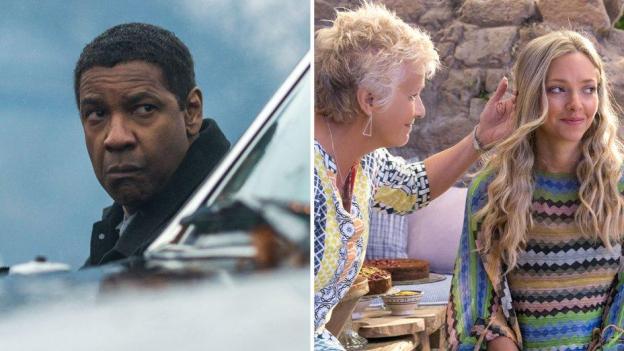 Away from the new releases, holdovers like Mamma Mia 2 and The Equalizer 2 suffered pretty notable drops, which is pretty much a common story every July.

First, the estimated numbers from THR:

Mamma Mia 2 slipped a relatively steep 57 percent in its second outing to $15 million from 3,514 theaters for a domestic total of $70.4 million, ahead of the 10-day total for the first film ($62.6 million). Facing competition for males, Equalizer 2 tumbled more than 60 percent to $14 million for a 10-day domestic total of $64.2 million, identical to the first Equalizer’s 10-day cume.

Neither film is exactly suffering financial ruin. In fact, those are both perfectly laudable 10-day totals. Still, big drops like that are common every July, one of the most brutal months on the release calendar. This is the month which has delivered such recent notable underperformers as Valerian and the City of a Thousand Planets, Detroit, The BFG, The Legend of Tarzan, Star Trek Beyond, Ghostbusters, and Terminator: Genisys. In fact, the box office bloodbath in July 2013 – the year of Lone Ranger, Turbo, and R.I.P.D. – is largely why Hollywood has moved to a year-round blockbuster schedule instead of packing them all in the summer.

The trick is to deliver quality counter-programming, like Mamma Mia’s female-targeted musical, and not just give audiences the same old action scenes and tropes they’ve been asked to swallow all summer. Some films fare better at this than others. Why exactly Sony chose to release The Equalizer 2 a week before Mission: Impossible-Fallout, both older-leaning action films starring 80s/90s movie stars, is a bit of a mystery. I guess they’re really banking on The Equalizer’s appeal as an R-Rated offering.

4. There will soon be four 2018 releases which grossed over a billion worldwide – Black Panther, Infinity War, Jurassic World 2, The Incredibles 2. Disney made three of them.

And with its purchase of 21st Century Fox approved Disney now owns nearly half the marketplace and has newly shown it can be blackmailed by the alt-right into taking hasty action against its own talent. Good times.

Looking forward, there will be new wide releases next weekend: Disney’s Christopher Robbin, Mila Kunis and Kate McKinnon’s buddy action comedy The Spy Who Dumped Me, Fox’s YA adaptation The Darkest Minds, and the latest from Presidential Pardon winner Dinesh D’Souza. Beyond that, The Meg (8/10) promises stupid-fun aquatic horror, Crazy Rich Asians (8/15) tries to prove Netflix isn’t the exclusive home of rom-coms these days, and Melissa McCarthy looks for a bit of a rebound with the promisingly profane muppet comedy The Happytime Murders (8/24).

So, really, Fallout is the last mega-blockbuster of the summer and will have all the IMAX screens to itself for weeks and weeks. Whenever you have the chance, check it out.