The Serpent and the Rainbow, Wes Craven’s 1989 zombie drama, was the first American feature film to shoot in Haiti. It was also the last. You’re about to find out why.

Imagine if some well-credentialed scientist published a book tomorrow that basically said: “Ghosts are real, I can prove it, but they’re not quite what we’ve believed them to be.” Or, if ghosts aren’t your thing, what if the scientist said they could prove the existence of vampires or werewolves or any number of other folklore-ish creatures now best known as movie monsters?

Mind-blowing, right? You’d at least want to hear him out.

That’s roughly what happened in 1985 when Harvard-based ethnobotanist Wade Davis published The Serpent and the Rainbow, a nonfiction account of his discoveries from multiple trips to Haiti. He claimed he had not only discovered the truth behind zombies but also how to create them.

Zombies, the living undead, George Romero’s raison d’etre – they’re real? Well, not quite, but Davis discovered the scientific explanation for how the mythology behind zombies probably first began.

By 1988, Davis’ book had been turned into a Wes Craven movie (here’s my review). Craven and the crew almost died. In the decades since, fellow scientists have tried and failed to replicate Davis’ pharmacological recipe for how to create a zombie. His work is now viewed with suspicion.

Here’s the story behind Wade Davis’ grand discovery along with a glimpse into Wes Craven’s 11 treacherous days in Haiti:

Zombies aren’t real. These people think they are, though. How can we make money off that? – Signed, Random Pharmaceutical Company

In the early 1980s, Davis, a Harvard grad student, was commissioned by a pharmaceutical company and unnamed financier to travel to Haiti in search of the next big drug. There had been rumors of people being declared dead only to turn up alive days later. The media called these people real life zombies. The money men, however, saw a likely chemical cause which could probably be researched and turned into medicine.

Like his cinematic counterpart played by Bill Pullman in The Serpent and the Rainbow, Davis had some strange adventures in Haiti. He fell in love with the woman assigned to show him around. He hung out with magicians embedded deep in the Haitian government. He even managed to crack into some of the Voodoo tribes and learn their secrets.

Then he met Clairvius Narcisse. His first zombie. 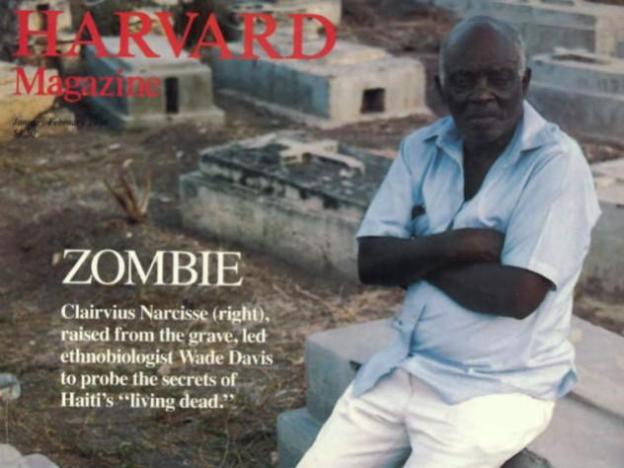 Narcisse had been exposed to a certain powder without knowing it. Within two days, he fell ill and appeared to die, his heartbeat and respiration being so faint it would fool anyone who didn’t know to look for it. An American doctor at a clinic at Port-au-Prince wrongly declared him dead. Later, Narcisse could describe every detail of his own funeral.

After finally reviving and digging his way out of his own grave, Narcisse was greeted by the person who poisoned him in the first place. It turned out to be his brother. The two had been arguing over some land rights. His brother found a novel way to win the argument, clearly, and the final step was supposed to involve Narcisse being injected with a powerful hallucinogen to make him more susceptible to the belief that his soul had been taken away. But after a struggle, Narcisse managed to get away, undosed without any hallucinogen in his system. As any sensible person would after such a nightmare, he stayed in hiding for over a decade.

Davis wrote about all of this in his rather dry, heavily scientific way in The Serpent and the Rainbow. His findings were that Narcisse had been a victim of a very old Voodoo tribal practice where anyone judged to have damaged the tribe is submitted to a multi-step process where they are made to look dead, buried alive despite being fully conscious, and dosed with a drug to make them see things and believe they’ve genuinely been turned into a zombie and thus must submit to their leader’s commands. The exact ingredients in the process include tetrodotoxin and various poisonous plants.

Critics now say Davis’ work, at least in terms of the exact chemical agents he identified, is suspect and not repeatable. He basically says “Nuh-uh” and “It’s a lot more complicated than that.”

Not that anyone knew that in the 80s. Back then, it was more like, “This dude from Harvard says voodoo witch doctors have a way to turn people into the living dead. Cool. Let’s make a movie out of that.”

Everyone Has the Same Idea at the Same Time

In fact, several people seemed to have that same idea, at least to take more serious approaches to voodoo and other Afro-Caribbean religions. Producers David Ladd and Doug Claybourne bought the rights to the Serpent and the Rainbow book. John Schlesinger pursued a competing project (eventually named The Believers) about the practice of Santeria, a religion which embraces ritualistic human sacrifice. Alan Parker hacked away at adapting William Hjortsberg’s novel Falling Angel into a film noir/voodoo mash-up about devil worship in New Orleans. He eventually called it Angel Heart and got Robert De Niro and Mickey Rourke – back when he still had his original face – to star in it.

They all came out in the same 18-month span. Wes Craven later attributed this to typical Hollywood group-think, the way competing projects tend to clump together, but he also thought it was largely thanks to the level of interest raised by Davis’ book. All three films have their strengths and weaknesses, but Serpent and the Rainbow is the only one with a story as good as “suddenly, a 3,000-person mob started throwing rocks at us.”

The Serpent and the Rainbow was supposed to film in Haiti for 30 days. By day 11, everyone was secretly slipping onto a plane. Craven later said of this total experience, “I almost died down there [in Haiti], and I experienced a lot of strange things. So, when I came through it all, not only alive, but healthy, I decided to begin taking my life a bit easier.”

Craven probably should have known better. After all, when he visited the country in 1986 to scout locations he and producer David Ladd were dragged out in the middle of the night to some kind of ritualistic party. Ever the academic, he found the whole thing fascinating. Sure, it was weird when a woman ran up to him, took his wine glass away, and then proceeded to eat the glass in front of him. But, hey, when in Haiti….

Then a live pig was produced and slaughtered five feet away from him.

The pig’s blood was let out into buckets and passed around to everyone in attendance. The priest took mercy on Craven and Ladd and let them get by without drinking any of the blood. They later learned just how lucky they were as such mercy in that setting is rare and the punishment for not drinking the blood is said to be quite severe.

This experienced didn’t dissuade them, though. Instead, it actually endeared the country to Craven even more. After all, you can’t get any more authentic with your voodoo movie than actually going to the place where it happens. The problem was by the time filming started in March 1987 Haiti was in-between revolutions and deeply impoverished. This actually factored into the decision to film there. A country that poor meant plenty of cheap local labor and extras. It also meant dealing with an ever-present volatility, unsanitary conditions, and a brutal, unrelenting heat.

They had to gain the protection of the local military. They had to appease the local religious leaders, which is why a local witch doctor blessed the crew, granting them protection from evil spirits.

On Day 1, co-screenwriter Richard Maxwell pretty much lost his mind. By Day 2, everyone was sick. It was all downhill from there.

After meeting with a witch doctor for research purposes and telling him he wanted to be initiated into voodoo, Maxwell returned to his hotel completely disoriented. He was meant to be there finishing the third act of the script and helping out with any re-writes. Instead, he struggled to focus. Pretty soon, he lost the ability to write at all. By the time Craven and one of the producers stormed his hotel room to check on him, they found a half-naked, completely disheveled and disoriented shell of a man where they’re co-worker used to be. They got him on the first flight out of town, and when his wife and children met him at the airport in Miami he didn’t even recognize them. It was days before he finally snapped out of his hysteria, retaining no memory of what had happened to him.

Maxwell was far from the only member of the production to suffer hallucinations. Bill Pullman claimed to have seen a green cow with television screens for eyes. A crewmember swore he’d interacted with a long dead general who arrived on horseback and asked him to hand over the color blue.

Then, when everyone other than Craven fell ill the “we’re cursed” superstitions set in. The legend is the crew members didn’t take voodoo seriously enough and the locals sought to punish them for that. Cast member Paul Winfield saw a more rational explanation: it was unbelievably hot and they were all living in filth down there. It was only natural for their bodies to turn on them, make some of them see things, give others sudden vomiting fits.

But, all of that pales to what happened when the extras went on strike.

Craven: Things had been pretty tense all along. There were a number of bombings, and we were faced with riots because the thousands of extras we were using kept asking for more money. We were right in the middle of shooting when they went on strike. They surrounded the entire company and began throwing stones. They were ready to do us in. The producers and I had an immediate conference with them and negotiated a higher fee. At that point, we realised how dangerous the country had become for us.

They left Haiti the next day. They filmed a scene at the airport, and then hopped on the prop airplane to get out of Dodge, relocating to the Dominican Republic, where they filmed the rest of the movie incident-free.