This October, we’re challenging ourselves to watch at least one horror movie a day. Today we’re tackling two different movies by director Ti West. We already praised his instant-classic House of the Devil. Now we must deal with his far-more disappointing found-footage effort The Sacrament:

Just once, I want to see a horror movie where a camera crew goes behind the scenes of a cult and finds only blissed out hippies living off the grid, truly meaning no harm to anyone. I want to see a story where it is the camera crew who brings the horror rather than uncovering it. I want there to be a stressed out, desperate producer and/or director, probably someone from a big city like New York, actively sabotaging the small town, rural cult and manipulating them into the type of conflict that makes for a better documentary. Maybe he even kills a couple of them and frames the cult leader, just to see what will happen.

Does such a movie exist?

Is Ti West’s The Sacrament that movie?

Nope. It goes exactly where you expect it to, just with maybe more violence than usual. A modern Jonestown movie can only arrive at one destination, I suppose.

The plot: In the spirit of Cannibal Holocaust, just minus the whole cannibalism part, The Sacrament follows a two-man documentary news crew as they immerse themselves in a mysterious, off-the-grid community. Cameraman Jake (Joe Swanberg) and Vice News host Sam (AJ Bowen) are turned on to this cult by Patrick (Kentucker Adler), a fashion photographer with ultra-rich parents and a formerly drug-addicted sister. After not hearing from her for years, Patrick is suddenly contacted by the sister and invited to visit the drug-free commune she now calls home.

Quicker than you can say “something’s not right about this,” they are greeted by aggressive, armed guards at the commune gates. Entry means bribery and/or temporarily giving up your passport. Once inside, Patrick’s sister (played by eventual The Girlfriend Experience writer/director/producer/co-star Amy Seimetz) makes casual reference to an almost mystical figure she calls “father.”

“Oh, shit, this is totally a cult,” their faces clearly say. “They just called Patrick here because they need his money,” they’re obviously thinking.

Sam, however, attempts to keep an open-mind. He interviews an impressive cross-section of commune residents. Young/old, back/white, female/male – they all seem to be normal, happy people. To paraphrase Pearl Jam, it seems his preconceptions are what should have been burned.

Then a cute little girl slips him a note which reads simply: “Please help us.” 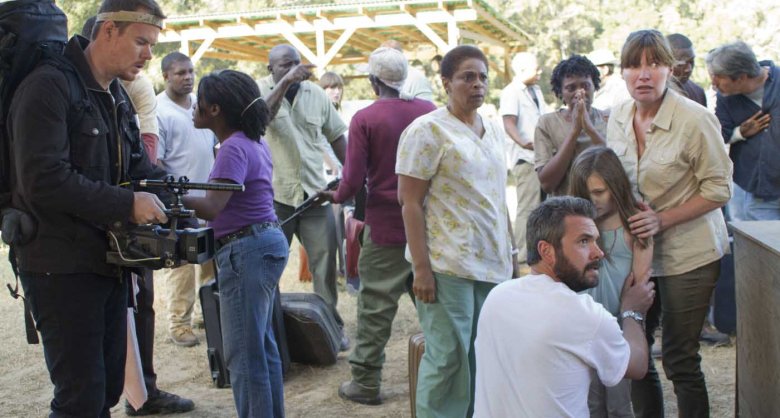 Predictably, bad shit happens at a near non-stop pace after that, and the man who so masterfully created old-fashioned dread in House of the Devil and The Inkeepers suddenly seems enamored with depicting one horrific death after another. No wonder the opening credits lead with “Eli Roth Presents” before getting to “A Ti West Film.”

The two obvious centerpieces of the film center around interviews. Halfway through, Sam interviews “Father” (Gene Jones) in front of the commune and finds him to be undeniably charismatic but also incredibly chilling. He only gets a quarter of his planned questions out before “Father” cuts him off, displaying positively Trumpian tendencies (the term “fake news” is right on the tip of his tongue). By the end, the tables are turned and “Father” interviews Sam, if by “interview” I mean…well, I’ve already said too much.

Upon its release, IndieWire panned The Sacrament, arguing it “lacks the control, the composure, the self-awareness, and the strong characters of Ti West’s prior films.” I’m inclined to agree. The Sacrament has none of the artistry of The Roost, House of the Devil, and Inkeepers.

In its defense, however, Sacrament is at least a found footage movie which comes with glossier production values than usual, the in-universe explanation being that a Vice News crew would have better equipment than just handhelds. Plus, West admirably succeeds in presenting a collection of side characters who come across as believable members of a commune, particularly Seimetz. But there’s just precious little suspense or mystery to be discovered here.

Sadly, as of this writing The Sacrament is the last Ti West horror movie. He’s since directed various segments in horror anthologies, a western (In a Valley of Violence), and episodes of horror TV shows like Scream, The Exorcist, and Outcast. That would probably explain why those latter two, especially, were usually as good as any horror movie. But, I hope West eventually finds his way back to an actual horror film set. The Sacrament is a poor note to go out on.

Thanks to historical examples like Jonestown, the formula for cult stories has clearly been set, but subsequent works to The Sacrament like The Endless and Wild, Wild Country managed to find new angles on this familiar story. The latter is a documentary based on a true story of a Jonestown-cult in Oregon that went in a totally different direction. The Endless is pure fiction filtered through an obvious central question (spoiler): “What if Jonestown actually worshipped a Lovecraft monster?” Both are recommended viewing over Sacrament.