Some men will do just about anything to get out of talking about their feelings. Neil Armstrong went all the way to the freaking moon. Or so First Man seems to argue.

Spoiler alert from 1969: Neil Armstrong was the first man to step foot on the moon.

Spoiler alert from 2018: Contrary to what you may have heard, this new movie about Neil Armstrong (Ryan Gosling) taking those first steps does include multiple shots in which you can see the United States flag clearly planted on the moon.

The spoiler from 1969 is the inherent dramatic challenge of First Man: how to make a movie with an ending which is never in doubt. The spoiler from 2018, however, is a sad reminder of the ongoing culture wars we keep getting sucked into as well as an indication of just how much rah-rah jingoism some Americans associate with the moon landing. This used to be a country so objectively awesome we went to the moon just because we could and the Russians couldn’t, at least not fast enough. So, how dare that La La Land guy (Damien Chazelle) make a movie about the moon landing and not include a scene of Neil Armstrong and Buzz Aldrin triumphantly planting that flag, effectively announcing to the galaxy, “America, fuck yeah!”

Except that scene kind of does happen, just not in the way you’re expecting. That’s because First Man, in general, is not the movie you’re expecting. It takes one of the most famous quotes in human history (“One small step for man, one giant leap for mankind”) and peels back the layers of the space race to focus on what drove that man to make that step. And what was the personal and emotional cost of his journey getting there, depicted here in a condensed history starting in 1961 and ending in 1969? This is a story about a man, not a country. 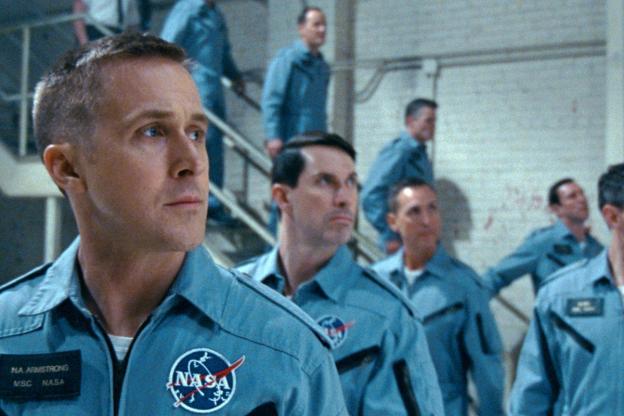 The problem with that approach is Neil Armstrong is a largely unknowable historical figure. He was the stoic counterpart to his Apollo 11 partner Buzz Aldrin’s attention seeker. As seen in the film, when asked at the Apollo 11 pre-flight press conference what they would like to bring with them into space, Buzz (played as a bit of a jerk by Corey Stoll) joked about his wife’s jewelry while Armstrong deadpanned “more fuel.” In 2012, shortly before he died Armstrong authorized his first biography, but he ducked author James Hansen’s questions about personal tragedies and preferred instead to meticulously detail his engineering and NASA career. That’s certainly good enough for science nerds and space race enthusiasts, but not for a Hollywood screenwriter.

So, Spotlight’s Josh Singer has produced a script which is heavy with technical jargon but rather simplistic in its essential revelation about Armstrong: he went to the moon mostly because throwing himself into his work was preferable to dealing with the death of his two-year-old daughter. Think of it is a long prequel to Gravity. There, we meet Sandra Bullock after she has already made it to space as a work-obsessed means of coping with the death of a child. Here, the entire story is about the process of getting up there in the first place.

As Chazelle, who took this gig back when Whiplash had just premiered at Sundance, told EW, “I was surprised to learn Neil and Janet [played in the film by Claire Foy) had lost a daughter before they moved to Houston for NASA. I know that’s something Ryan gravitated to right away: What kind of search for meaning might be propelled by that loss, and could a loss like that actually have propelled Neil to the moon?”

The answer to that last question, at least presented in First Man, is an unequivocal yes. Along the nearly-decade long story, Armstrong’s best friends at NASA die off one by one in terrible accidents, and he continues to internalize everything, refusing to talk to his wife or accept counsel from co-workers. At a friend’s funeral, he hallucinates seeing his daughter again. So terrified of confronting grief is he that he practically runs away from the funeral, leaving his poor wife to bum a ride home.

This makes Ryan Gosling a perfect casting choice for the lead role. Chazelle, who offered Gosling the part before ever talking to him about La La Land, practically weaponizes the actor’s trademark stoicism. Foy, stuck in the usually thankless role of 1960s housewife, crackles with energy. You get the sense that in a different era she would have been conquering the world instead of dutifully raising an absentee father’s two sons.

However, there’s only so many scenes of her shooting Armstrong constant “Please, talk to me! Let me in!” eyes they can shove in there. It is by no means a loveless marriage we are shown, but definitely a strained one, as any naturally would be in such a situation.

Bonus fact not acknowledged in the movie: Neil and Janet did eventually divorce, but not until several decades after his Apollo 11 landing.

The centerpiece of First Man, then, is its depiction of space travel. The climactic moon landing is majestic and triumphant and all the things you want it to be. The music swells. The camera shakes. Aldrin throws jargon at us left and right. Red lights blink. Armstrong keeps his laser-focus on the moon, undeterred by any of the setbacks, beyond determined to at long last accomplish his goal.

However, this, surprisingly, is not the most effective part in the film. That honor instead falls to Gemini 8, Armstrong’s first mission to space. It happened in 1966 and was meant to be the first docking of two spacecrafts. An initial success, the mission quickly went awry as the Gemini 8 slipped into a dangerous tailspin which nearly knocked both Armstrong and his co-pilot unconscious. We view the majority of this without ever actually seeing the spacecrafts involved. Instead, the camera stays on Neil, often switching to pure POV shots. It is as horrifying and tense a sequence as anything I’ve seen in a film this year.

The insanity of basically riding a rocket to outer space becomes all the more clear as the Gemini 8 barely seems to survive launch. Once things go south, you know it will be ok because “one small step for man” still beckons, but for a brief moment you forget and worry they won’t make it back. It’s a true bit of movie magic as well as a testament to Armstrong’s problem-solving capabilities. That’s the version he would probably have wanted us to appreciate, but you can’t blame Chazelle, Singer, and Gosling for trying to find a larger meaning elsewhere in his life story.

It’s admirable of First Man to try to dive deep into Neil Armstrong’s psyche, but by condensing so much history into a single movie, simplifying everything down to supplemated grief, and loading so much onto Gosling’s shoulders Chazelle falls into a trap of his own making. This is his first movie which wasn’t born out of personal passion but instead mere curiosity. By his own admission in interviews, he felt the need to do something different, to tackle a biopic about a man he didn’t know and an era he wasn’t even alive for. First Man is thus his formal experiment in how to do a biopic and it shows. Impeccably made, but cool to the touch.

Patrick Fugit has a small role as one of Armstrong’s earliest friends at NASA. I mention it simply because it’s always nice to see Fugit in anything. He should really be in more things, especially now that Outcast has been canceled.

What about you? What did you think of First Man? Let me know in the comments.