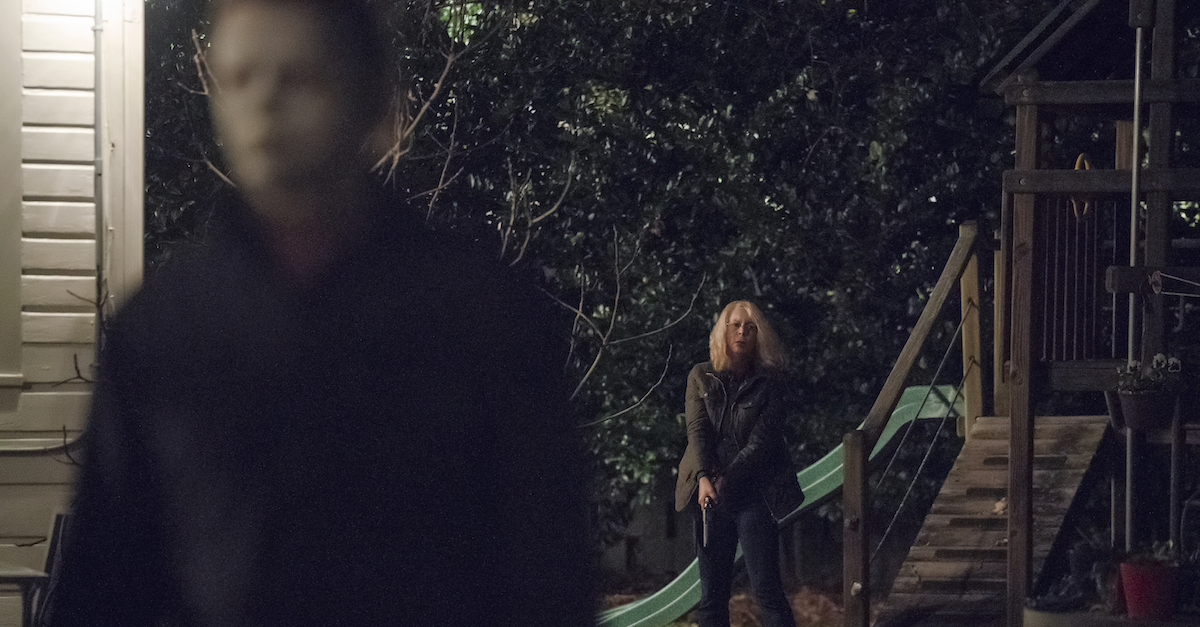 This October, we’re challenging ourselves to watch at least one horror movie a day. Today’s theme is modern slashers.

If you want my completely spoiler-free opinion: the new Halloween is bit ragged around the edges but delivers where it matters. It does what I assumed to be impossible – it makes Michael Myers scary again. Also, yes, John Carpenter’s updated musical score for the movie is amazing, reverent to his original music in some places, playfully experimental with it in others. So, go see the new Halloween fresh and completely spoiler-free. Come back later to read the rest of this. Or, if minor spoilers don’t bother you, keep reading now.

If you want my completely spoiler-lite opinion: 40 years later and Michael Myers is still doing it. Set him on fire. Run him over with a car. Shoot him in the heart. Cut his freakin’ head off! Doesn’t matter. He keeps coming back, at least until the profits run dry. Now, despite being old enough to have his own AARP card, slasher’s original bogeyman has returned to stalk the world’s most unruly of menaces: babysitters.

Except babysitters are far from Michael’s only target in the new Halloween, Blumhouse’s surprisingly strong requel (part-sequel, part-reboot.) Blumhouse, working from a script by David Gordon Green and Danny McBride, has wiped the slate clean and thrown out all the sequels, good and bad. As far as they’re concerned, you can now draw a straight line between Halloween ‘78 and Halloween 2018.

If you know your Shamrock jingle from your Curse of Thorn, this can make the new Halloween slightly jarring. Without going into spoilers, there are things Michael does in this movie which he hasn’t really done on film in forty years. However, there’s also a welcome simplicity to it all.

As explained in a walk-and-talk exposition scene with this film’s generally likable teenagers (spoiler: when they start dying, you miss them): Michael killed five people four decades ago. He’s been locked up ever since. Laurie Strode is the only survivor. Anyone who says she’s secretly his younger sister doesn’t know what they’re talking about, searching in vain for an explanation that does not exist. Michael killed those people for no reason.

Green and McBride take that as their marching order: their Michael Myers, who eventually escapes during a prison/asylum transfer, isn’t a moralistic killer slashing through the sinning teenagers of the world like a God-fearing Reaganite nor is he simply hacking his way through all obstacles while en route to purging his own blood line. Instead, he’s a mindless, heat-seeking missile launched into a world where his target is every human possible. Man. Woman. Child. Nothing, other than a weeping infant, appears to be off-limits for him. By stripping him of even the hint of reasoning mind, they’ve restored Michael to being a truly scary movie monster, one who mechanically progresses from house to house and murders with the inhuman efficiency of a Terminator

Even if Michael has been stripped of reason, the film itself has to have some larger point. There has to be an actual story here, and that falls to Jamie Lee Curtis doing her best Linda Hamilton T2 impression, playing this new Laurie as a buff, emotionally damaged badass who has turned militaristic in anticipation of the oncoming and inevitable battle. Judy Greer is around as her daughter who was raised to be a bit of a soldier because the state took her away. Andi Matichak, who probably has more screen time than both of them, is the granddaughter who just wishes they could be closer. If you think the script is going to pass up the opportunity to eventually have three generation of Strode women face off together against Michael you haven’t been paying attention to the trailers.

That’s because while this new Halloween may borrow the title fonts and some of the cinematic tricks from its 1978 predecessor (not as much killer pov as you’re expecting) its message is squarely aimed at 2018 concerns. This is a post-#MeToo horror movie and it shows. Laurie is a victim of assault, and it has ruined her entire adult life. She’s now a woman who prays every night for Michael to escape from the insane asylum just so she can kill him, but when she finally drives down to the insane asylum to confront him she drowns in a puddle of her own tears, unable to even leave her own car. Mustering the courage to face him is going to be harder than she expected.

That does give the film a somewhat similar shape to Jamie Lee’s H20 – you’re mostly waiting for the final showdown between Michael and Laurie. The script has to jump through a couple of really questionable hoops to make it happen, but once it does it’s frightening, tense, and surprisingly uplifting.

There is no post-credits scene, but there is an audio easter egg. SPOILER: It’s just the sound of Michael breathing under the mask.