This October, we’re challenging ourselves to watch at least one horror movie a day. Today’s film needs no introduction.

I envy anyone who managed to see Halloween upon its 1978 release. To do so would have meant seeing a film that spawned endless imitations and set the slasher template before it was known that that was precisely what it had done. Today, it’s difficult to look at the film as more than a time capsule piece, easy to admire but harder to find scary. Halloween’s story beats feel predictable and clichéd, because it set the structure that slasher films would replicate and build upon, and it’s hard to be scared when you’re forced to remember the familiar story beats flashing on the screen weren’t so well- established in 1978.

But Halloween, with all due respect to Black Christmas, birthed the slasher for a good reason, and it’s not just that it established a repeatable formula the Sean Cunningham’s of the world lazily ripped off without any of the artistry. Halloween started the slasher because it was so good people wanted to see more movies like it.

From a screenwriting perspective, just think of how efficient and stripped to the core Halloween is. A young boy kills his sister. He’s sent to a mental hospital. Years later, he breaks out to inflict more mayhem and carnage on his hometown. Meanwhile, he’s pursued by the psychiatrist (Donald Pleasance) who once sought to help him but now simply hopes to end the upcoming bloodshed. And…that’s pretty much it.

The film traffics in merciless suspense, with no window dressing to distract from the perpetually escalating tension. We don’t even know what caused Michael to commit any of the murders we see. The explanation that he’s just an emotionless, brutal, blank slate (right down to that terrifying, white-painted William Shatner mask) only enhances the suspense. This is a silent, unstoppable force that cannot be reasoned with. He’s going to destroy you, and there’s nothing you can do to stop it.

Even though it set the standard for every slasher to come, Halloween still stands above much of the slasher genre that followed it. Its technical proficiency illustrates how lazy and sloppily put together many of the films that followed. They traffic in mean-spirited, semi-misogynistic violence and shock value. Halloween is sharper and better than that. It’s about suspense, not viscera. Much of that comes from John Carpenter’s direction.

Take the film’s opening, consisting of an unseen individual watching, waiting. Eventually, he dons a mask, walks up the stairs, and murders a nubile, naked young woman. We then see the point of view go back down the stairs into the arms of a middle-aged couple who pull off the mask. Only then does the camera shift to an omniscient point of view, showing us the killer is not a man but a young boy in a clown costume.

Slasher films often utilize the killer’s perspective to make a viewer feel as though he/ she is the one committing the crime, but it’s rarely been used as brilliantly as it is here. It sets the stage for the type of carnage the film has in store, and then sucker punches with the reveal that the crime we’ve seen came at the hands of a child. It might be one of the most perfect horror openings ever committed to celluloid.

The middle portion, which serves to establish the Haddonfield, Illinois setting creates a believable, slice (no pun intended) of life environment where teenagers make Halloween plans, fall leaves blow across the sidewalk, and pumpkins are just waiting to be carved. It feels like a believably idyllic little town, which makes the upcoming violence feel all the more horrific because the setting feels so grounded. Once the violence starts, the film becomes an exercise of almost unbearable suspense building punctuated with brief moments of vicious, though bloodless, violence.

Today, Halloween is also known as the film that introduced Jamie Lee Curtis to the world, and it’s easy to see why she found an early career as the proverbial “final girl.” Laurie Strode is one of the most likable horror heroines. Vulnerable and tomboyish, she exudes warmth and affability that ensures audiences care whether she lives or dies. There’s a moment where she has fled Michael and is pounding on neighbors’ doors. We watch in dreadful anticipation as porch lights come on and then turn off, leaving her still vulnerable. We’re practically on the edge of our seats, nails digging into hands, hoping for a reprieve.

We want her to triumph, which means the film’s seemingly endless series of thinking Michael is dead when in fact he’s not begins to feel like a Kafkaesque nightmare. Even that ending, indicating Michael is still out there, perhaps waiting to sneak into your front door, means the film sticks with you. 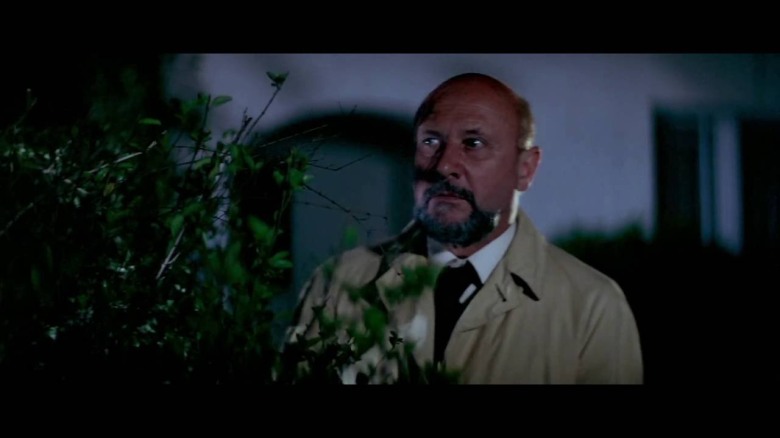 It’s impossible to discuss Halloween without shining a spotlight on Donald Pleasance’s Doctor Loomis. First, he might be the worst psychiatrist in cinema history, as he abandons providing mental help to his patient, instead hoping to simply lock him away and throw away the key. He also has the most fabulous line delivery, altering between manic yelling and sinister whispering about the nature of pure evil and how his patient had “the devil’s eyes.” It’s a performance that should be ridiculous, but Pleasance instead makes the character almost accidentally compelling. His manic energy and dogged pursuit of an unstoppable killing machine adds an incredibly entertaining b-plot to the film’s primary storyline of teenagers and children in peril. He’s so gleefully over-the-top that it makes absolute sense that he became as much of a Halloween franchise staple as Michael Myers.

I think it might be pretty clear from this that I love Halloween. I saw it when I was thirteen, and stayed up all night worried Michael was going to jump out of my closet. Even at thirteen, I knew who would live through the film and who was there to rack up a body count. It wasn’t my first slasher film, and I recognized how they worked even if I couldn’t articulate it. However, it didn’t matter. The film’s too strong, too well-paced, and beautifully filmed to not fall under its sway. It may not inspire the screams and absolute terror it might have forty years earlier, but it’s still worth a watch every Halloween.

Tomorrow: Halloween (2018)& Behind the Mask: The Rise of Leslie Vernon