This October, we’re challenging ourselves to watch at least one horror movie a day. Today we’re checking out one of the latest attempts to glom onto the Stranger Things 80s nostalgia movement.

A group of boys in 1984 talk about almost literally nothing else other than sex. The hot, slightly older girl (Nikki, played by Tiera Skovbye) who lives across the way from the main kid (Davey, played by Graham Verchere) turns out to be super chill about boys peeping on her undressing. In fact, she’s flattered by it and takes it as an opening to start a friendship with Davey and maybe even a relationship. They all work together to fight a monster and seemingly defeat it. Afterward, a first kiss is had. Oh, to be alive in 1984.

But it’s not 1984 anymore. It’s 2018, and the new Canadian indie horror film Summer of 84 plays on our collective nostalgia not for how things actually were back then but for how they were presented as being in the movies. It plays like a mixture of the outsider camaraderie of The Monster Squad, shameless horniness of Porkys, and there’s-a-monster-next-door suburban plotting of Fright Night. Instead of a vampire, the monster, in this case, is a serial killer targeting teenage boys, thus directly threatening Davey and his friends Woody (Caleb Emery), Curtis (Cory Gruter-Andrew), and Tommy (Judah Lewis). 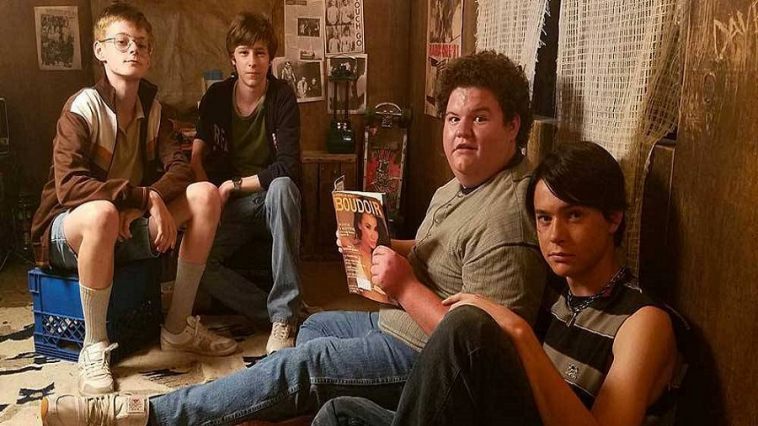 There’s almost zero tension to the central mystery of who the killer might be and much of the nostalgia on display rings false, like a mimicry of what came before without any awareness of what made those past films great or kid characters believable. It hits a nostalgic sweet spot without adding anything new or feeling like it’s in any way interested on commenting on or improving upon what came before. That gives the majority of Summer of 84 an air of simply indulging a rather specific teenage boy fantasy, just like so many other teen films of that era.

But then the ending arrives. Several of these 80s stock types turn into actual characters.  Matt Leslie and Stephen K. Smith’s script jarringly punctures its fantasy version of The Hardy Boys meet Jeffrey Dahmer with stakes-altering death. The whole thing is just like an 80s movie until it really, really isn’t, almost as if the writers and directing team of Francois Simard, Anouk Whissell and Yoann-Karl Whissell are shouting, “Here’s your nostalgia. Now, here’s your cold, hard dose of reality. Hope you like it.”

It certainly worked on me. What about you?

Summer of ‘84 is currently available to stream on Shudder. You can also rent it on all of the usual VOD outlets.

Tomorrow: Interview with the Vampire