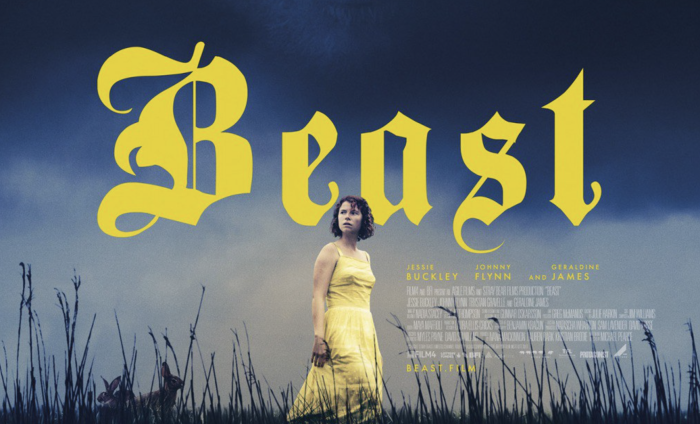 Beast, a 2018 Sundance indie which ultimately played in less than 100 theaters in the States, is a popular choice right now amongst those compiling their “most overlooked films of the year” lists. In fact, I watched Beast yesterday entirely because of a positive write-up in Salon’s list of 2018’s 5 “most delightful movie surprises.” Given that level of hype, Beast is seemingly being set up to disappoint, especially since it is exactly the kind of slow-burning genre bender which alienates casual audiences. However, those who don’t mind that kind of thing in a psychological thriller will find plenty to like, and even those who don’t won’t be able to argue against the following point: Jessie Buckley is absolutely captivating in this movie.

Buckley, an Irish actress and singer who got her first big break in 2008 on the BBC talent show I’d Do Anything, plays Moll Huntford, a 27-year-old Brit who works a passionless job as a tour guide and lives at home with her parents to tend to her dementia-suffering father. She’s a deeply lonely soul who falls in love with someone who just might be a possible serial killer. In different hands, that kind of plot could easily come off like a Lifetime movie meets Fifty Shades of Grey, but writer-director Michael Pearce makes it an intoxicating mood piece.

We first meet Moll at her own birthday party in the backyard of her wealthy parents rather spacious home. Outwardly polite, she quickly shows herself to be more of a caged bird, subtly suffocated by her mother and made jealous of her limelight-stealing sister, who uses the party to announce her own pregnancy with twins. It’s enough to make Moll want to scream, which she only narrowly avoids doing by funneling all of her frustration into the pain she feels after cutting her hand with glass.

Slipping out of her own party in the cover of night, she heads to a club to dance the night away, and when the fella she meets gets rough with her on the beach the next morning a handsome, roguish stranger named Pascal (Johnny Flynn) intercedes to save her. The attraction is immediate and palpable, with Moll viewing Pascal as if he were an alien made of pure masculinity dropped into her life. In her eyes, he is both potentially dangerous and irresistibly charming, exactly the kind of man she’s had no real experience with in her rather sheltered existence.

This lends Beast a surprising amount of eroticism, with Moll and Pascal dancing around one another with obvious interest and the sense that should they ever get together their union will be nothing short of volcanic. Adding to the tension is the way Moll is warned by everyone she knows to stay away from Pascal. That, of course, just makes her want him more.

But, is this just a class difference thing, an example of her elitist family members and friends hating on the lower class? Or is Pascal legitimately dangerous? What, really, does she know about him? And shouldn’t she at least be a little more careful with herself since a bunch of girls in her town have recently gone missing only to later show up dead?

The heart wants what the heart wants and through her relationship with Pascal Moll finds the courage to stand up to her parents and finally become her own person. When he then becomes the prime suspect in the murders, she’s newly isolated, ostracized by a town which views her as guilty by association. The mental and emotional toll just about breaks her, resulting in her finally letting out a blood-curdling, terrifying scream, much to the horror of those who provoked her.

What if, the movie begins to ask via bizarre dream imagery, Moll actually is guilty? What if she committed the murders, not Pascal, but doesn’t remember because she’s suffering from blackouts?

This idea seems increasingly plausible the more we learn about Moll’s past, specifically why she was kicked out of school and had to be home-schooled from 13 on. There’s at least one other potential alternate suspect, and the second half of the film mostly boils down to asking us to decide if we think Moll, Pascal or someone else did it. I don’t love the answer the film ultimately provides, but as a profile of a woman in an initially euphoric and then potentially soul-breaking transition, Beast casts a spell over you, rendering you incapable of looking away from Jessie Buckley’s complete ownership of the screen.

One of 2018’s most-overlooked indies. As with Florence Pugh in last year’s Lady Macbeth, it’s the type of film which will leave you feeling obligated to see everything Jessie Buckley does from now on.

Beast is not currently on any subscription streaming services but is readily available for online rental and purchase. Vudu currently has it on sale for $6.99, just a dollar more than the rental price. So, I went ahead and bought it.

What’s your take on Beast? Let me know in the comments.