One of the most memorable lines in Shudder’s Horror Noire: A History of Black Horror is that for black people American history, in general, has been one long horror movie. As a result, the few African American horror movies which do get made often attain a timeless feel through the sad reality that the race relations they speak to don’t massively improve over time. Horror Noire makes a specific case for this in relation to Darin Scott and Rusty Cundieff’s Tales from the Hood, a 1995 horror anthology which tackles issues like police brutality, spousal abuse, and gang warfare. Which, 100% true.

I wondered, however, if The People Under the Stairs, Wes Craven’s 1991 cult classic, similarly holds up, especially since it’s a movie I liked as a kid but haven’t seen in decades. Luckily, it’s also on Shudder right now.

Faced with an unfair eviction notice from his home in the ghetto, a black teen nicknamed Fool (Brandon Adams) partners with his sister’s domineering boyfriend (Ving Rhames) to rob the home of their wealthy, white landlords, known only to us as Man and Woman (Twin Peaks’ Everett McGill and Wendy Robie). However, what begins as a petty home invasion turns into a nightmare scenario that would cause even the mother from Flowers in the Attic to chide “you took it too far”:

Man and Woman horde their vast wealth in the basement, but that’s also where they keep their prison of cannibalistic teens – all of them boys, all of them maimed, all of them found guilty of having gotten too close to their daughter, the aptly-named Alice (A.J. Lainger). If that wasn’t bad enough, this couple also happens to be hardcore S&M roleplayers, at a time before “safe word” was even a thing.

(And here we thought “semen turkey baster” was truly the weirdest thing uncovered in the basement of a home-invasion-gone-wrong horror movie.)

While there is an inherent racial element to this set-up, Craven doesn’t pursue it as much as he might. Instead, he frames the story far more like a messed up fairytale, one which speaks to his own intellectual curiosities as well as his strict fundamentalist Baptist upbringing. For example, this scene of parental abuse at the hands of a Bible verse-spouting mother is undoubtedly closer to Craven’s personal background than Fool’s time in the ghetto:

This is possibly why Craven’s own contributions to the history of black horror – The People Under the Stairs and The Serpent and the Rainbow – are relatively minimized in Horror Noire: he comes at the topic with the mind of an old humanities professor and the work experience of someone who cut his teeth in exploitation film. It’s an intellectual exercise for him.

Here is Craven, for example, discussing the symbolism of The People Under the Stairs, as quoted in Brian Robb’s Screams & Nightmares: The Films of Wes Craven:

The kids going up against Man and Woman are representative of small groups standing up to larger groups. The house, with all of its claustrophobic spaces and hiding places stands for civilization run amuck. The generations that have lived in it and have gotten more and more crazy until the present one is totally locked in madness. It compares the two sides of normality and abnormality and shows how they interlock. In this piece, the family of the young apprentice burglar is much more intact and normal that this bizarre semblance of a family that lives in the mansion and it’s quite mad.

Because of that, The People Under the Stairs is as much about class warfare, religious fundamentalism (Man and Woman constantly wish their heathen enemies to “burn in hell”), and mythology as it is about race. That makes the film’s ability to still hold up today different than Tales from the Hood. If you see The People Under the Stairs for the first time now and like it, the reasons for that will vary, but unlike Tales from the Hood the phrase “this shit is still happening” probably won’t come up, at least not in the same way.

Yes, the hypocrisy among Conservatives is louder now than ever before.

But The People Under the Stairs isn’t as explicitly about that as Tales from the Hood is about police brutality.

By his own admission, Craven was looking for a story about the powerless standing up to the powerful. In the process, he returned to some of his old dramatic chestnuts, like fractured families, the concept of parents as monsters, and the breakdown of society. In this case, Craven chose race as one of the indicators of the powerless because of, well, history.

As with Nightmare on Elm Street, the exact story idea came to him from a newspaper clipping, this time a 1978 Santa Monica Evening Outlook article about the residents of a white middle-class neighborhood calling the cops about a home break-in being perpetrated by a couple of black men. When the cops arrived they discovered the family being robbed actually had children locked up who were never allowed to see the world. It’s like racial profiling meets IRL Flowers in the Attic:

“It was just one of those stories that struck me with such irony-everybody feeling that the black people breaking into the house was the worst thing imaginable, and there you have this middle-class, perfect family with a terrible secret, not of having stolen television set or something, but the life of their own children.”

Craven was so inspired by this story he managed to rather quickly turn it into an 80-page script called The Puzzle. That was in 1978. It took him another decade to finish because of his usual bugaboo: he didn’t have an ending for the story. In classic Craven fashion, it finally came to him in a dream, resulting in the villains being brutally torn down by their own prisoners:

But is that just meant to be the inevitable comeuppance for an evil stepmother figure or are we meant to be enjoying the poor people’s cathartic revenge against Nancy “The War on Drugs” Reagan?

To Craven’s disappointment, most audiences at the time, myself included, assumed it was the latter. “Siskel and Ebert claimed the two antagonists were meant to be Nancy and Ronald Reagan,” he lamented. “That was not true, it was not meant to be that specific. They’re just conservatives, or actually, people who would elect Nancy and Ronald.”

To defend Siskel & Ebert, it’s very easy to see a lot of Nancy and Ronald in Woman and Man, and it’s not exactly like such symbolism would have been a new thing for a horror movie at the time. From Motel Hell in 1980 to Brian Yuzna’s Society in ‘89, the preceding decade had seen plenty of satirical takes on Reaganism, arguably even Craven’s own Nightmare on Elm Street (the lie of white suburban America, the sins of the parents dooming the kids, etc.).

Still, Craven walked away feeling as if The People Under the Stairs had been misunderstood, perhaps too easily simplified as the film equivalent of something Kanye might say: Ronald & Nancy Reagan hate black people.

Craven biographer John Wooley certainly sees more to the film than that, arguing in Wes Craven: The Man and his Nightmares:

If you reduce the story to its bare bones, what you have is a tale about a young man whose encounter with a pair of evil, repressive people leads to their comeuppance, benefiting those who have suffered under them. Perform a similar reduction on its metaphorical qualities, and it may well represent Jesus Christ’s beatitude about the meek inheriting the Earth

People, after all, is ultimately a parable whose power lies in its simplicity. Craven felt at least one cartoonist got the message: “The only thing I heard about in this country that was gratifying was a political cartoon which ran when Bush was seeking election, which had Bush creeping up these rickety stairs and it had our The People Under the Stairs logo and was captioned ‘Terror on the Way to the Polls.’ Underneath were all the poor and disenfranchised.”

Bush, of course, lost that election due to the recession and a chronic inability to connect with the working class. Just 10% of African-Americans voted for him and less than a quarter of those living below the poverty line did. Craven and so many other liberal-minded horror filmmakers were likely pleased.

Uh-Huh. Is It a Good Horror Movie Or Not? 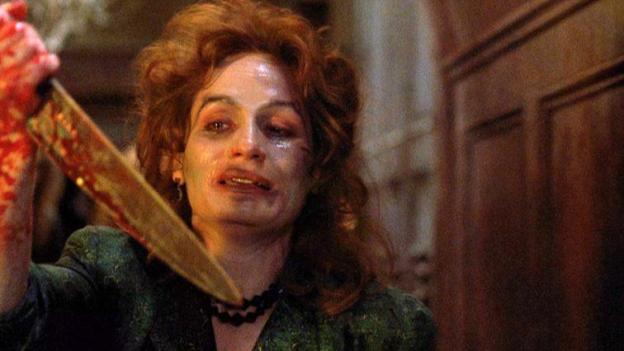 You don’t have to pick up on any of that to enjoy People’s, as horror historian Kim Newman put it, “social cartoon” mixing together Scooby-Doo chase with Wes Craven horror.

Indeed, once Fool is actually in the house and the shock of the situation sets in the film transitions into a series of repetitive chase scenes through a labyrinth-like collection of secret corners and empty spaces. There’s less outright scares than there are pure cartoonish moments like Man taking one improbable blow to the head after another. In classic Craven fashion, Fool eventually escapes but returns to take the fight to the villains on their turf. 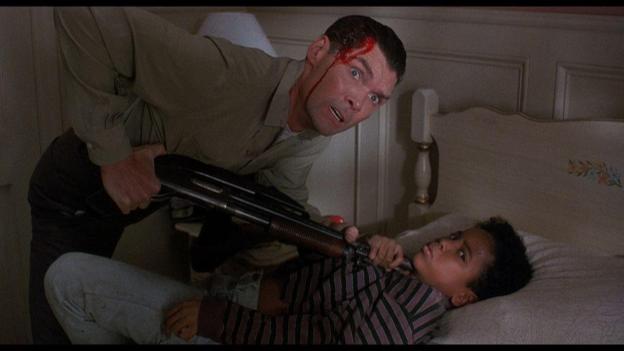 As a child, I viewed such scenes with great horror, especially after the death of Fool and Alice’s endearing helper Roach (Sean Whalen). If one of the kids goes, are the others on the table too? What kind of messed up snuff film are you making, Mr. Craven!

Now, I more clearly recognize the satire as well as McGill and Robie’s scenery-chewing, which is a bit much to a some, a joy to me. It’s also more apparent to me how effective the first half of the film is if you don’t know the twist. The titular people under the stairs are initially presented as the true monsters until we learn who and what they really are. Roach, for example, starts as an unseen horror in the shadows and ends as a lovable, slingshot-sporting hero, like an especially pale Dennis the Menace.

As a film which has already passed its quarter-century anniversary mark, some elements of People show their age, such as the oh-so-clearly-early-90s fashion, closing rap song…

…but the simplicity of the story allows it to hold up as well as most other home invasion movies. Some horror hounds have knocked People as aiming for a Romero-like marriage of horror and social commentary but forgetting the horror along the way. To which I say, how is this not good enough for you?

Does It Hold Up?

Verdict: Yes, but not entirely for the same reasons as Tales from the Hood.

If They Remade It Now, Who Would I Cast?

Fool was originally played by Brandon Adams in his spectacular film debut, and I’d like to see a repeat of that in a remake. Pull a Florida Project and just find someone on Instagram. Or go out and get me the next Elsie Fisher, not in terms of gender but in terms of a great unknown. However, that might not be good enough for financiers, in which case either Caleb McLaughlin from Stranger Things or Chosen Jacobs from It would work. As for the rest of the cast? No idea. Considering that any talk of a remake seems to have died with Craven, it’s all academic anyway. Good thing the original film still holds up so well.

What about you? Take to the comments to let me know your thoughts about The People Under the Stairs.