“I just want to make my weird little movies”

That’s what director, writer, proud weirdo Frank Henenlotter once told journalist Maitland McDonagh, and they rarely get any weirder than his 1988 cult classic Brain Damage, a movie in which a phallic-shaped parasite named Aylmer (voiced by TV horror legend John Zacharley) keeps its human host Brian (Rick Hearst) stuck in a psychotropic haze while feeding on the brains of just about anyone they come into contact with. At one point, the parasite gleefully sings his own theme song – luckily, he has a rather pleasant tenor. More notoriously, Aylmer contributes to one of horror cinema’s most over-the-top oral sex scenes.

Simply put, I wasn’t completely prepared for this when I chose to watch Brain Damage after seeing it pop up on Shudder last week. It’s not so much the horror or gore on display as it is the tone and grime. Few exploitation filmmakers have ever captured the dregs of New York quite like Frank Henenlotter, a filmmaker I was first exposed to last year via Joe Bob Briggs’ Last Drive-In showcase of the director’s debut feature, Basket Case (1982).

HBO’s The Deuce recently spent millions of dollars to turn a three-block stretch of Washington Heights into a passable facsimile of the old rough and tumble 42nd Street, yet one tracking shot in a Frank Henenlotter movie reveals just how truly impossible it is to recreate old, pre-Giuliani New York. This is true of lots of old New York-produced grindhouse and blue movies, but even the sets in those ultra low budget affairs look nicer than Henenlotter’s. 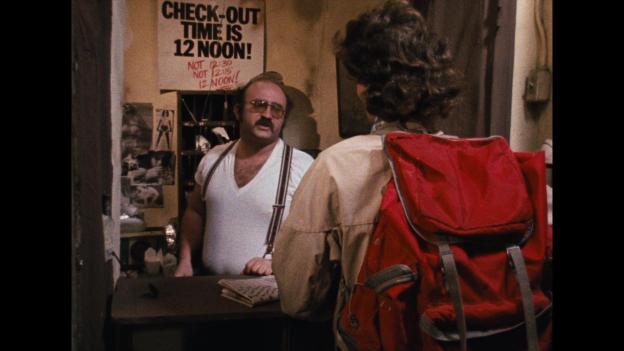 Basket Case, for example, was partially filmed in a welfare motel in mid-Manhattan. According to an interview with the film’s producer Edgar Ievins in Danny Peary’s book Cult Horror Movies, “We can’t mention the name of the hotel, because they threatened to sue if we did. They were worried about the health board seeing the footage.” If you’ve seen the movie you know they were right to be scared. The housing we glimpse in Brain Damage is comparatively more livable, but still not great.

But who is Frank Henenlotter?

He grew up a William Castle-worshipping kid in Long Island before skipping film school and moving to Greenwich Village, where he made a couple of short 8mm and 16mm films. Slash of the Knife, the only remotely commercial-leaning one in the bunch, was deemed too offensive to play in front of John Waters’ Pink Flamingos, which is saying a lot. Still, with the help of producer Edgar Ievins he managed to find some financiers for his feature-length debut, Ooze, but when that fell apart in the planning stages due to commercial concerns he wrote Basket Case as a quick and dirty substitute.

The plot: Duane Bradley carries his psychotic, malformed siamese twin around in a giant wicker basket. Together, they plan to seek revenge on the doctor who did this to them, but when Bradley starts flirting with a local receptionist his brother remembers he has needs of his own to satisfy. 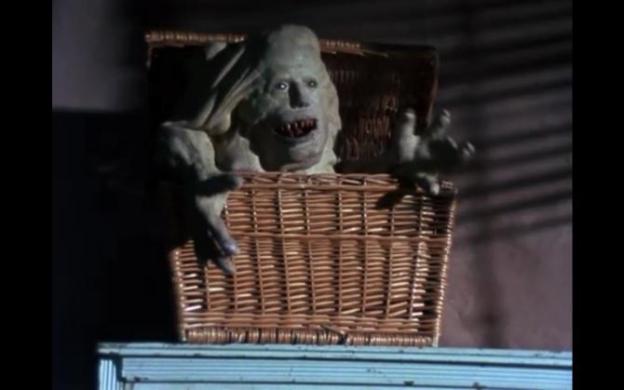 Now a cult classic, Basket Case was a nightmare to make, with props which didn’t work, a crew so disgusted by the story’s rapey finale they walked off set, funding which ran out so often they had to stop the production six different times, and 16mm photography which washed out when blown up to 35mm. Then, after all that, they had a lengthy ratings battle with the MPAA. The nervous distributor excised most of the gore until film critics like Joe Bob Briggs demanded they put it back in.

Yet Basket Case had no bigger critic than Henenlotter himself. “I liked the script and the characters,” he told McDonagh. “But I hated the fact I couldn’t overcome all the technical problems because we didn’t have the money.”

From Basket Case to Brain Damage

It was 6 years before he made another movie. In that time, he passed on countless slashers and rancid no-budget films. His preference: to make something which felt less like product and more like a movie he’d actually want to see. He got close to making that happen several times, but it always seemed to fall through. In a fit of depression, he wrote the script for Brain Damage more or less to amuse himself, or, as he put it, “To keep my mind off my many miseries.”

Sure enough, after Ievins found Henenlotter some money to get the script produced it all almost fell through. The corporate drama got so complicated that at one point Coca-Cola technically owned the rights to Brain Damage. However, it was eventually all sorted out and for the first time since Basket Case Frank Henenlotter was on a set making a movie. This time, he even got to film in 35mm and work with a real budget – $600,000 compared to Basket Case’s $35,000.

Ok, let’s not overstate things. As Kim Newman put it in The Definitive Guide to Horror Movies, “Basket Case is zero-budget filmmaking with trash nerve to spare, and Brain Damage is another bona fide trash classic.” The graininess in the image is gone and the stop-motion animation of the villain is greatly improved, but Brain Damage still trades in the same New York trash aesthetic as Basket Case.

Brain Damage is also far more episodic, lurching from one scene to the next. You’re never quite sure where it’s ultimately going to end up. The story clearly serves as an addiction metaphor. So, you rightfully fear for the safety of Brian’s girlfriend (Jennifer Lowry) and brother (Gordon MacDonald), neither of whom know how far gone he truly is. However, it’s mostly an exercise in watching Brin wander around an especially squalid New York with a constant blissed-out look on his face.

In that state, he’s the type of guy you’d keep your distance from if you saw him on the street. Henenlotter surely saw lots of those types back in the 80s. Brain Damage thus feels like his imagined version of what one of those guy’s stories would look like if it was maybe filmed by Herschell Gordon Lewis. That way, when the junkie tries to quit cold turkey the monster in the bathroom with him can literally sing some songs and taunt him.

The film’s primary appeal is how insane it is, veering from scenes in which a rather erudite-sounding Aylmer speaks in a surprising sing-songy voice to scenes of sudden violence in which Aylmer burrows his way into the heads of poor victims screaming bloody murder. At one point, Aylmer is literally chewing on a security guard’s brains when a drugged out Brian asks with complete hope in his voice, “Is he going to be ok?”

Um, no, he’s not, mostly because nobody in a movie called Brain Damage or just in a Frank Henenlotter film, period, is going to be ok.

The director would later make Frankenhooker, whose plot AND title he completely improvised during a pitch meeting with a producer (and it shows), two Basket Case sequels of varying quality, a literal killer-dick movie called Bad Biology, and various documentaries, including a rather celebrated one about – who else? – Herschell Gordon Lewis.

So, unlike most of the other horror icons of his era it doesn’t take much to catch up on Henenlotter’s filmography. His best films, Basket Case and Brain Damage, serve as odes to long-ago New York and function as the type of WTF horror comedies which are clearly the product of a deliciously demented mind.

And thanks to this cameo in Brain Damage’s finale, we know the two films appear to be set in the same universe.

Basket Case and Brain Damage are currently available to stream on Shudder.