The pop culture geekosphere delivered two new, but highly similar comic book TV shows last weekend. The early critical consensus pegs DC Universe’s Doom Patrol as the slightly superior of the two. Unfortunately, that show releases episodes in old-fashioned, weekly installments. I’m waiting until I’ve seen more of the season to weigh in. I did, however, just finish Netflix’s adaptation of the Dark Horse property Umbrella Academy. I have some thoughts.

That Umbrella Academy descriptor is perhaps a tad too reductive, but it does broadly fit. 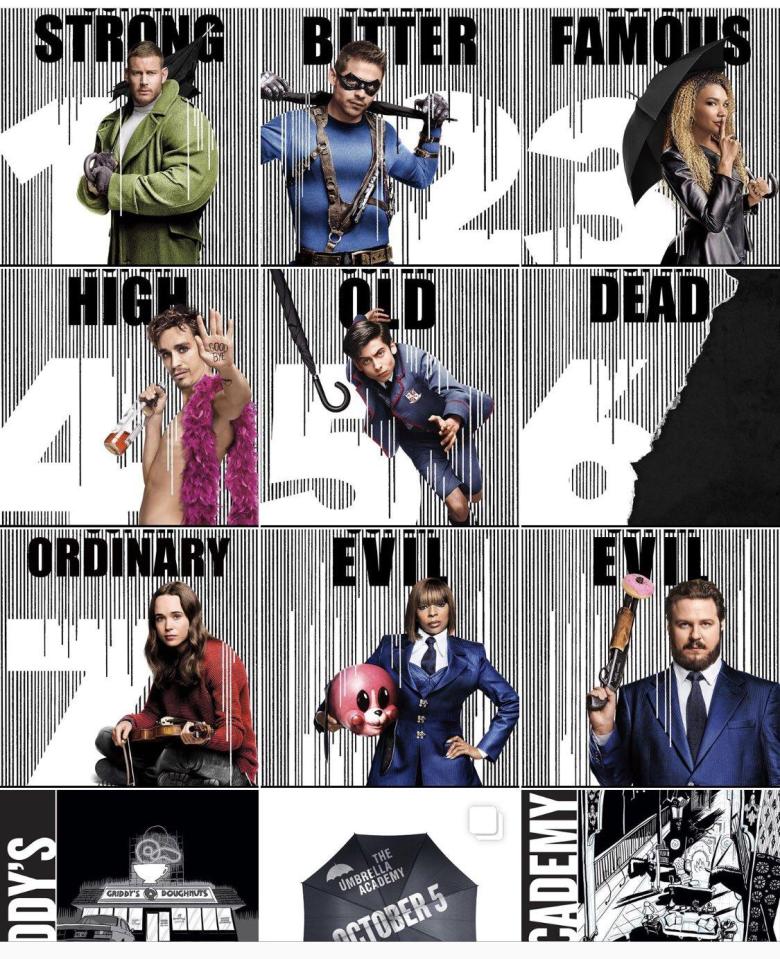 A group of superpowered children who were raised in a mansion/school regroup years later on the event of their domineering father’s death. Like a mixture of Charles Xavier, Dr. Venture, and Gene Hackman’s Royal Tenenbaum, this father, played by Colm Feore, was such a withholding taskmaster that he never even gave them names, assigning them numbers instead along with matching superhero costumes and domino masks.

To meet their emotional needs, he later built a robot mom/nanny who eventually gave them their names: Luther (Tom Hopper), Vanya (Ellen Page), Diego (David Castaneda), Allison (Emmy Raver-Lampman), and Klaus (Robert Sheehan). There was also Ben (Justin Min), who died in battle when they were kids, and Number Five (Aidan Gallagher), who disappeared in a time traveling accident before he could even get a name.

Now a collection of emotionally stunted adults, the surviving Umbrella Academy members have to figure out how to be a family again, at least long enough to bury their dad. However, when Number Five returns as an old man in a young boy’s body and sets about on his own mission to prevent an apocalypse set to hit in 8 days time, the stage is set for, honestly, an almost alarming lack of urgency.

Things do eventually get to the apocalypse and a let’s-save-the-world climax, but since Number Five is very selective about who he recruits into his mission there is an awful lot of these characters – particularly Klaus – just dealing with their own shit, completely oblivious to the countdown to oblivion we are all too aware of.

The Wes Anderson of It All

Initially, this means a lot of Wes Andersonisms. There’s some light incest involved – I say “light” because though the characters grew up as a family they aren’t actually blood-relatives – plenty of quirky pop songs, and center-framed flashbacks depicting the kids training while wearing Tenenbaums’-esque tracksuits.

It’s not quite the “If Wes Anderson Directed X-Men” collection of quirks you might be imagining, especially since YouTube already did that better…

However, in the hands of director Peter Hoar the Umbrella Academy pilot definitely pulls from the Anderson ouvre to establish a visual identity unique among all current comic book shows. As the AVClub argued, “Our welcome to the world of the Hargreaves family often feels like warmed-over Wes Anderson, complete with cutesy character introductions that are more an assemblage of quirks than actual personalities; diorama-like set design that seems to mimic locations in lieu of creating plausible ones; and dialogue exchanges wherein people make pronouncements at one another, rather than actually communicating.”

(I’d also add “a collective fashion sense which seems purposefully stuck in the past.”)

Fittingly then, the early standout scene of the season involves dancing to an old pop song.

The characters are back together in the house again for the first time in over a decade, but rivalries have been quickly renewed and they’ve all retreated to their old rooms. Luther – once their de facto leader, now a towering mass of a man who can’t get any respect – plays an old Vinyl record of Tiffany’s “I Think We’re Alone Now,” an obviously on-the-nose selection, loud enough for the whole house to hear. One by one, the siblings dance in ways which reveal more about their character than their words have. Slowly, the camera pulls out for this diorama-shot:

This moment – while undeniably glorious, splash-page fun – is hardly indicative of everything there is to The Umbrella Academy, though. At the end of the very same episode, there is a fairly brutal fight sequence in which a collection of mercenaries are tricked into killing each other by a teleporting Number Five who keeps intentionally confusing their sightlines. When the cops later arrive to surveil the scene, the lead detective declares with a mixture of schadenfreude and frustration, “I think these idiots all shot each other.”

Of course, this sets into motion the larger narrative of the season – who sent “these idiots,” why does the newly returned Number Five still look like he’s 13-years-old, and what does any of that have to do with them stopping the apocalypse?

As other reviewers have noted, what the show does with its mysteries doesn’t always justify the 10-episode run time, but there is an inherent loopiness to it all which I found highly watchable. For example, this is a series which features a nearly entirely unexplained talking ape butler named Pogo (voiced by Adam Godley), a depressed time traveling assassin (Mindhunter’s always-amazing Cameron Britton) who never can seem to escape his own existential crisis, and later a climactic moment featuring a stolen ice cream truck blaring a jingle version of “Ride of the Valkyries” over its speakers.

So, there’s more than enough WTF to keep you going, a Netflix necessity.

The Not So Good

However, there’s also plenty room for improvement in a hypothetical second season. EW listed but some of the first season’s sins:

Particularities among the characters dissipate. Allison is introduced as a celebrity, and nothing about her fame ever remotely comes into play. There is one major mystery in the season that will be obvious to anyone wondering why a certain character is acting so suspicious. There is an extended tangent involving time travel that becomes, literally, repetitive. A fun hitman couple played by Cameron Britton and Mary J. Blige have a good rapport, but they sit around waiting for missions like bored viewers waiting for plot points.

There is much about Umbrella Academy which rings as familiar, yet there’s little here which I can honestly say simply looks like everything else out there. Instead, this show mixes elements from all over the place into a quirky, unique whole and gets a lot of mileage – probably too much, in fact – out of that old comic book chestnut: a family bickers before remembering to try to save the world. It’s compulsively watchable, particularly as all of the Wes Anderson and X-Men signifiers gradually drop away.

What about you? What are your thoughts on The Umbrella Academy? Do you have a favorite character? Do you think all of the Wes Anderson and X-Men comparisons are overblown? If so, I’d also say there’s a fair bit of The Fantastic Four and Venture Bros in there. Let me know what you think in the comments.