20 movies. 807,449,100 tickets sold in the U.S. and Canada. $17.5 billion in global box office receipts. 8 different movies led by a white guy named Chris. Only two movies directed by people of color, none by women. Only one with a female at least sharing space in the title role, Ant-Man and the Wasp. Last I looked, only two confirmed full-time female members of the Avengers and two for the Guardians of the Galaxy, although after Infinity War half of them are dead…for now.

After all of that, Marvel Studios and the Marvel Cinematic Universe finally has its first female-led superhero movie (Captain Marvel) and first female director, er, co-director (Anna Boden, directing with longtime partner Ryan Fleck). However, rather than give Carol Danvers – U.S. fighter pilot turned intergalactic badass – her own movie they shoved her into a glorified prequel for the entire MCU.

If you’ve ever wondered, for example, how exactly an eye-patched Nick Fury ended up in Tony Stark’s living room with a message about something called “The Avengers Initiative” or if you still have some questions about the plot holes in the first Avengers, this is the movie for you.

If, however, you just want an inspiring story about a woman overcoming great adversity and realizing emotion and strength go hand in hand, especially when you can shoot photon blasts from your fists, you can still get something out of this, but it could have been so much more.

It’s not all bad

The Marvel Studios machine is too fine-tuned at this point to release anything which doesn’t at least entertain. The period setting – 1995 California and Louisiana – leads to plenty of cheap, but effective jokes about the era. (Remember Radio Shack?) The cat everyone fell in love with in the trailer is cuter, yet more surprising in the movie. Once Carol realizes the true extent of her powers, hold on to your butts. Thanos clearly ‘bout to get his ass whooped in Endgame. 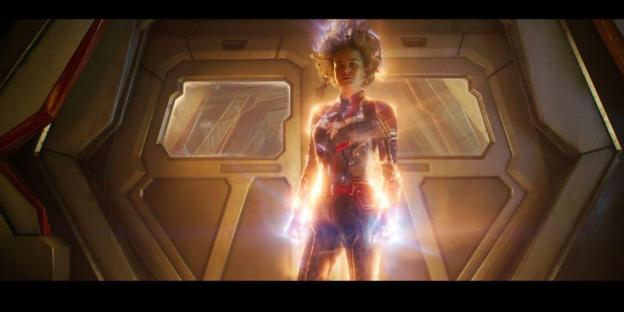 However, after the unmistakable stylistic touches directors Peyton Reed, The Russos, Ryan Coogler, and Taika Waititi brought to Ant-Man and the Wasp, Avengers: Infinity War, Black Panther, and Thor: Ragnarok, Captain Marvel rings as the first MCU title in quite some time to lack a real identity of its own. It’s hard to use the word “generic” in relation to a movie in which Annette Bening, playing something called the Supreme Intelligence, briefly dances to Nirvana, but, it applies here far more than it should. 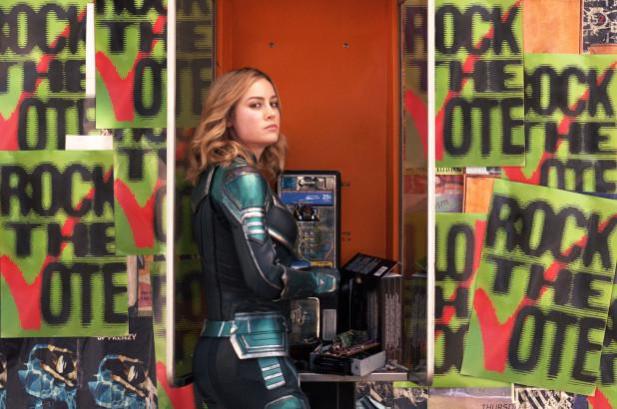 That’s not how this is supposed to go. Marvel hires people who have a strong vision and grasp for story and character even if they don’t know anything about making blockbusters or working with visual effects. Their job: make sure the movie has humor, heart, and characters worth caring about. Everything else will work itself.

Not this time. Boden and Fleck, known for humanistic indie dramas like Mississippi Grind and Half Nelson, seem buried under a sea of MCU easter eggs, 90s nostalgia/soundtrack choices, and run-of-the-mill Marvel action scenes.

A performance betrayed by a bad script 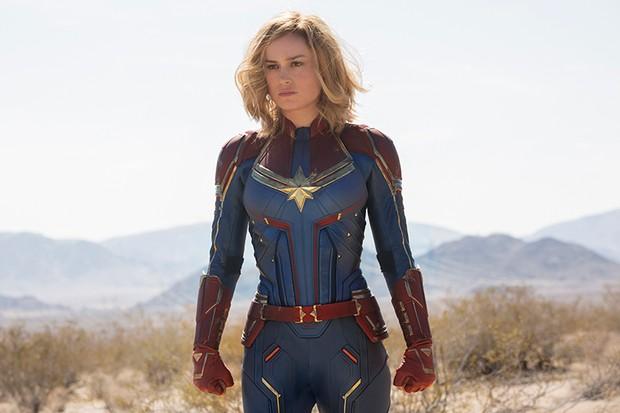 Not helping matters is Captain Marvel herself, played by Brie Larson like she’s constantly posing for an action figure. The script she has to work with – credited to Boden, Fleck, and Geneva Robertson-Dworet – does her no favors, giving her a series of groan-inducing one-liners which seem intended to evoke the blockbusters of the era. The actors back then knew how to deliver those kinds of lines with the right balance of irony and sincerity. Larson’s stab at it just falls flat. Plus, The Long Kiss Goodnight banter/vibe they try to build between Carol and a (convincingly) de-aged Nick Fury is only marginally successful.

Really, the whole thing seems flawed in its very DNA. The storyline so clearly wants to break from the tedium of traditional origin stories while also still ultimately doing a traditional origin story. It’s a common problem in an age in which superhero cinema has become so ubiquitous it’s already been satirized in multiple live-action (Deadpool, Deadpool 2) and animated movies (Teen Titans Go to the Movies!, Spider-Man: Into the Spider-Verse, The Lego Batman Movie). When everyone already knows the tropes, how do you still surprise them?

Captain Marvel’s answer: tell the familiar in a jumbled order. 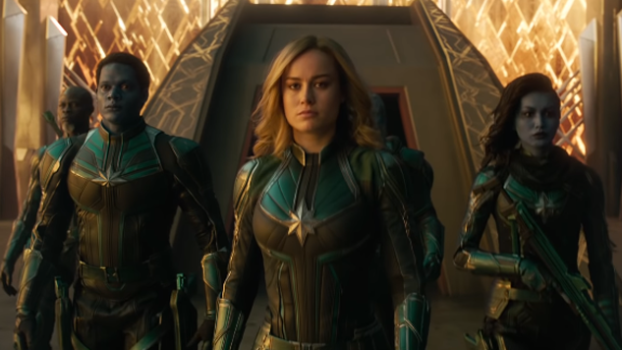 So, Larson opens the movie already powered up and living in outer space, with complete amnesia as to what her life was like longer than six years ago. She doesn’t even know her name is Carol Danvers, going by Vers instead. She lives among humanoid aliens called Kree and works in an elite military united called Starforce. Her mentor, Yon-Rogg (Jude Law), preaches discipline during very Morpheus-Neo Matrix training sessions, though it sure seems like he might also be trying to simply contain her.

When a Starforce mission against an enemy race of shapeshifters known as the Skrulls goes wrong, she ends up on Earth where she runs into early-era SHIELD versions of Nick Fury and Phil Coulson. With their help – ok, mostly just Fury’s help – a race against Skrull leader Talas (a marvelously scene-stealing Ben Mendelsohn) for a MacGuffin turns into a search for the truth about her identity.

The least interesting part of her own movie

That means an awful lot of other characters, like old Earth friend Maria Rambeau (Lashana Lynch), simply telling Carol who she is as she sits and tries to make sense of it all. This kind of identity crisis isn’t new in the MCU. See also: Star-Lord, Winter Soldier. Here, however, it prevents us from ever truly getting to know Captain Marvel as a character beyond broad strokes – barely controlled soldier following orders turned unstoppable hero following her conscience. Beyond that, it means we spend most of the running time simply waiting for her to catch up with what we already know.

She’s a soldier who definitely has a love for the fight. She has a temper and can be sarcastic, but authority figures have taught her to suppress that. She’s spent her whole life being told she couldn’t do things simply because she was a girl, but that just inspires her to get back up and try even harder. 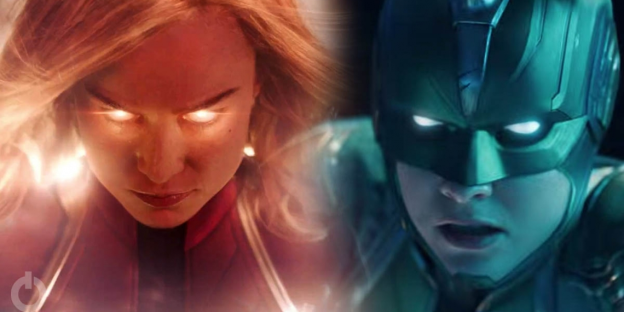 It’s quite impossible to miss that last part. Captain Marvel’s feminist message is loud and proud, but due to the inherent deficiencies in the script we never really get a full sense of Carol’s moral outrage or call to action. Instead, in the end, the whole thing serves as an aggressively unsubtle metaphor for women breaking the chains of their oppressors and owning their own power.

Still, it’s enough to bring a smile to the face of anyone who takes their daughters or nieces to see this movie. In fact, my niece already has a Captain Marvel poster on her wall and I’m sure she’ll soon be flying around her living room, punching through pillows and blankets she sets up to stand in for Carol’s enemies. If so, Captain Marvel will have done its job and all my criticisms will have evaporated into the ether. I’ll be back for the inevitable sequel and will again love watching it through my niece’s wide-opened eyes. I’m just hoping next time around they combine the empowerment messaging with a more clearly told story.

As a jumbled origin story, MCU prequel, Avengers: Endgame set-up, and feminist torchbearer, Captain Marvel has a lot of masters to serve. It’s too much to ask of any one movie. The script puts an amnesiac on a journey of self-discovery but gets a little lost along the way. The lack of tension or a singular, easily defined villain simply adds to the litany of problems.

But the central, feminist metaphor is undeniably powerful. The jokes, as always in any Marvel movie, are there. Jackson and Larson have their moments together, and Mendelsohn can do no wrong. When Captain Marvel finally turns into a glowing, mohawked Superman it looks pretty damn awesome despite feeling a tad unearned.

In short, as a piece of female empowerment, Captain Marvel absolutely works; as a superhero movie, it’s a mixed bag but not so much that it’s going to keep anyone from wanting to see it.