Captive State, Rupert Wyatt’s new sci-fi thriller which virtually no one went to see this past weekend, is not the movie you might be expecting:

For starters, it’s not based on some graphic novel, video game, or old movie, either obscure or moderately well-known. Instead, it’s an original idea dreamed up by Wyatt and his wife Erica Beeney (The Battle of Shaker Heights) and written as a spec script.

Secondly, it is not a first contact or alien invasion movie. It’s about life after the war…a war humanity lost. In fact, as the film explains via a brief video prologue we were so outmatched the only way we survived was to surrender and pledge fielty to our new alien overlords. Nothing unites the U.N. more, apparently, like a common enemy and existential threat to our continued existence as a species.

However, not everyone agrees with the decision to hand over the keys to Earth to a group of powerful insect-like creatures who mean to simply strip-mine the planet for resources. At least that seems to be their plan. In truth, most people on Earth don’t know what’s happening for sure since the aliens only directly communicate with the most senior-level human authority figures.

What everyone does know, at least, is the aliens stay inside of nearly impenetrable green zones in the middle of major cities where they seem to be scouring the Earth’s core for resources. One nuked stretch of Chicago stands as a reminder and warning to those who would dare try to penetrate one of the green zones.

Yet, as the film begins the remaining Chicago freedom fighters gather in the shadows. In the desperate hope of sparking a worldwide revolution, they plan a strategic hit on the aliens – it involves a suicide bomber taking out one of the alien leaders at a very rare public event.

Thirdly, Captive State is not quite the character study promised in the trailers. Young resistance fighter Gabriel (Moonlight’s Ashton Sanders), presented as the face of the movie in the trailers, is actually just part of a larger ensemble which veers between rebels and collaborators. As the film progresses, Gabriel is torn between those two competing forces, with his older brother Rafe (Jonathan Majors) drawing him into the fight and his dead father’s old partner in the police force (John Goodman) leaning on him to work as an informant.

Gabriel is just our in to the story, though. He eventually recedes into the background as the ensemble expands outward, with Wyatt rather matter-of-factly introducing rebel fighters in their daily lives – one’s a mechanic, another delivers their coded message through his job as an ad copy editor for the local paper, The Exorcist’s Ben Daniels even pops up as a possibly gay nightclub performer/rebel.

Together, they represent a cross-section of genders, ethnicities, and sexual orientations. They’re all hiding in plain sight, plotting their attack, and an especially weary Goodman seems to be the only cop who has picked up their scent.

Lastly, the metaphorical hand at play here is not quite as sledgehammer as something like District 9 apartheid commentary. Wyatt’s too busy building out thrilling heist sequences to devote extra energy to drawing direct parallels between the sci-fi scenario of the film and the real world. His inspiration for the story is rooted in historical parallels like Vichy France during World War II or the early years of the Iraq War as well as a love for movies like Army of Shadows and The Battle of Algiers.

Others, however, see his story as a clear Trump-era commentary, particularly since the aliens in the film come to be known as “The Legislators” and those who collaborate with them scoff at an idea like habeas corpus.

If the parallels exist, they were not intentional, as Wyatt told TotalFilm:

“It was never intended to be a polemic on the current administration in America. There’s a degree of increasing authoritarianism in this country, and across the world. So there’s a relevance. But it’s certainly not looking at the notion of what it means to be a Republican with the idea of them being collaborators and good old liberals being the resistance fighters. That would be a little bit too partisan – and I’m certainly not that person.”

Not that this should necessarily stop anyone from reaching their own conclusion about the film’s metaphorical meaning. Wired, for example, is all over it:

Captive State doesn’t need to shout; it works just fine as a contained rendering of the failures of democracy and its bleeding consequences. The metaphors are thick with resonance, rattling with a subdued charge. And though the rebel cell is imagined with a radical tint, Phoenix mirrors the sentiments of social justice factions like the ACLU and Black Lives Matter; in policy and tone, the Legislators don’t seem too far from what the Trump administration is working toward: total, unimpeachable control over the civil liberties of its citizenry.

What I, however, found impressive is actually Captive State’s lack of specificity in this area. Rupert Wyatt and crew work very hard to deliver a taut political thriller about the powerless taking back at least a modicum of control from the powerful, but in classic Rod Serling “use sci-fi metaphor to make the social commentary medicine go down” fashion it comes in the form of a story about humans differing between either rebelling against or working with a literally alien occupying force. 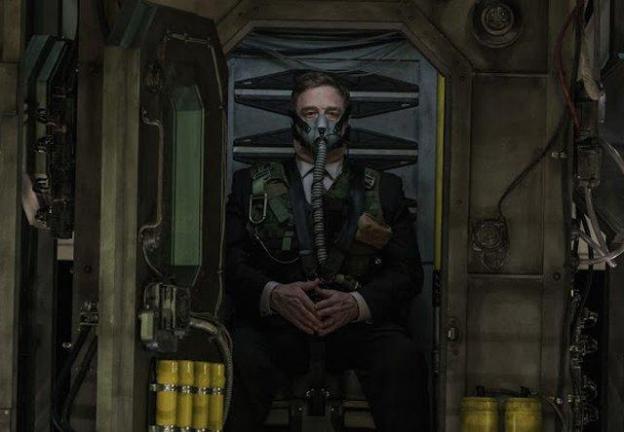 Whatever you want to get out of that, have at it.

What I walked away with is mostly an appreciation for Wyatt’s mastery of tension. The suicide bombing sequence, in particular, is a master class in building tension through editing and music, rivaling some of Paul Greengrass’ best work in that department. The lack of a traditional central character, however, does remove a bit of our rooting interest in the actions, and the rather effective ending is a tad undercut by its predictability as well as Dark Knight-esque “don’t think about their grand plan too much or else it starts to fall apart.”

Still, with solid performances all-around, expertly put-together action sequences, and a definite “let’s all sit down afterward and debate the metaphors” quality, Captive State makes for an interesting addition to the sci-fi canon. Since no one is seeing it in theaters, it’s going to be the best new movie on some streaming service three months from now