The longer any horror franchise runs the higher the likelihood it will eventually enter into a pure camp phase, a time when the creatives involved all agree, “This isn’t scary anymore, is it? Let’s just make people laugh!” Some franchises, like Gremlins and Happy Death Day, do it with their very first sequel, to predictably mixed reactions. Most franchises, however, wait until it’s at least difficult if not impossible to count the number of sequels on one hand.

What happens when the franchise in question was never actually that scary to begin with? What if it was always kind of a comedy?

You end up with Critters: A New Binge, a Shudder exclusive series which – not in terms of quality but in a “things are very different now” kind of way – does for the Critters franchise what Bride of Chucky did for Child’s Play. As was true with Bride of Chucky, it’s not going to be everyone, but for those attuned to New Binge’s brand of campy, sophomoric humor it makes for a perfectly mindless 74 minutes of cheesy comedy.

The logline: “A NEW BINGE picks up the tale of the Critters – hairy, carnivorous, insatiable aliens – from the beloved 1980s franchise. Pursued by intergalactic bounty hunters, the Critters return to Earth on a secret mission and encounter Christopher, a lovelorn high-schooler, his best friend Charlie, his crush Dana, and his mom Veronica- whose past will come back to bite them. Who will survive? And who will be eaten?”

(Fanboy note: Technically, “Critters” is just a nickname used to describe the alien race known as the Krites. Like the logline, though, I’m just going to call them Critters.)

Returning none of the original characters, creators, or creature designers, A New Binge is effectively a franchise reboot. Longtime fans will be curious to drop in to see what those little critters are up to now. Newbies might drop in to see what all the fuss is about. All involved will end up watching something so low-budget even SyFy Original Movies can claim bragging rights.

I’m in the “longtime fan” category. As I previously explained, I was just the right age when the first Critters came out for it to serves as a perfect piece of gateway horror. The three sequels that followed are enjoyable enough, even the much darker 4th entry co-starring Brad Dourif and Angela Bassett (!!), that I actually bought the Scream Factory Critters box set last year. However, the franchise has been dormant since 1992, with the only update coming in the form of the surprisingly solid 2014 fan film Critters: Bounty Hunter.

For several years, there were talks of a potential web series. That appears to have morphed into New Binge, which is split into eight episodes ranging in length from 8 to 11 minutes. Filmed in Canada, it was produced by the same people responsible for the intentionally bad B-Movie Zombeaver.

On top of that, the SyFy Channel has a new Critters movie in the can, one which is rumored to return Dee Wallace, who played the mom in the first movie in 1986.

So, now, a good time to be a Critters fan. If you don’t like New Binge, there’s a full movie apparently set in the old continuity right around the corner.

There’s plenty of reason for longtime fans to cling to that last part because New Binge ultimately feels less like a fresh new start and more like a Critters parody. Some of the Shudder user reviews have been especially unkind: 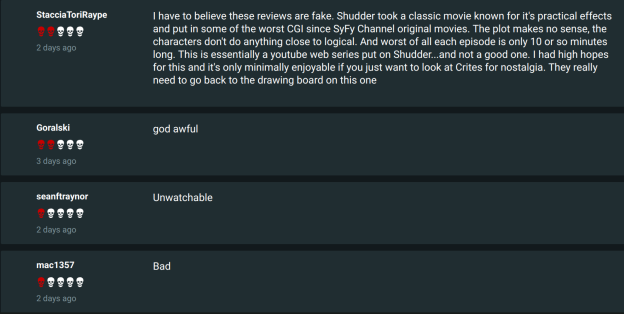 Which, sure. Plus, I’m cherry-picking. There are plenty of 5-star reviews as well. It actually seems evenly split between “love it” and “hate it.”

Isn’t that the inevitable response whenever any horror franchise veers so hard into camp like this? The fact that it also comes with slightly re-designed, cheaper-looking critters and bargain-basement special effects….not helping things.

Yet, there’s an undeniable charm to A New Binge. As someone more drawn to horror-comedy than most, I get a kick out of any show which includes a scene in which a clearly mortally wounded woman – her sides all torn to shreds – optimistically asks a loved one, “On a scale of one to 10, how bad is it? Like, a 4?”

However, all I really ask of a Critters movie or web series or whatever you want to call A New Binge is that it includes some great bits – comedy or horror – with those little hairballs. I’m particularly partial to moments when we actually see what they’re saying via subtitles and discover how much they just seem to love mischief and are always obsessed with eating. New Binge has plenty of moments like that – I have now seen a Critter smoke – and actually has a plot twist in the second half which is legitimately new territory for the franchise.

The original movies are still better, and that fan film probably has better special effects. However, if you think of A New Binge as a campy, almost parodic web-series with an eye toward attracting an even younger audience it goes down easier.

Looking barely more polished than a fan film and exhibiting an even more sophomoric sense of humor than usual for anything Critters related, A New Binge represents the franchise’s inevitable turn toward camp. The jokes don’t always land and the overall effect is more mindless than usual for Critters. However, I had fun with it.

Thomas Lennon – the multi-hyphenate who averages 3-4 film/TV appearances per year and was a co-star on a CBS sitcom as recently as 2017 – must be living off of some serious “fuck you” money these days. Because God knows he didn’t make anything working on Puppet Master: The Littlest Reich last year and Critters: A New Binge this year. That he did both of these ultra-low-budget horror projects tells me he really wanted to do for them just for fun. Good for him.

Critters: A New Binge is currently available to stream on Shudder.