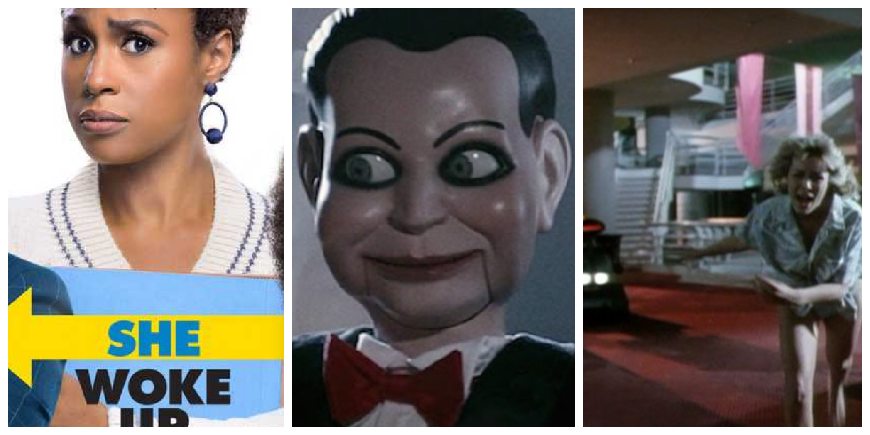 What do these three things have in common?

They do, however, describe the plots of three movies I recently watched and then reviewed on Letterboxd. My takeaway: I really need to start planning out my movie viewing better. Left to my own devices, I end up watching so-so new comedies in theaters and streaming totally random old horror movies on Shudder. Either way, the following mini-reviews might be helpful for anyone with an equally mixed taste in movies.

Backstory: According to THR, Marsai Martin came up with the story idea for Little when she was 10. Let me just say that again: A 10-year-old looked at the bullying problem in her school and dreamed up a reverse-Big scenario for a movie about an adult who magically wakes up as a kid and has to attend middle school again. Three years later, the movie is in theaters, Martin has an official executive producer credit in addition to her co-headlining role, and she’s on the poster with Oscar-winner Regina Hall.

Beat that, every other 13-year-old in the world!

Yeah, but is Little any good?

It’s a perfectly fine mainstream comedy – never truly hilarious, but never boring. Issa Rae, as Hall’s assistant, does her Insecure comedy act to perfection. Hall plays a boss from hell who somehow never gets any employee complaints from HR. And Martin does a good impression of a 38-year-old Girlboss in a 13-year-old’s body. The script admirably, though not always successfully attempts to bake in a commentary on bullying and the plight of women in the tech industry. The formula eventually wears thin and the jokes don’t always land but I got more than a couple good laughs out of it. As per usual, the trailer gives away most of the best bits, including pretty much the entirety of Justin Hartley’s screentime as the hot teacher.

Between Jigsaw, Annabelle, and Billy – the killer ventriloquist dummy in Dead Silence – James Wan has plunged into the “scary doll” horror subgenre more than just about anyone not associated with either the Child’s Play or Puppet Master films. So, if Batman villain The Ventriloquist somehow find his way into the next Aquaman I won’t 100% be surprised.

However, to this point, Wan has only gone 2 for 3 in this department. With Saw and the first Conjuring, he christened instant new horror icons; with Dead Silence, he ultimately failed to get out of his own way. It’s still fun watching him hammer out some of the ideas and techniques he would later perfect, though.

Reteamed with his old Saw screenwriter Leigh Whannell, Wan’s Dead Silence tells the same old story about a hot-to-trot young married couple (a pre-True Blood Ryan Kwanten and Laura Regan) whose latest sexual exploits are interrupted by the mysterious arrival of a killer ventriloquist dummy whose vicious murder of the wife sends the husband into an obsessive search for answers. If I’ve seen it once I’ve…no, actually, this is the first time I’ve seen this exact plot. Kudos.

Kwanten’s search for the truth about the doll leads him down increasingly preposterous roads. It all centers on a small town paying for past sins committed against a quirky ventriloquist performer named Mary Shaw. The ending is so batshit you kind of have to love it. That’s the kind of movie Dead Silence is.

On the downside, Donnie Wahlberg – playing a cop straight out of a Larry Cohen movie – continually pops up to push Kwanten around just when things are getting good. He might as well be called Officer Plot Obstacle, from a long line of Officer Obstacles, no doubt. Also, the familiar “everything made in 2007 had to look super, super blue” problem is as bad as here as any other ‘07 film I’ve ever seen. It’s part of Dead Silence’s over caffeinated and over-stylized feel, with Wan’s transition from the grainy grit of Saw to the old school horror of The Conjuring clearly being a long-term process.

That makes Dead Silence interesting practice for Wan – somehow a lesser effort than both what came before and what came later. Still, much of the perfection contained in The Conjuring’s Annabelle prologue is on the screen here as well, just in limited doses. For example, a locked-room finale sequence pitting Kwanten and Wahlberg against a small army of ventriloquist dummies looking on menacingly from behind their glass display cases…well, that’s just spooky shit right there.

Backstory: Jim Wynorski quickly moved out of Roger Corman’s marketing department and into directing The Lost Empire, a goofy Charlie’s Angels spoof more notable for the size of the actresses breasts than anything else. Russ Meyer would have been proud to call it his own. For his second feature, Wynorski worked with Julie Corman. She had a deal with a distributor to make a horror film set in a mall, and Wynorski volunteered to write it if he could also direct. What he made, Chopping Mall, is now a cult classic. I actually kind of prefer Lost Empire.

Still, I have to respect a killer robot movie which opens with a scene in which a smarmy salesman says something like “nothing could ever go wrong” and then pretty much just five minutes later everything goes wrong.

Also, have to respect the total 80s Wynorski/Corman of it all. For no real reason, the opening credit montage of an average day in the life of a mall devotes most of its time to following voluptuous bikini models as they ride an escalator. When we do finally get the title card we’re presented with a title, Chopping Mall, which looks great on a poster but doesn’t make any real reason in relation to the actual movie. No big spoiler here, but turns out there’s no actual chopping in this movie called Chopping Mall.

Of course, that’s part of the charm of old films from the Corman factory. They are all so brazenly and unabashedly B-movie in every way – slapdash affairs designed to earn a quick buck and briefly entertain the teens and genre movie lovers of the day. Give me that in Stripped to Kill and I’m on board. Not so much with Chopping Mall, though.

The camp value – and always welcome presence of Barbara Crampton –  is immediately apparent and never not fun. The longer Chopping Mall goes on, however, the more it turns into a mixture of a predictable slasher with robots and a quasi-monster movie about a group of survivors trying to outsmart the unkillable machines.

Normally, the mere phrase “slasher with robots” would automatically be enough to earn my lifelong fandom, yet when put into practice here I realize how dependent slashers truly are on memorable villains or carried over-Giallo mysteries over the identity of the killer. Chopping Mall is just cheap-looking robots delivering sick kills. Cool, but only for so long.

Wynorski’s debut feature, The Lost Empire, has far more of a WTF over-the-top feel to it. Add Angus Scrimm as, essentially, the devil and I’d take that film over Chopping Mall.