Game of Thrones “The Long Night” spoilers below

So, Winter finally came, and Westeros’ key characters escaped from the ordeal with a surprisingly low body count, not that this made losing the Mormonts and Theon hurt any less. The undead menace forever looming over the horizon arrived, World War Z’ed up some walls, and played the greatest hits – ya know, raising the dead, not talking, and overwhelming the heroes. As per usual, The White Walkers – the big bad of the Game of Thrones universe introduced in the show’s very first scene – waited until the very end to make their dramatic entrance. Marching through Winterfell untouched, they followed their Night King’s lead and headed straight for their ancient nemesis the Three-Eyed Raven, now embodied by Bran Stark.

Because it’s Bran, he greeted all of this with the same blank-eyed stare as someone who has watched Homer Simpson run on a treadmill for too long. Because it’s the Night King, his underlings held back and watched as he did his thing, which they assumed meant killing Bran.

If ever there was a “here comes the calvary” moment, this was it. Except there was no obvious Gandalf to come storming down a hill with the Riders of Rohan:

Dany and her faithful guard Jorah were surrounded by enemy troops miles away, and the last time we saw her dragons they had been effectively knocked out of the battle. The bravest, biggest, and boldest soldiers – Brienne, Tormund, and Jaime – were relatively nearby but damn well near death themselves. Jon, the show’s ostensible hero, was struggling to get past a blinded, irate zombie dragon breathing ice both out of its mouth and the side of tis face. As the episode’s director put it in the HBO making-of special, this was the “we’re fucked” moment for all the characters.

Bran, the internet’s favorite subject for Game of Thrones fan theories given his ability to time travel and transport his consciousness into other living entities, had to have foreseen this. He’s the one who coordinated this specific part of the battle plan, voluntarily using himself as a bait in the hopes of drawing out the Night King. It worked. The devil had arrived to stare him in the face. Bran didn’t return the courtesy, at least not at first. Rather than greet his apparent killer, Bran stared off into the middle-distance, perhaps focusing on a nearby tree and thinking, “Those leaves sure are pretty.”

I don’t know. Truth is, Bran is a damn mystery these days.

Still, this was the moment for all of his vague “I know more than everyone else” proclamations to pay off. This was the moment for the Three-Eyed Raven to do something amazing. Fan theorists were surely convinced Bran was about warg into the Night King’s ice dragon and take him by surprise. Or maybe the truly far-out theories about Bran somehow actually being the Night King through timey wimey machinations would pay off.

Instead, Arya superhero leaped out of nowhere and over the heads of the stationary White Walkers to send the Night King into the great ice bucket in the sky with a perfectly placed thrust of Valyrian steel into his gut. Instantly, his White Walkers exploded in ice puddles and his army of the undead went limp, transferring from an immediate threat to simply piles of dead bodies and thus a potential public health and clean-up headache for Winterfell’s sanitation department (let’s pretend that’s a thing that exists.)

8 seasons of build up and the White Walkers, in the end, played no active role in their final battle. They were defeated by the old “chop off the head, the rest will fall” trope, and their swift demise came at the small, but lethal hands of a woman with whom they had no prior encounters. Arya, in the showrunners’ summation, presented the greatest possibility for the element of surprise. She’s the one they’d never see coming, and they never did. 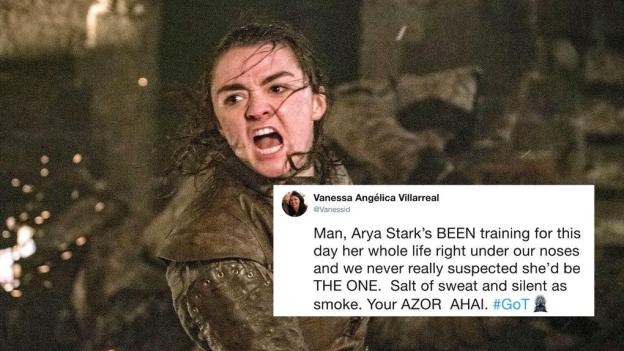 Like Captain Marvel kicking ass to No Doubt’s “I’m Just a Girl,” Diana entering No Man’s Land, Rey calling the lightsaber to her and then using it to defeat Emo Kylo, or Eowyn declaring “I am no man” before shoving a sword straight through the face of the biggest bad anyone had ever seen, Arya’s moment of extreme triumph will no doubt serve as a source of female empowerment for decades to come.

More than that, it’s a “this is why” answer to any critic who grew tired of Arya’s Faceless Men storyline in past seasons and wondered why the show spent so much time with it. Also, now Melisandre’s prophecy makes sense: 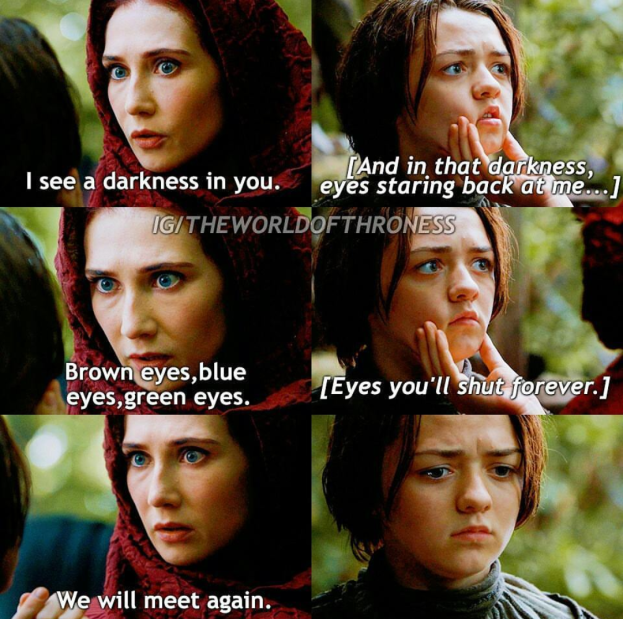 The brown eyes belonged to the Freys she assassinated and the blue eyes to the Night King and White Walkers. As for the green eyes, that’s still TBD. Maybe Cersei Lannister?

We have three more episodes to find out. However, even then we’ll be left with a nagging question: is this really how George RR Martin would have done it?

Correction: is this how Martin is going to do it? Due to him taking on so many side projects as well as his commitment to a “gardening” style of writing where he waits to let the stories speak to him and guide his actions but does nothing until that happens, he’s fallen way damn behind. He hasn’t published a new Song of Ice and Fire novel in 8 years, and at last check nobody has any real idea when the final two books in the series might arrive.

As a result, to paraphrase Marge Simpson Game of Thrones the TV series turned into fan fiction so gradually I hardly even noticed. Beginning the moment the show outran the books and had to create its own storylines, Game of Thrones turned into a work of D. B. Weiss and David Benioff’s imagination. Like J.J. Abrams and Rian Johnson stepping in for a retiring George Lucas with the new Star Wars movies, this new era hasn’t always gone well. Except in that example, at least the Star Wars newcomers got a bit of clean break. With Game of Thrones, Weiss and Benioff initially worked in service to Martin’s vision but have since had to come up with their own ideas for how the author might pay off various prophecies, mysteries, and character arcs.

For example, in HBO’s making-of materials for “The Long Night,” Weiss and Benioff admit they’ve known for the past three years that Arya would be the one to kill the Night King, which means they didn’t actually know that back in season 3 when they filmed Melisandre’s prophecy scene:

So, did Martin fill them in on what that meant? Or did they decide for themselves since they’ve certainly done enough with the series and these characters to earn the right to make their own authorial decisions now? Does it even matter?

The Night King, remember, isn’t even a major character in the books yet, but the show built him up to be the big bad until killing him halfway through the final season without ever giving him a line of dialogue or true one-on-one fight with anyone, not dissimilar to Rian Johnson’s surprise destruction of Snoke in Last Jedi. So, at this point the books and show are two different things, and out of respect for each other neither Martin nor Weiss and Benioff are openly talking about where their storyline ideas might have significant diverged. 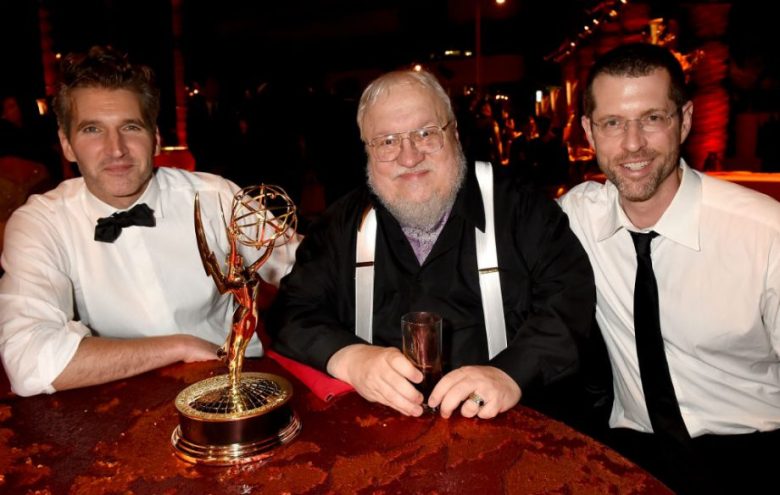 In the process, however, Weiss and Benioff are most certainly going to fail to pay off everything Martin set up or come up with different answers. The internet, for example, is still overflowing with fans desperately clinging to the hope that Bran’s big plan wasn’t as simple as giving Arya the dagger and then sitting perfectly still and doing nothing as untold numbers of soldiers died around him. No, no, no…dude still has another card to play.

Probably not. Maybe in the books, but the show is giving us Weiss and Benioff’s best attempt at a wrap-up. As the AVClub snarkily put it: “More likely than [any new Bran theory] is that we’re nearing the end of a show that doesn’t really know how to wrap up a bazillion loose ends inherited from the novels without spinning entirely off the rails. There is the very real possibility that, in the HBO series at least, Bran doesn’t have much to contribute beyond looming in doorways and saying cryptic stuff about how smart he is.”

The question is whether you’re cool with that. I’ll tell you who’s not cool anymore: The Night King. Because ya know, he’s dead. Arya killed him real good. Personally, it made me cheer. Then it made me feel slightly let down that after all these years the White Walkers were spectators to their own demise. However, given Martin’s Tolkien mimicry maybe he’s also building up to his Eowyn moment and Weiss and Benioff beat him to the punch. Either on the page or on the screen, Arya’s sneak attack is one for the ages.