Crawl has what is to my mind one of the best one-sentence elevator pitches in recent memory: father and daughter fight alligators during a hurricane. As soon as you hear that, you already start cutting the movie trailer together in your head, right down to the mandatory stinger scene where the girl is frantically trying to pull herself out of water as the alligator closes in on her. Will she make it? Well duh. But how, exactly? You’ll have to watch to find out.

It’s for that reason I can imagine screenwriters Michael and Shawn Rasmussen coming to a pitch meeting with a bunch of elaborate story ideas, all of them too complicated to be neatly condensed into a trailer, and getting nowhere before blurting out their idea about Jaws with alligators instead of sharks and set during a hurricane. That’s how you hook a producer like Sam Raimi and director like Alexander Aja on the line. Let’s just make a quick, down and dirty aquatic/survival horror movie!

Sadly, similar to one of 2019’s other fantastic one-sentence pitch movies – Birthburn’s “What if a young Superman turned evil instead of good?” – there’s a big gap here between easily sold and genuinely great. That’s not to say Crawl is terrible or a colossal disappointment. It’s just not the most amazing use of this premise.

The chief culprits: Aja’s entirely unimaginative, by-the-Jaws-playbook direction and a script which rarely ever allows its characters to display a sensible degree of urgency in the face of both a hurricane and hungry alligators. As lifelong Floridians, they are meant to be completely used to hurricane threats while also automatically knowing how to handle alligators –  don’t antagonizing, trust them to stay in their corner. This, however, lends them an odd casualness about everything which works against the film.

The best time for dramatic father-daughter heart-to-hearts, for example, is when you’re stuck in a nearly pitch-black crawl space and have lost total track of the two 500-pound prehistoric monsters who swam in with the flood, or so Crawl argues in repeated scenes which seek to build the drama at the expense of properly maintaining the tension.

That being said, Crawl’s casting department did its job. The two leads – Kaya Scodelario and Barry Pepper – play the material for all its worth, ringing every ounce of heartbreak over their fraught father-daughter relationship. She plays a Florida college swim team member who owes her stubbornness and determination to the years her dad spent coaching her. However, that same stubbornness has stopped her from reaching out to him and offering an olive branch ever since they had a falling out. She only even heads to his house to check on him during the hurricane because her older, more empathetic sister who lives out of town asks her to. All she finds is their cute family dog. That is, until she follows some strange noises down the stairs. 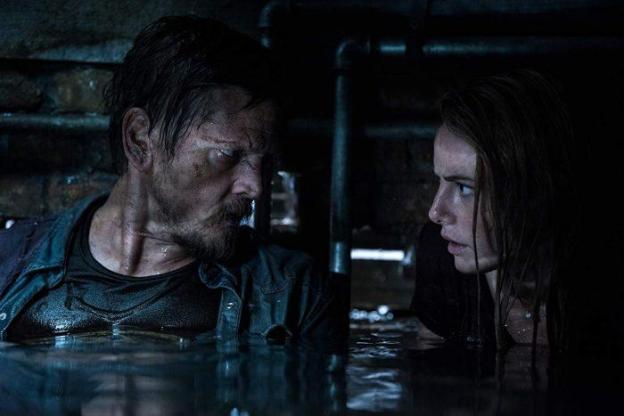 She finds dear old dad passed out and wounded in the house’s expansive crawl space and quickly learns where the wound came from: an alligator. Worse yet, there’s more than just one of ‘em down there. Father and daughter have to work together to survive all while repairing their own relationship, which translates to a lot of scenes of her using her sweet swim skills to evade sure death while dad encourages her from afar. Any poor soul who comes along to help probably ends up as gator food.

All pretty standard stuff for how people think they have to write these kinds of movies. See also: The Shallows. However, there’s a fair bit in here of Scodelario and Pepper doing stupid things the audience already knows won’t work, meaning you’ll end up wanting to yell at the screen a lot, which does give the film an extra sense of dumb fun.

By the end, you might end up caring more about the dog, especially since Aja leans into our collective concern for the furry, four-legged friend’s well-being. Multiple people die horrible deaths throughout, but, dammit, they better not kill that dog! Spoiler, they don’t, but protecting the dog does come at a great cost.

It’s hard, in this specific moment, to watch all of this and not think about Tropical Storm Barry, which is due to pummel New Orleans this weekend. And certainly, any film featuring hurricane-evading characters pleading for help from atop their roof is going to conjure images of Hurricane Katrina and other, more recent disasters. However, Crawl doesn’t really mine this imagery for tasteless manipulation. It’s just a goofy, sometimes thrilling, other times frustrating survival horror movie some people filmed on a soundstage in Serbia with the assistance of background plates captured in Tampa Bay. Actual Florida residents with hurricane experience are having a big laugh about it all:

Anyone who's ever lived in Florida and been through a cat 5 (Irma 2017) knows damn well this is already beyond unrealistic. Where's the hurricane parties? Where's the guys surfing? Where's the managers calling their employees asking what time they'll be in day of landfall?

After surviving a Cat 5 less than 7 months ago (Michael 2018), this movie looks absolutely ridiculous…

Anyone who's ever lived in Florida and been through a cat 5 (Irma 2017) knows damn well this is already beyond unrealistic. Where's the hurricane parties? Where's the guys surfing? Where's the managers calling their employees asking what time they'll be in day of landfall?

If they can have fun with Crawl, maybe you can too. Just be prepared to care a little more about the dog than the humans. However, like most everything else not-Marvel this summer I imagine the vast majority of people are going to sit this one out until it hits some streaming service months from now. Whether you watch it now or later, Crawl makes for an easy 90-minutes of dumb fun, although it does fall frustratingly short of greatness.