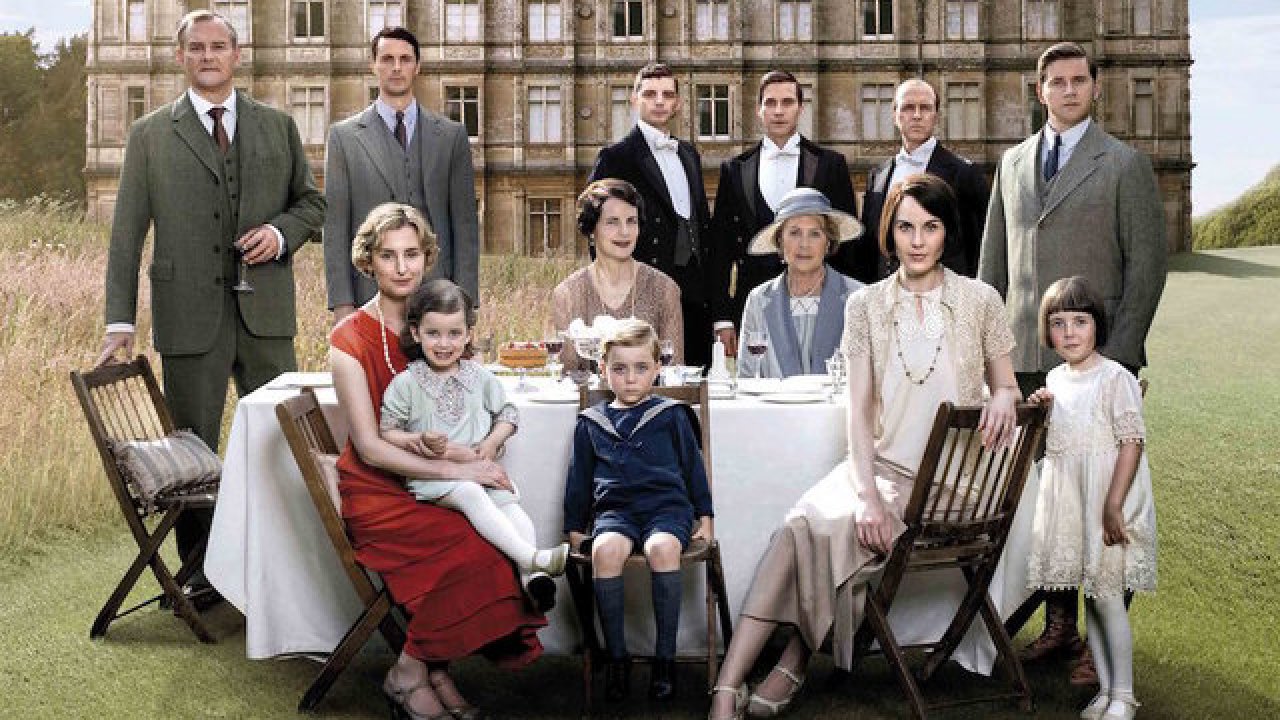 If you walk into my local movie theater right now, you’ll find several screens devoted to Downton Abbey. Just down the hall, there’s at least one screen set aside for the Friends: 25th Anniversary mini-marathon. Head there this Sunday and you’ll be able to watch several different NFL games, a new initiative AMC is beta-testing in certain markets. In a year or so, the first of three planned Walking Dead movies will play in that same theater. Around that same time, David Chase’s Sopranos prequel movie will be released into theaters by New Line.

I thought this was the age of peak TV. So, why are so many TV shows suddenly paying in movie theaters? Is this the start of some weird, new phase in the historically frosty relationship between movie theaters and TV?

Eh, not so much. The larger answer is actually quite simple: Hollywood will take IP wherever it can get it.

The first electronic television was demonstrated to a group of investors in San Francisco on Sept. 7, 1927. It was the brainchild of a 21-year-old inventor, Philo Taylor Farnsworth, and the first image he projected on his rudimentary machine was a simple line. The second image? A dollar sign since an investor asked, “When are we going to see some dollars in this thing, Farnsworth?”

That last part might be apocryphal (or it might simply have been a joke I misinterpreted), but it’s too rich in obvious symbolism to pass up. One of the very first images ever seen on an electronic television was a dollar sign, a crystal clear representation of what various investors and corporations quickly deduced: the ability to move filmed entertainment from public spaces and into people’s homes would make a lot of people very, very rich. Of course, after Farnsworth’s breakthrough, it took another 20 years for TVs to truly start invading America’s living room, but once that process started it went fast.

Despite what every Film History 101 course has taught us, TV was not solely responsible for this downturn in attendance. The average admission price, total screens, and the number of released feature films all played a significant role as well. However, where once there had been no competition now there were millions of flickering TV screens pulling people away from movies. Thus, the following narrative was born: film and TV are in direct competition with one another.

Flash forward to today and it would seem like TV finally won. TV, as the Emmys argued, has never been better or more plentiful. Meanwhile, the studios make fewer and fewer new movies every year, and the list of genres that can be trusted to consistently sell tickets is down to pretty much just superheroes, horror, and family-friendly animation. The biggest, baddest movie studio in the land, Disney, cares more about launching its new streaming service than it does about whether Maleficent: Mistress of Evil makes enough money, and just about every movie star we have left is destined to eventually jump over to TV/streaming. (Pitt and DiCaprio are two of the only remaining holdouts.)

It’s in this environment that Fox Searchlight – the now-Disney-owned specialty studio behind recent Best Picture winners The Shape of Water and Birdman – just scored the biggest opening weekend in its history with Downton Abbey, a two-hour continuation of the long-running, critically adored TV series. Projected to open somewhere in the respectable high-teens, lower-twenties, Downton Abbey, lifted largely by older audiences, took the box office crown with an impressive $31 million.

That had to warm the hearts of everyone working on the Sopranos prequel and Walking Dead movies. Hollywood, historically, has not been above adapting TV shows for the big screen, but apart from Star Trek it’s usually been with entirely new cast members (the TV actors replaced with movie stars, if possible) and continuity and delivered with self-aware flair. Think of films like The Brady Bunch Movie, The Flinstones, 21 Jump Street, The A-Team, Starsky and Hutch, Baywatch, Charlie’s Angels, and The Addams Family. Picking up where the original TV show left off and continuing the story with the same actors, on the other hand, has usually been seen as the riskier option. Will audiences actually pay to see something they’d already been getting for free on TV? And won’t anyone who never saw the show feel completely lost and alienated by a movie?

Sex and the City and its $415m worldwide gross begged to differ with such industry naysaying. On the opposite end of the financial coin, Entourage, Absolutely Fabulous: The Movie, Veronica Mars (which was crowd-funded and thus truly just made for the fans), Reno 911: Miami, and Strangers With Candy all flopped with wider, moviegoing audiences. Even the poorly-reviewed Sex and the City sequel took in significantly less than its predecessor. Whether you had the biggest show on TV or one of the most obscure – love ya, Strangers With Candy – getting to a point where people will actually pay to see what happens next in the characters’ lives has never been easy.

All of that seems like it happened in a different timeline, though, because everything changed in Hollywood after The Avengers cracked a billion worldwide. Post-2012, what the studios want now are multi-platform performers and cinematic universes, but not even Marvel has perfected that. For all the good you can say about the dearly departed Netflix Marvel shows and Agents of Shield, they remained value-added treats for the fans but nothing more as far as the larger Marvel Cinematic Universe was concerned.

That hasn’t stopped the competition from trying, but the old assumptions have largely held. You simply can’t get people to pay to see what they are used to getting for free. If you could, CDs would still be a thing. So, we have seen studio after studio experiment with attempting an alternate route: using major movies as backdoor pilots for TV shows.

The Dark Tower – that unfortunate Idris Elba/Matthew McConaughey Stephen King adaptation – failed at the box office thus killing all the plans for a follow-up TV series. Marvel tried to get us to pay to see the Inhumans pilot in IMAX but forgot to make a show worth watching. Paramount’s Wonder Park – a largely ignored 2019 animated kids movie – was the first entry in parent company Viacom’s new synergy-heavy strategy of attempting to use movie theaters to launch IP which can later end up as a Nickelodeon series while also reviving multiple old Nickelodeon shows and putting them into movie theaters. Given Wonder Park’s $45m domestic gross, it feels safe to say that strategy is not off to a great start.

So, if you can’t use a movie to launch a directly continuing TV show do you go back to again trying to the Sex and the City thing – making movies that drop back in on all of the beloved characters several years later? Jury’s still out. Downton Abbey, like Sex and the City, could ultimately be an outlier. However, Hollywood will try just about anything to cut through the cultural clutter, and to fans of shows like Downton Abbey getting to see a new story with your favorite characters but now on the big screen still feels like an event. More than anything, however, Downton Abbey is IP, just like Sopranos and The Walking Dead, and “IP emboldens us all” is the new Hollywood mantra.

At the end of the day, it’s just about trying to sell some damn movie tickets. The studios want butts in seats, and the theaters want people in lobbies buying concessions. To that end, back when TV first launched its aggressive attack on cinema attendance in the 50s Hollywood responded with gimmicks and bigger budgets. The same history has played itself out since the launch of streaming services like Netflix, but here in 2019 and going forward we might have a new wrinkle: what if people will pay to see TV shows in movie theaters?

Historically speaking, it probably won’t work, but with the right IP, it’s worth a try.