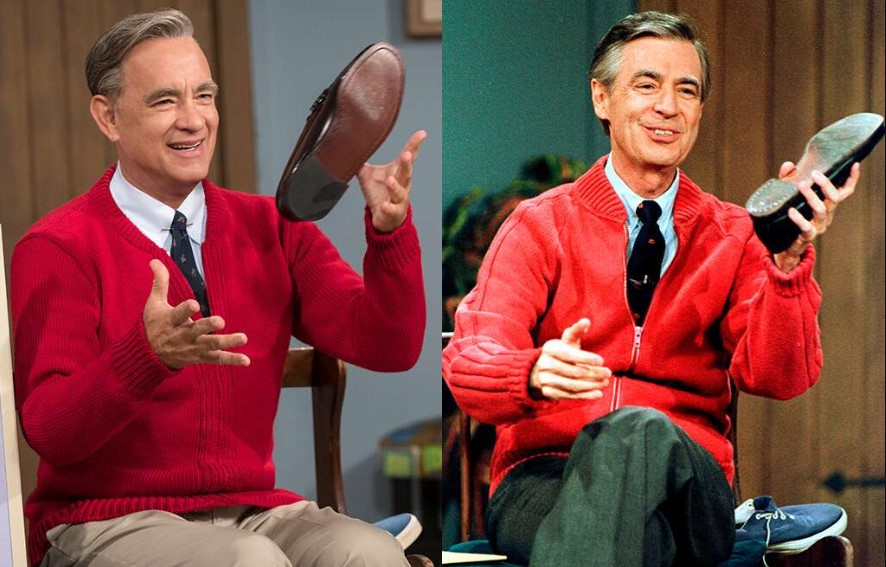 One of the great surprises of Morgan Neville’s documentary Won’t You Be My Neighbor? is that when it comes to Fred Rogers there’s no there there. Neville didn’t discover any skeletons in the man’s closet. His documentary didn’t bring about a woke reckoning, that all too familiar moment when the latest great white hope (looking at you, Trudeau) or cherished historical icon fails to meet modern standards of decency. No, as Neville discovered the most radical thing about Fred Rogers is that he was exactly who he appeared to be for the entirety of his career as the host of Mister Rogers’ Neighborhood: a deeply empathetic, purely kind, absolutely loving soul.

Still, it’s hard for us to truly accept that. How could a public figure so preoccupied with helping little kids not turn out to be a pedophile? How could someone who talked with the verbal urgency of a sloth not be playing a character? Simply put, how could someone be so nice and stay that way for so long? Doesn’t the world chew people like that up and spit them out before breakfast?

Not Mr. Rogers. His calling was to help people, and he devoted his life to the belief that the best way to help was to teach kids how to cope with the world. This message resonated with people last summer when Won’t You Be My Neighbor debuted and promptly became the highest-grossing biographical documentary of all time. In this age of tribalism, the world needs more of Mr. Rogers’ ethos: be kind and good to one another.

A Beautiful Day in the Neighborhood – director Marielle Heller’s (Can You Ever Forgive Me?) sideways Mr. Rogers movies – is an obvious companion piece to Won’t You Be My Neighbor?. Whereas Neville made a cradle to grave bio-documentary, Heller and her screenwriters Noah Harpster and Mica Fitzerman-Blue have made a feature film told from the point of view of a Mr. Rogers skeptic.

The lead character of this particular story is Lloyd Vogel (Matthew Rhys), a fictionalized version of the Esquire writer Tom Junod. In 1998, Junod was assigned the task of interviewing Mr. Rogers and putting together a 400-world summation for an issue about heroes, a task he resented since he thought of Mr. Rogers as some weirdo who “played with puppets.” Several Mr. Rogers meetings later, however, he turned in a 10,000-word cover story that was as much about him and his struggles as a new father as it was about Mr. Rogers. A Beautiful Day in the Neighborhood is a fictionalized version of just what happened there.

The story behind the story is quite simple: a cynic was told to write a puff piece about America’s nicest man and came away changed for the better, helped by Mr. Rogers just the same way so many children had been over the years. Beautiful Day in the Neighborhood is thus a fairly straightforward tale of redemption and emotional breakthrough. Heller and her screenwriters seem to sense as much and deploy several neat tricks to add some cinematic heft to the proceedings.

Most notably, they run with a surprising framing device: present everything as if it’s one long episode of Mister Rogers’ Neighborhood. Thus, we open on Tom Hanks doing a spot-on Fred Rogers impression, singing “A Beautiful Day in the Neighborhood” as he changes out of his suit coat and into a sweater and out of the loafers and into some sneakers. The actor, of course, nails every tic down the finest detail, like how Rogers would playfully zip up his sweater all the way to the neck and then immediately right back down to his chest, just below the microphone on his shirt.

Perfectly adopting Rogers’ signature, slow-paced vocal cadence, Hanks addresses the camera and introduces us to today’s lesson: how to let go of anger. We’re going to learn all about that, Rogers informs us, by hearing about his friend, Lloyd Vogel, who we see via a rather unflattering image on Fred’s picture wall. Why does Lloyd look so angry, and what’s with the bruises on his face and nose? The camera then zooms in on the picture and the story truly begins.

It’s a truly ingenious way to open the movie, aping the conventions of a Mister Rogers’ Neighborhood episode to spell out the themes of the story while also introducing Mr. Rogers to audiences who might not be familiar with him. (I’ve come to understand he’s not exactly a household name outside the U.S.) The further into the movie we get, though, the more this framing device recedes into the background, though it never fully goes away. From beginning to end, for example, every single establishing shot is presented as a Mister Rogers’ Neighborhood-style miniature.

This is hardly the only cinematic track up Heller’s sleeve. She also throws fantasy sequences and cathartic hallucinations at us, occasionally erring on being too cute by half. Still, in one critical moment, she trusts Rogers to break the fourth wall and stare directly into the camera.

Spoiler, in this particular scene, Rogers – seated at a diner – has just challenged Lloyd to stay silent for an entire minute and simply give thanks for everyone who made him who he is. The musical score disappears. There is zero audio whatsoever. It’s the moment for Lloyd to finally let go of the hate he feels toward his deadbeat dad (Chris Cooper), but rather than linger too long on Rhys’ face Heller cuts to other people in the diner, all of them falling magically silent as if Rogers’ order had been directed to the entire room and not just at Lloyd. Happy faces turn sad and then happy again. Single tears drop down cheeks.

And then Rogers looks at us and he keeps on looking. I don’t know how long the shot actually lasts, but in the theater last night it felt like forever. Stop focusing on Lloyd, the movie is telling us, and take a moment to ponder the people you’ve lost and everyone you still have left. Learn the same lesson Mr. Rogers is teaching Lloyd: hate eats you up from the inside. You have to know how to move on and accept that the most radical thing you can do sometimes is to offer forgiveness.

In that way, A Beautiful Day in the Neighborhood is similar to Won’t You Be My Neighbor? Both works ultimately prioritize the message over the man, Beautiful Day especially. If you want to see Fred Rogers actually lose his temper, it does happen in Beautiful Day but not for a long, long time, and even when it does he turns out to have the healthiest method imaginable to deal with it. If you want to actually know more about him, Won’t You Be My Neighbor? has interviews with all the people who knew him and plenty of archival footage. But, ultimately, both works aim for the heart, showing us a preacher speaking to his flock through puppets and morality plays, leaving us to marvel at how much difference one man can make by simply being too pure for this rotten, rotten world.

What about you? If you didn’t grow up on Mister Rogers or maybe didn’t even have him available in your corner of the world, who was your kids TV show host of choice? Let me know in the comments.