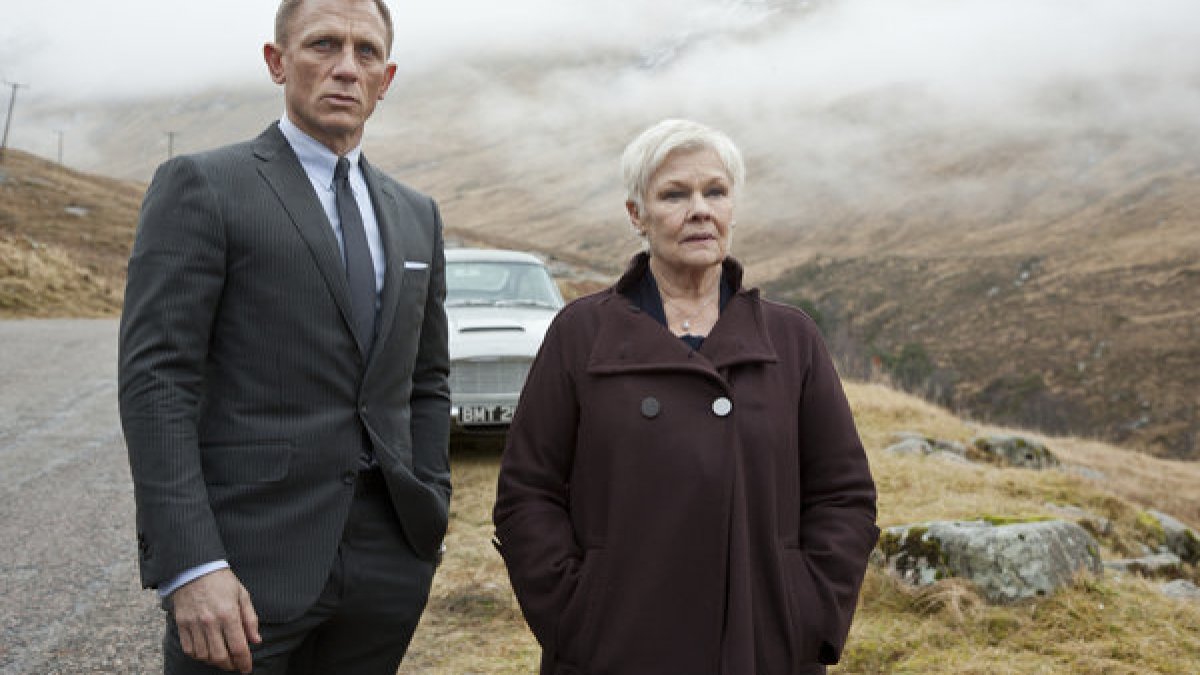 2012 marked the year of James Bond’s 50th anniversary. The pressure was on to commemorate the milestone in a fashion worthy of the icon. The fascinating thing about Bond is everyone who loves the franchise has their favorites. I don’t mean just favorite Bonds, favorite Bond films, or favorite villains, but favorite gadgets, favorite Bond girls, favorite henchmen, and favorite action sequences. We know who Q is, how Bond takes his martini, and that he’ll always have a retort in the face of a newly dead body. For better or worse, Bond has attained a pop culture ubiquity. The trick is keeping him familiar enough for classic fans but innovative enough for Bond newcomers. It’s a difficult balancing act, but one director Sam Mendes, current Bond Daniel Craig, and screenwriters Neal Purvis, John Logan, and Robert Wade proved could be done.

If Casino Royale took its cues from the Bourne Identity, Sam Mendes’s Skyfall would pull from Christopher Nolan’s The Dark Knight, which had managed to make a comic book movie feel like a gritty, character-driven, heist film without sacrificing spectacle and larger-than-life villains. With Skyfall, Mendes takes the same approach with the James Bond franchise. In borrowing from Nolan’s playbook, Mendes turned Skyfall into a franchise high point, crafting a film that blended both the heightened Bond film tropes with truly devastating character development. It both pays tribute to Bond’s past, including his iconic Aston Martin, while also sculpting his future.

Bond movies vary greatly in quality, but there’s a formula they all tend to follow. There’s an action-packed opening minimal connection to the rest of the film, a verbose, disfigured villain, a girl with whom Bond will work, various double-crosses, all leading to an action-packed finale. Skyfall doesn’t exactly break that mold, but it pushes against and stretches that mold in ways that makes the film more thrilling and emotionally involving than a Bond film has any right to be.

Skyfall opens with Bond pursuing a suspect who has stolen a hard drive containing information about agents operating undercover. Bond is fighting the suspect on top of a train that is about to go through a tunnel, while another agent (Naomi Harris) watches the encounter through a rifle aim.

She doesn’t have a clear shot, but M (Judi Dench) demands she take it anyway. Bond takes the bullet and falls into a river, presumed dead. However, when a threat from an individual with an apparent grudge against M emerges, Bond feels obligated to come out of hiding.

If there’s one thing Craig’s tenure as Bond has emphasized, it’s the character’s ability to be broken, both physically and emotionally. Once Bond returns to the fray, forsaking the opportunity he had to finally lead a normal life, the movie goes out of its way to give him a gaunt and physically debilitated appearance. His eyes appear sunken, his face hardened. He appears a shell of who he once was.

Events force him to rebuild himself, especially when facing a villain (Javier Bardem. And his hair) with more than a few Bondian parallels.

It all culminates with a finale that owes more to Straw Dogs than it does to anything Bond has ever done before.

Making us care about Bond, despite his ruthlessness and occasional cruelty, is always a necessary but tricky proposition. Craig manages the feat by conveying the emotional damage always lurking beneath the character’s coiled surface. There’s something upsetting about seeing him struggle to accomplish tasks that had to have once been effortless. Note the way Craig plays the realization that he no longer has his flawless marksmanship.

He’s horrified and humiliated, unsure how to even process the ways in which he is no longer qualified to be an agent. It shouldn’t feel like a significant loss. In fact, it should feel almost absurd, but both Mendes and Craig play it for what it is: the loss of everything Bond had to define who he was as a person. Without his skills, he’s just a broken, traumatized man. The moment is played completely straight.

Skyfall is a film about mortality, about characters forced to accept the world has moved on around them, whether it’s Bond, who comes home to his belongings in storage and his apartment gone or Dench’s M, who finds herself perceived as a relic of a bygone era, forced into retirement by a younger, incoming authority figure.

Even Bardem’s Raoul Silva, a former MI6 agent sacrificed for the “big picture,” contends with the fact that he was so easily forgotten. It’s a story of individuals who have been cast aside.

The film becomes M’s swan song, giving her character more shading and complexity, with an underlying poignancy, than she’s ever had before. She’s the closest the film has to an actual “Bond girl,” the one woman Bond truly isn’t prepared to lose. Skyfall manages to justify the casting of an actor of Dench’s stature for what has always been a relatively minor role. It took nearly twenty years, but the franchise finally gives her M an arc, and she plays it to the hilt, crafting a perfect blend of poignany vulnerability and a steely resolve that only Bond echoes. If you end the movie slightly misty-eyed, the response wouldn’t feel inappropriate.

That’s not to say the film risks collapsing under the weight of its own portentousness. It’s still a Bond movie, with spectacular action sequences, including that fabulous train opening. But everything, from giving us more information on Bond’s childhood, the emphasis on M’s past, and the villain’s personal vendetta, feels like an attempt to make the film feel more personal and character-grounded. The emotional stakes anchor the flashy action sequences, making us care in a way few Bond films do.

It also gives us one of the franchise’s best villains. Bardem’s Silva, with his Assange-esque bleach-blonde hair and odd, lilting cadence, feels at once patently absurd and absolutely unsettling. He’s theatrical in a way that feels deliberate and planned. If there was a scene of him rehearsing his entrance prior to his introduction, it would feel in keeping with the character. His introductory scene flirts with gay panic, until Bond diffuses it with a well-timed retort.

It’s a Bond cliché that a villain always talks more than he should, but Silva is theatricality masking an unquenchable rage, putting on a show because he wants to. He brings the same kind of elevated horror to the role that Heath Ledger managed to bring to the Joker.  There was talk of giving Bardem an Oscar nomination for his role, and even though it didn’t happen, it would have been a justifiable nomination.  It’s a brilliant, ferocious, deliciously uninhabited performance that contrasts nicely with a Bond lacking in his usual prowess and suaveness.

Despite the way it humanizes Bond, Skyfall also serves a bridge between the cliché-eschewing Casino and Quantum and the fizzier, comforting world of Bond’s past. We get a new M in Ralph Fiennes and a new, younger Q in Ben Whishaw, who manages to poke some fun at the franchise’s past by quipping, “What were you expecting? An exploding pen? We really don’t go in for that anymore,” while bestowing Bond with a high-tech gun and radio.

We even have a new Moneypenny in Naomie Harris, who seems less madly in love with Bond than warmly affectionate. Skyfall takes Bond back to his beginnings, clears away the debris, and sets the stage for a James Bond that is both modern and charmingly old-fashioned.

If the film has a flaw, it involves its treatment of the female characters who happen to not be named M. While there’s something a bit disheartening to see Harris’s Eve (eventually revealed to be Moneypenny) decide to take a desk job rather than remain a field agent, it’s the film’s treatment of Sévérine (Bérénice Lim Marlohe) that raises the most eyebrows. I don’t have any difficulty rationalizing Bond responding to her death, with his “waste of good scotch” line.

I think Craig’s face manages to convey horror and disgust that he tries to mask with a cruel joke. His fallibility indirectly gets her killed, and he’s having to cover his revulsion in any way he can. It’s an interesting way to change the feel of the morbid jokes that have defined the Bond franchise.

More troubling, however, it the film’s decision to present her a a victim of sex trade, have Bond deduce that facet of her backstory, and then choose to approach behind her when she’s in the shower and have sex with her.

I don’t expect Bond films to be feminist treatises. They’re never going to really be that gender-forward, although some films are better at this than others. This choice just smacks of wrongheadedness, and I’m unable to discern any rational for giving her that backstory and thus making her sexual encounter with Bond seem anything but unnerving. Perhaps it’s supposed to feel unsettling. Maybe it’s two damaged people trying to connect with one another, but the movie doesn’t make that intent clear enough. It just doesn’t quite work, and I’m not certain the movie knows how wrong the encounter feels.

Really, though, this film is about Bond as a character and the maternal bond he has with M. The film soars when it focuses on the ways in which the narrative emotionally impacts their characters.

I remember the anxiety I had watching Skyfall. After the elation of Casino Royale and the dour Quantum of Solace, I had a need for it to live up to the former’s promise, rather than the latter’s disappointment. However, once that opening was done, Bond had fallen into the river, and I was met with Adele’s dulcet tones, I heaved a sigh of relief. I was in good hands, and I trusted the film to carry me along. I didn’t expect something a jaw-droppingly good as the movie I got, but I felt safe that it was on steady footing. When the film’s final frames wrapped and the opening credits kicked in, I just sat there, completely in awe of how strong the film was, how emotionally satisfying it managed to be. I’d stopped thinking I could be knocked out by a Bond film, but Skyfall managed to remind me that a film, regardless of genre, can be as substantial and nuanced as the filmmakers are capable of making it. Skyfall is a top-tier Bond film, and if the franchise never quite manages to hit this kind of high again, I’m still glad it managed it once.